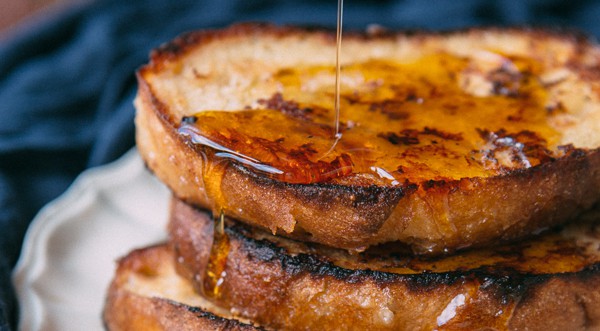 Brunch just doesn’t feel complete without French toast—am I right? But don’t worry, no chickadees need to die and no mother hens need be kept in a tiny cage for months on end for this recipe. In fact, you really don’t need eggs at all to make a fluffy, easy vegan French toast that is uber-delicious.

We turned to vegan chef duo Masha and Michael to bring you a great recipe for vegan French toast. As the founders of The Minimalist Vegan, this passionate pair is on a mission to eat the best food while living mindfully. They’ve concocted a book full of vegan recipes that excite the palate while also remaining kind to animals, our bodies, and the planet. So without further ado, here’s their recipe for vegan French toast. Enjoy!

Why You Should Make This Easy Vegan French Toast

You don’t need an excuse to make this deliciously sweet and satisfying vegan French toast but in case you need a little encouragement, we’ve outlined a few awesome reasons below. Whether it’s the fact that it’s super easy or that French toast is simply divine, you’ll be oh la la-ing all through brunch with this beautiful and delectable dish.

What makes French toast so delicious is the fact that it combines so many different elements to make a dish that is downright delicious. The sweetness from the maple syrup paired with rich bread and a hint of saltiness is a recipe for rejoicing. Let’s bask in the ingredient breakdown:

How to Serve Up Your Easy Vegan French Toast

When it comes to serving up the ultimate vegan French toast, sometimes all you need are a few different sides to make everything truly come together. Here are some ideas to help you make the best brunch possible!

Author: Masha and Michael from The Minimalist Vegan

5 from 8 votes
Delicious vegan french toast that is soft and plushy on the inside and crispy on the outside. Perfect drizzled with maple syrup and paired with a bowl of fruit salad for brunch! 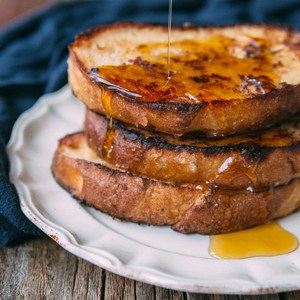 Cover photo by The Minimalist Vegan. Article written by Amanda Meth. Please note that this article contains affiliate links which means shopping through them helps lights on at World of Vegan!