Don’t wait until Taco Tuesday to break out these brilliant, bite-sized meatless treats! No tortillas need apply for these crispy cups made from wonton wrappers that hold all the savory, spicy goodness within. Turn any meal into a fiesta, whether it’s a party, potluck, or weeknight dinner for the family. Vegan taco cups are the versatile snack or starter that will steal the show.

Whether you prefer crunchy shells or soft tortillas, you’ll get the best of both worlds here. Crispy edges give way to a warm, gooey interior for a wholly satisfying experience. Believe it or not, they’re even as much fun to make as they are to eat!

Why You’ll Love This Recipe

Tacos are incredibly popular in the US, and the numbers don’t lie. Americans eat somewhere around 4.5 billion tacos every year! With this recipe at your disposal, those stats might rise even higher. Here’s why you’ll be hooked:

Like standard tacos, the sky is the limit when it comes to garnishes and accompaniments. Anything goes, and there’s tons of opportunity for variation even in the base ingredients. You could make these every day of the year and never eat the same thing twice!

Fresh or frozen, made of peas, soy, mushrooms, or otherwise, myriad plant-based options are readily available in every market for all taste preferences! You can even find some that are pre-seasoned with Mexican spices, if you’d like another easy shortcut. I used a shelf-stable vegan taco crumble from Plant Boss.

For a sweeter, bolder, and richer tomato flavor, go for canned fire-roasted diced tomatoes instead of fresh or plain varieties. A light charred brings out the natural sugars in the fruit in perfect contrast to the smoky, umami flavor imparted by the fire.

Many wonton wrappers are naturally vegan. Eggless wonton wrappers are readily available at all Asian grocery stores and even many mainstream supermarkets. Look for them in the produce section near the tofu, although they may be hidden in the freezer aisle by the frozen vegetables, too.

Melty, mild plant-based cheese is ideal to go with a spicy filling, so a Monterey Jack, Cheddar-style, or blend would be your best bet. If you can find Mexican-style shreds, that will be perfect! Daiya, So Delicious, Miyoko’s, and Parmela are just a few of the options that exist today. Check out our Battle for the Best Vegan Cheddar Cheese video to see which brand won!

Thick and lusciously creamy, dairy-free sour cream is a staple I always have on hand. Just add a dollop to pasta sauces, soups, and even salad dressings for next-level healthy indulgence.

Also known as scallions, they’re related to chives, leeks, and white onions but have a milder flavor, so they’re generally better for eating raw.

For a final pop of fresh flavor, nothing beats a tiny ripe tomato! Regular diced fresh tomatoes could work too, but they won’t be quite as pretty. 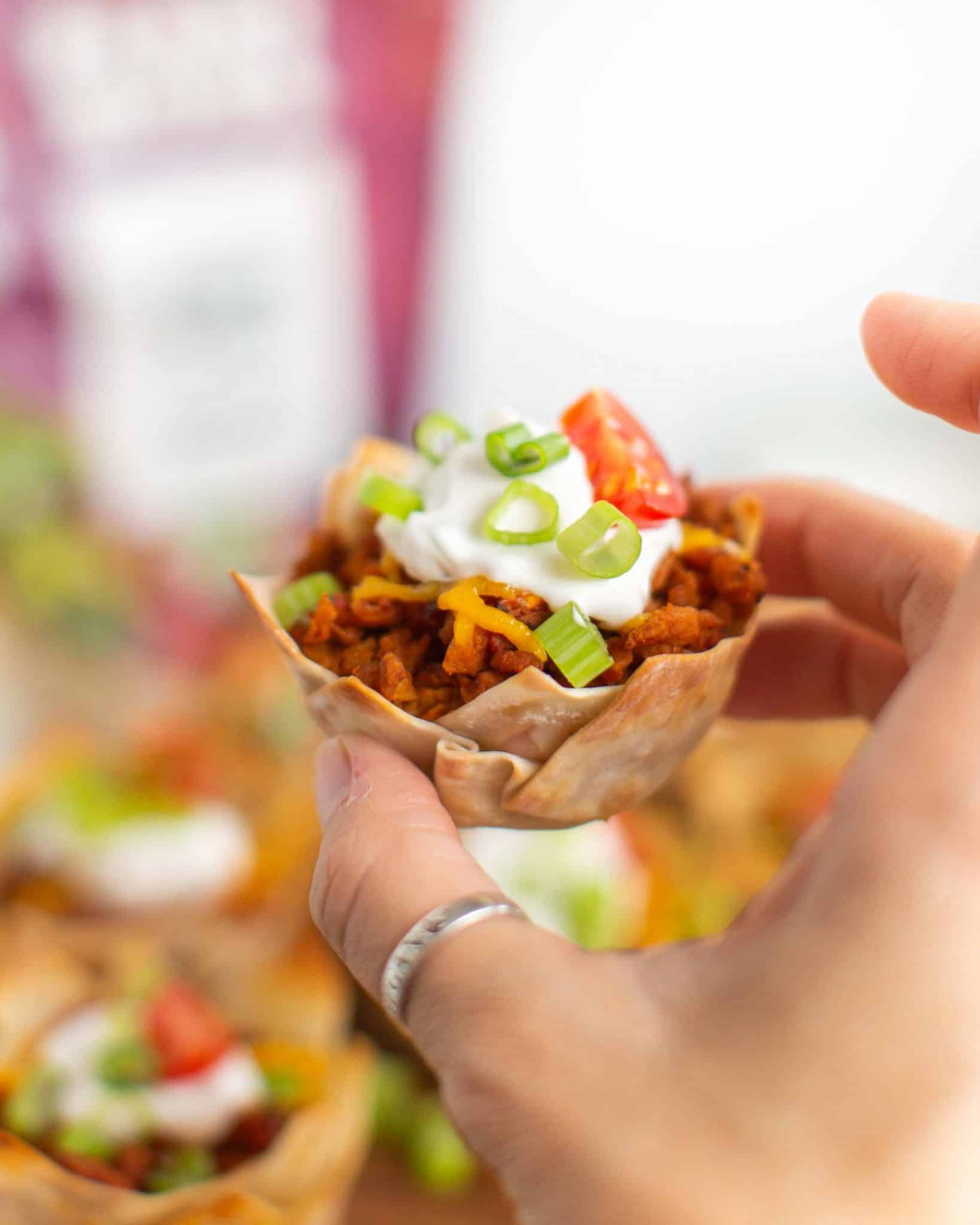 How to Spice Up This Easy Vegan Appetizer

Consider this recipe more like a guide, providing the basic inspiration and foundation to build upon. Use your imagination to create all new flavor combinations, tailored to your preferences. Here are a few more ideas to get you started:

What to Serve with Your Vegan Taco Cups?

Although they’re perfect as is, you can turn transform this appetizer into an entrée with a few easy sides to round out the plate.

These taco cups will be your next party’s BFF. They’re great at almost any event, especially:

…shoot, these would even be divine serves up at as appetizers at a vegan wedding! 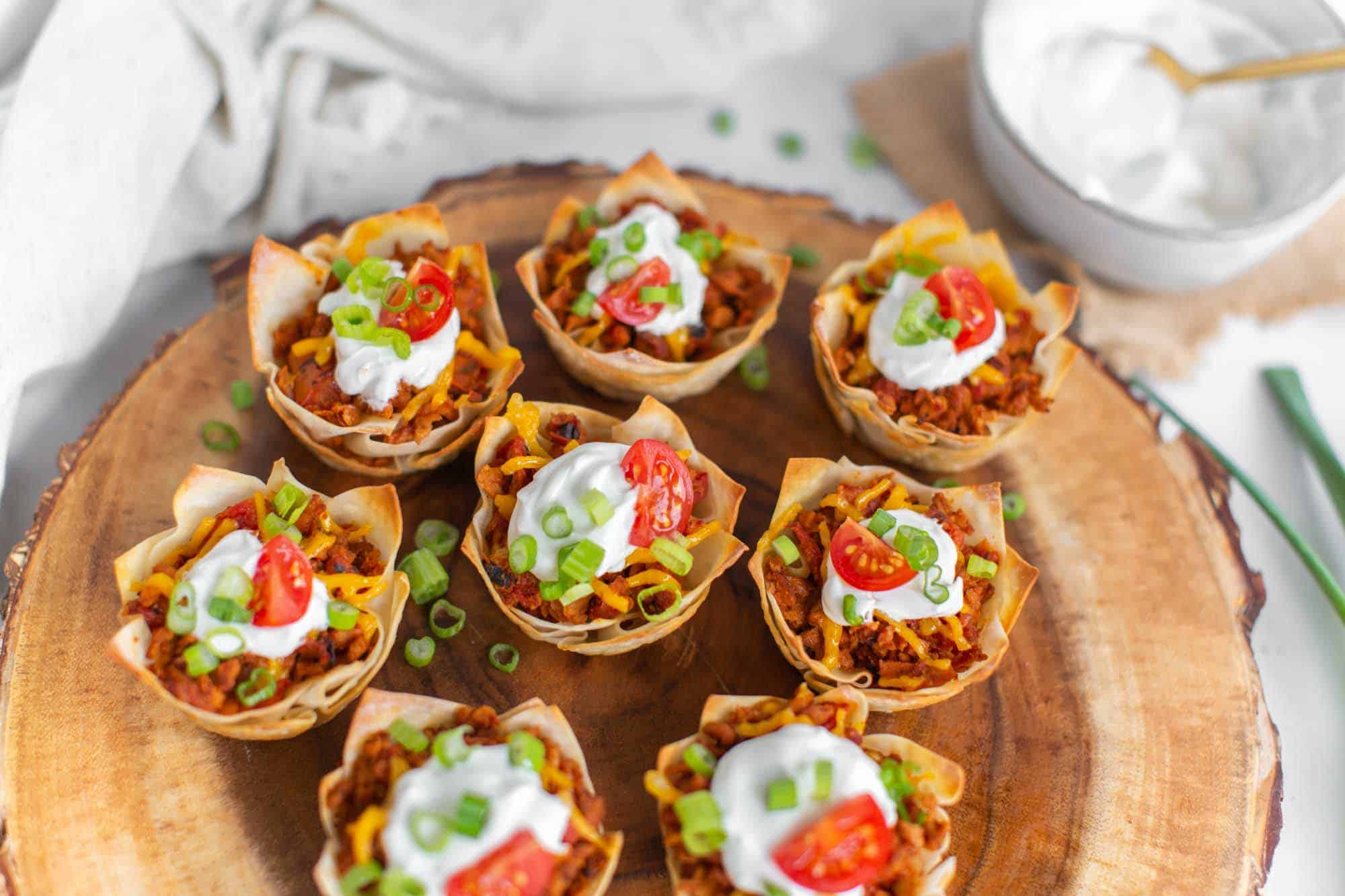 How to Make These Vegan Wonton Cups

Assembling your edible vessels is the most complicated part of this procedure, which is to say, it’s very simple! Don’t be daunted; you’ll be a pro after the first round.

Author: Michelle Cehn (Adapted from Dinner at the Zoo)

5 from 7 votes
These delicious taco cups are an easy, fun, unique vegan appetizer you can make with wonton wrappers and your favorite vegan ground meat! Serve them up at a party, gathering, potluck, or as a snack for the family. They'll be the talk of the party, guaranteed. Ready, set, BAKE!

Course Appetizer
Cuisine Mexican
Keyword appetizer, dairy-free, mexican, party, plant-based, vegan, vegetarian
If you try this recipe for vegan taco cups, let us know what you think by leaving a comment and rating below! Be sure to follow along on Pinterest, Instagram and Facebook for even more vegan recipe inspiration. 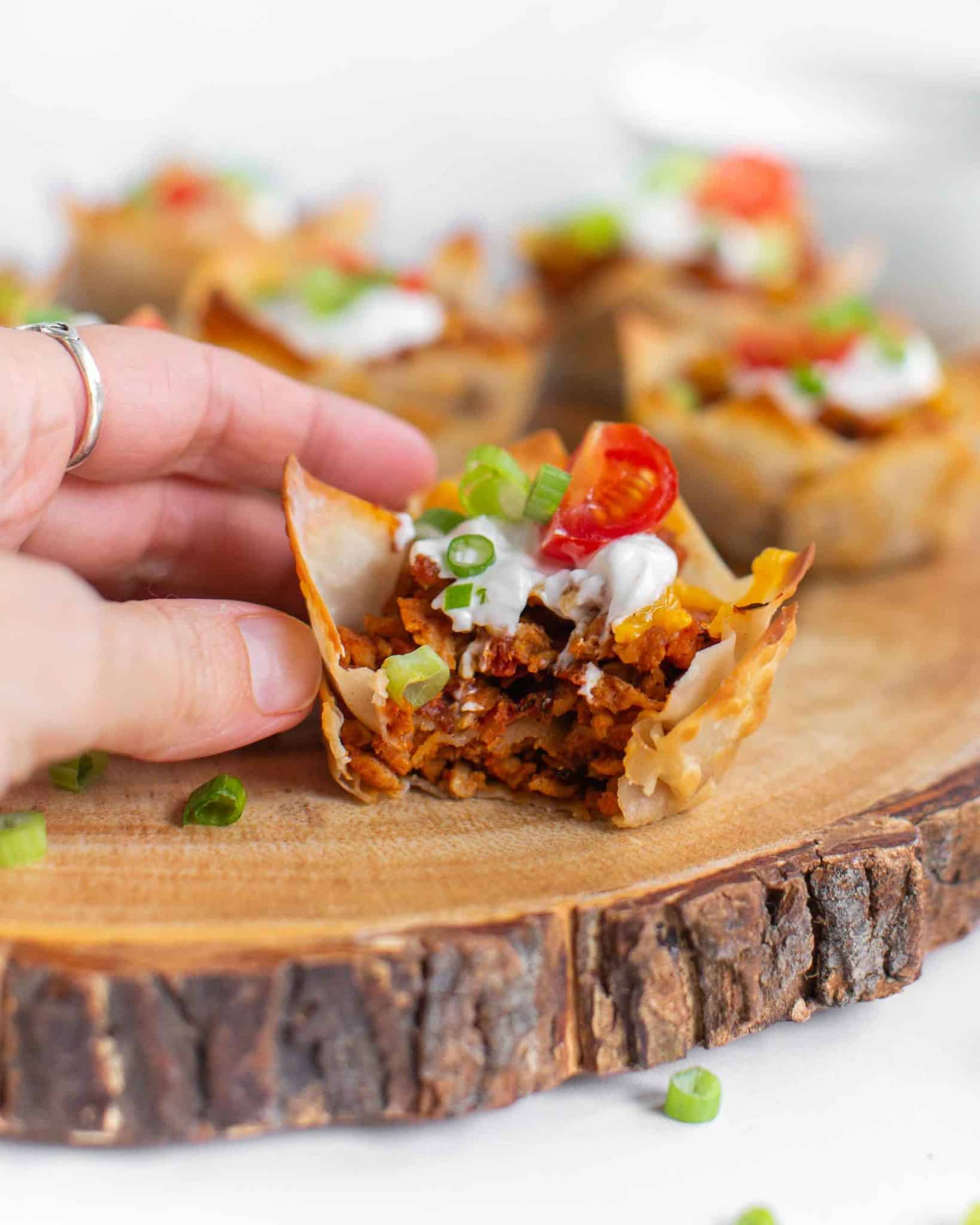 More Vegan Mexican Recipes for Your Next Taco Night:

Vegan taco cups photos by Michelle Cehn. Article written with support from Hannah Kaminsky and edited by Amanda Meth. Please note that this recipe for vegan taco cups may contain affiliate links which supports our work at World of Vegan.