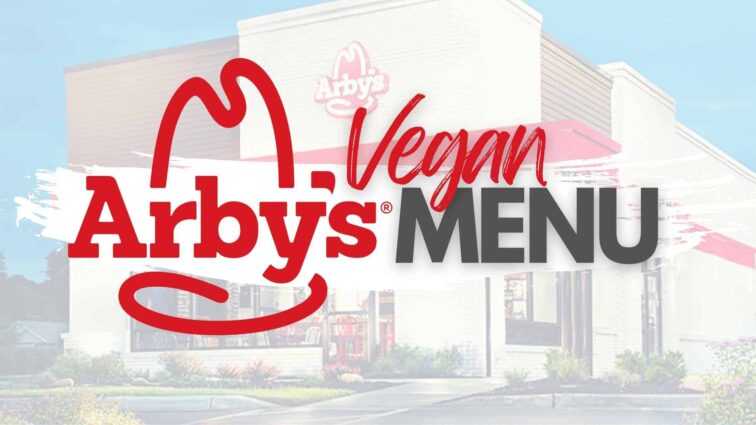 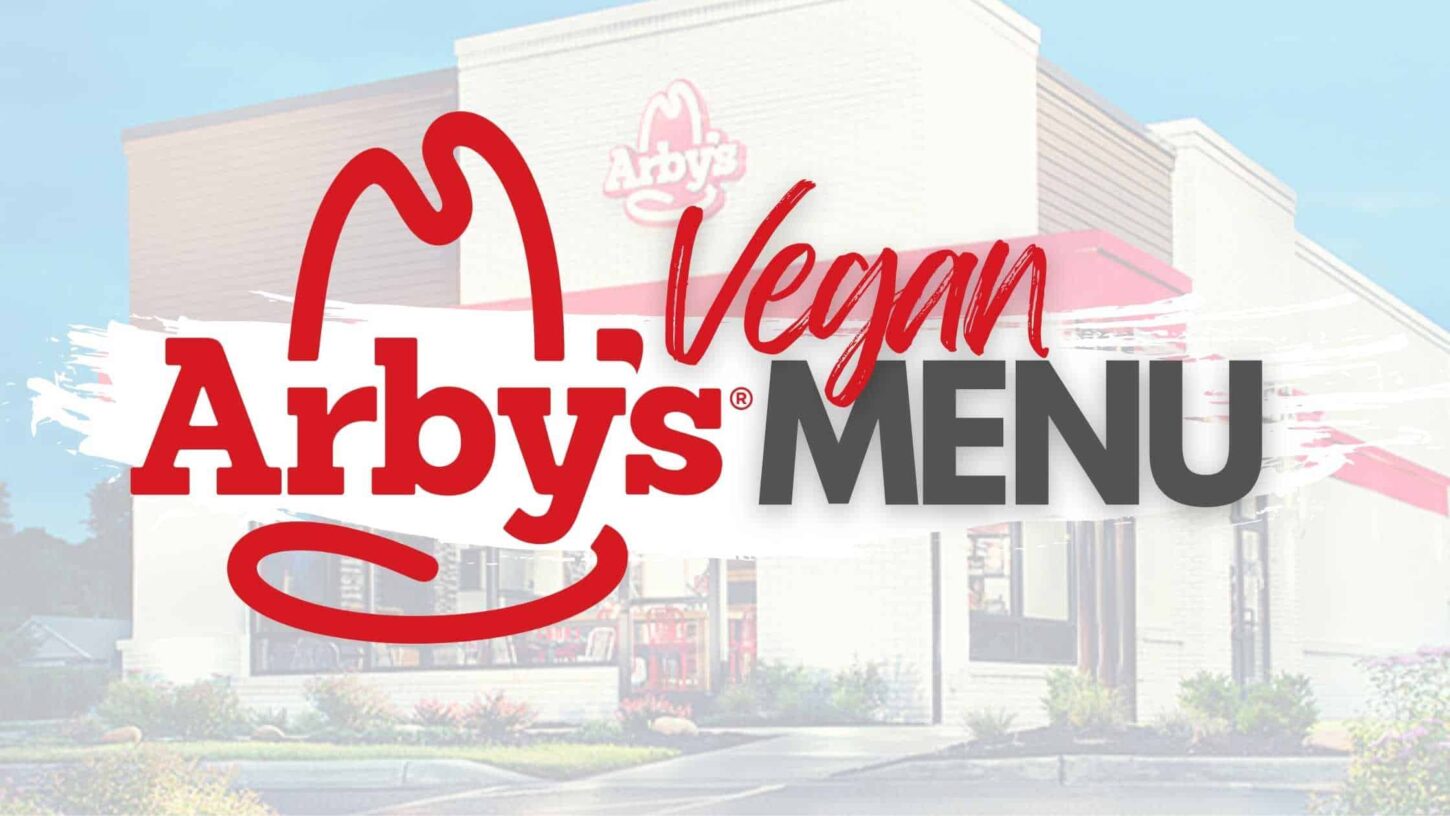 Looking for appetizing vegan options at Arby’s? No problem! We’ve listed everything vegan on the menu and how to order both breakfast, lunch, and dinner. Just beware, your options are limited. We cover Arby’s salads, sides, veggie burgers, fries and curly fries (which are vegan!), the allergen menu, and even if there’s an Arby’s kids meal. Keep reading for any and all things Arby’s vegan and vegetarian.

Vegan options at Arby’s are few and far between. Though, not as bad as some fast food restaurants. We must admit that there are a few tempting treats that we would probably try, like the potato cakes, french toast sticks, and curly fries. Also, the Arby’s sauce sounds intriguing. For a restaurant with over 3,300 locations, you would think they’d be fighting for a chance to be on top of the plant-based fast food chain.

Because an Arby’s veggie burger is essentially non-existent, we have to wait patiently for a plant-based protein to appear on the menu. Or, more importantly, a kick-butt Arby’s vegan burger! Although Arby’s has clearly stated there they won’t be adding any animal-free burger in the future, but we can’t give up hope. Right?

How To Order From Arby’s Vegan Menu

There are a small number of edible items on the menu, but this is one of the many non-vegan restaurants where ordering can be somewhat simple because there almost no options. Take our lead and you’ll find yourself enjoying a basic breakfast or very light lunch in no time! This is what to do:

Example of an Arby’s Breakfast:

Since this is truly your best bet for any sort of satisfying meal, we encourage you to order one of everything. It may not be the healthiest meal, but it’s got some substance.

Note: You may want to bring your own mini container of maple syrup for the french toast sticks.

While there are several small suggestions for vegan food at Arby’s, our whole food, plant-based friends will have even less options. If you’re strictly WFPB vegan, Arby’s has very little for you. The only items on the menu to choose are the applesauce and the side salad (with no cheese).

It’s pretty hard to be tempted by a bun with nothing in it. You can fill either of these buns with lots of lettuce, tomato, onions, and peppers, but we feel like it wouldn’t really do the trick. For the very brave, bring in your own plant-based patty to plop in the middle of this muddle.

Arby’s salad is on the small size, but at least there is an option for extra veggies to be added to your meal. If you buy two, you can ask for extra vegetable toppings and enjoy with a side (or two!) of your favorite shaped fries.

One question we’re asked often is, “Are Arby’s curly fries vegan?” We’re happy to say that they are. The crispy onions, on the other hand, are not. A mix of all three fry shapes may be the way to go.

It’s nice to see a variety of different flavors. We only wish there was a burger or sandwich to add them to! All of the sauces below are not only vegan-friendly, but also gluten-free. Wheee!

We’ve heard that Arby’s is pretty stingy when serving up the vegetables, but don’t be intimidated by that. We always follow the rule that friendliness comes first and it usually works! Ask respectfully, but firmly for a variety of extra veggies.

It’s kind of exciting to come across a fast food restaurant that offers an option for a sweet, after-meal (we use the term loosely here) snack. You have two flavors of accidentally vegan turnovers to choose from and two apple options, which actually all sound pretty darn delish!

The usual line up is listed here. It’s nice to see a few fun flavors of lemonade and juice for a change. One day, they may offer delicious dairy-free shakes, too. Cross your fingers, friends!

Depending on your location (especially based on the country you live in), there are several more smaller menu items to choose from. Not much to make out of them, but we wanted to share them, just in case. They include:

Does Arby’s Have a Kids Meal With Vegan Options?

They do have kids’ meals, but they’re not at all accessible to vegan kids. No plant-based burgers or nuggets here. Little ones will be very disappointed with only fries, applesauce, and a beverage. A small snack if you’re on-the-go and duly desperate, but not a good reason to visit otherwise.

Vegan and Gluten-Free At Arby’s

Thankfully, Arby’s has a specific gluten-free menu for anyone sensitive to wheat, barley, rye, or oats. It’s disappointing to see the list is so short, but at least we know what’s what. Vegan-friendly, gluten-free options that are safe to order include:

They are! Although they do list wheat as an ingredient (so they are not gluten-free), they are vegan-friendly. Keep in mind that Arby’s cooks their fries in the same oil as other animal-based foods. It’s a personal choice whether or not you feel comfortable with that.

Yes! Arby’s curly fries are made with vegan ingredients and they are not fried in any animal fat. But they are cooked in the same oil as other animal products, which is a concern for some vegetarians and vegans.

Does Arby’s have salads?

Yes, they do offer a small side salad on the menu, but make sure to order it without cheese and choose a non-dairy dressing to go with it. The Light Italian or Balsamic Vinaigrette are good options.

What are Arby’s vegetarian options?

There are usually always more Arby’s vegetarian options compared to vegan options at Arby’s. Menu items that contain dairy (such as cheese and milk) are open to vegetarians.

How to Use the Arby’s Allergen Menu

Check out the Arby’s Allergen Menu and Nutrition Information page to make sure that you are purchasing a vegan-friendly item. The menu items offered at Arby’s don’t seem to change very often, but you may want to double check before you visit.

NOT Vegan at Arby’s

Besides the used animal-based burgers, sandwiches filled with suffering, and noxious nuggets, here is a list of more food items that are not on the vegan menu. Boo!

Make Your Own At-Home Vegan Burger and Fries

If you’re not able to bear any burger-and-fries franchises in your neighborhood, take time to grill up a few glorious vegan burgers in your very own kitchen. These recipes are not only quick to make, but they’re quite tasty, too! Find the best veggie burger and fantastic fries recipes here:

Don’t forget the salads! If you’re stuck for scrumptious salad ideas, no worries! Our go-to guide for making the best vegan salad is here for you. Chock full of both sweet and savory salad suggestions and several delicious dressing recipes to boot. Give them a try!

Although Arby’s has not yet included any plant-based burger or protein options to their menu, we can still hope that our heartfelt vegan requests will be heard. Since there are more and more vegan-friendly burger on the fast food front, we have high hopes that Arby’s will soon come up with at least one savory sandwich choice and scrumptious dairy-free shakes to devour. Wouldn’t it be amazing if they agreed to have a fully vegan area on their menu?  In the meantime, we can always write to, call, or contact the managers of any location to make our requests.

Have you found any other vegan options at Arby’s? Did you find something amazing that we missed? Let us know by tagging #worldofvegan and sharing your favorite vegan-at-arbys creations with all of us!

How To Order Vegan Burgers and Fries at Other Fast Food Chains:

This article is not sponsored and we are in no way affiliated with Arby’s. At the time of this article, the menu items mentioned above are vegan. Since restaurants constantly update their menus and add or take away items, please keep this in mind when ordering your food. There may be new Arbys vegan options that are not listed or items listed here as vegan, which are no longer vegan. Take care to double-check.

This Arbys vegan options guide was written by Gina House and edited by Michelle Cehn. Please note that this article may contain affiliate links which means shopping through them really helps to support World of Vegan!