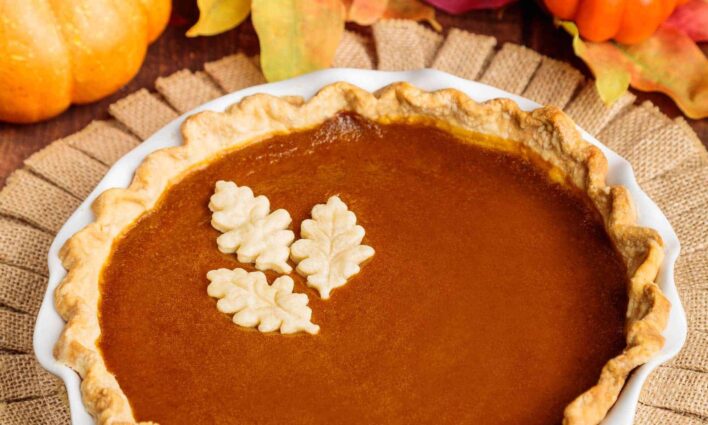 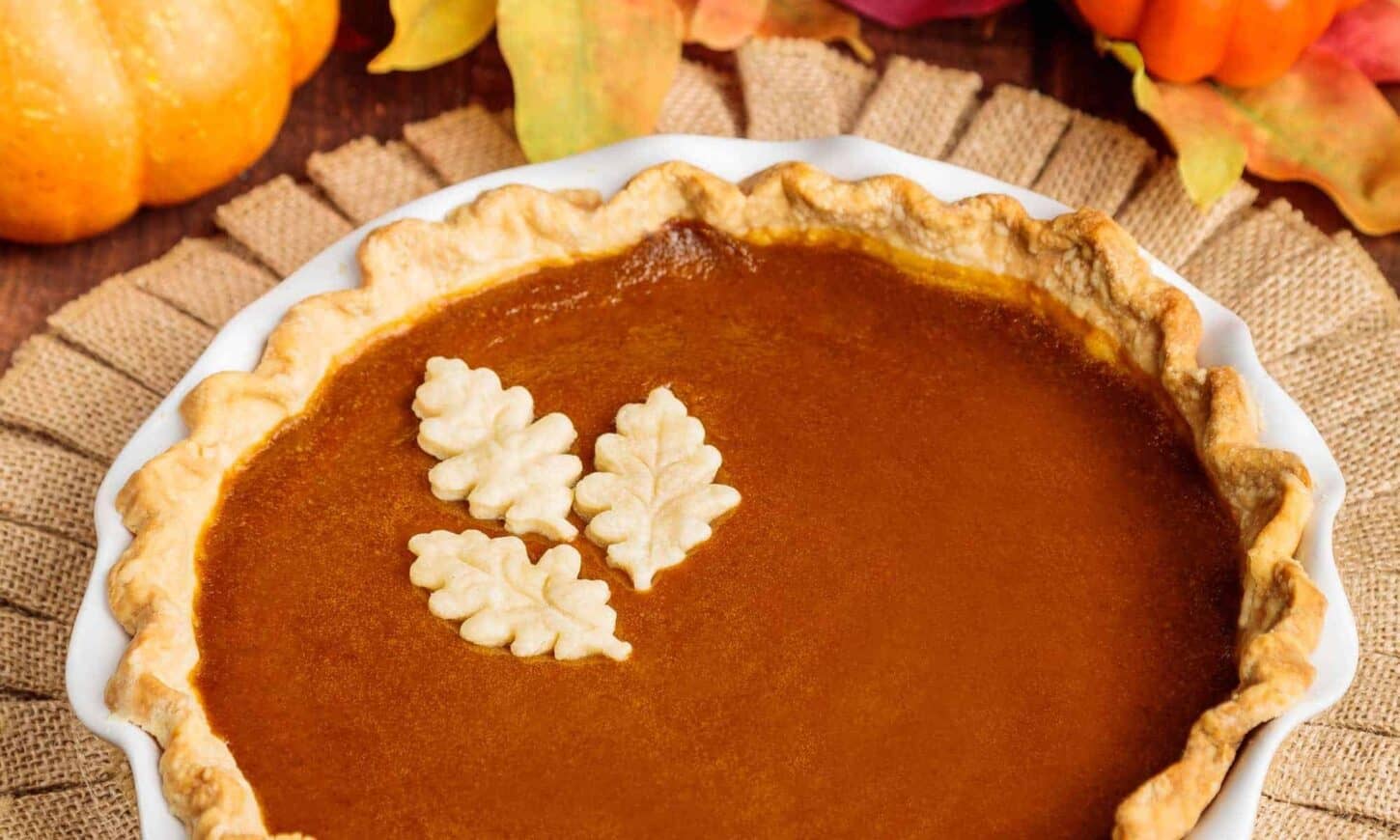 Pumpkin Pie
This post may contain affiliate links, which means that I make a small commission off items you purchase at no additional cost to you. Please read my policy page.

No vegan Thanksgiving dinner would be complete without a pumpkin pie on the menu. Over 50 million slices are served on this day alone, to say nothing of the winter holidays that follow. Countless variations exist but at the end of the day, it’s hard to beat this classic easy vegan pumpkin pie recipe. Rich, creamy pumpkin custard with warm spices sparkling in every bite, no one can resist going in for seconds.

This delightfully dairy-free pumpkin pie recipe comes from the fantastic cookbook Vegan Thanksgiving Dinner and Pies by Audrey Dunham. This book can become your go-to resource for preparing the ultimate fall harvest feast. From starters to stuffing, roasts to desserts, you’ll get the tools to make a meal everyone will truly be thankful for.

Why You’ll Be Pie-Eyed for This Vegan Pumpkin Pie

How to Top Your Pumpkin Pie

Great pumpkin pie needs little more than a fork to enjoy, but a few extra flourishes can really take it to the next level.

A Brief History of Pumpkin Pie

Did you know that pumpkin pie wasn’t actually a guest at the very first Thanksgiving? Native Americans living in the northeast had been growing pumpkins for hundreds of years, which they gave to the pilgrims as gifts. Initially, the pilgrims may have enjoyed the winter squash stewed with milk, honey, and spices, but there was certainly no pastry involved.

The earliest known record of the pumpkin pie as we (more or less) know it showed up in in the early 1600’s. Le Vrai Cuisinier Francois (The True French Cook) by Francois Pierre la Varenne included a recipe for “Tourte of Pumpkin” baked on a “sheet of paste,” which we can assume would be a pastry dough in common parlance.

From there, the idea caught on like wildfire. “Pumpion pie” began to appear in English cookbooks, sounding more like the familiar flavors we enjoy today, including spices such as cinnamon, nutmeg, and cloves. It wasn’t just a smooth custard though. The recipes frequently added apples, raisins, or currants to the filling.

Pumpkin pie as we know it finally hit America in 1796, as published in American Cookery by an American Orphan Amelia Simmons. We know a good thing when we taste it; the formula and flavors haven’t changed much since then! 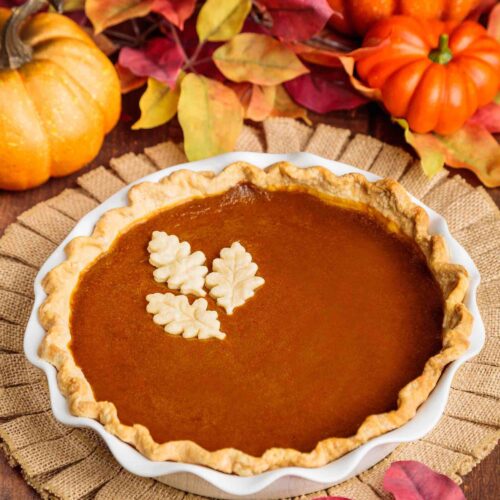 BEST GLUTEN FREE VERSION: Use a vegan gluten-free pie crust and check the labels on all remaining ingredients to ensure they’re gluten-free as well. MAKE-AHEAD TIP: The pie is best if made 1 day before you plan to serve it and will stay fresh in the refrigerator for up to one week.
Course Dessert
Cuisine American
Keyword dairy-free, dessert, gluten free, holiday, pie, pumpkin, thanksgiving, vegan

About the Recipe Author

Audrey Dunham is a vegan recipe creator who shares quick and easy recipes on her website as well as on her YouTube channel. She’s also the founder and creator of Peanut’s Bake Shop, decadent vegan and gluten-free cookie mixes. With an equal love of food and passion for being physically fit, her goal is to help others learn how to easily prepare crave-worthy, healthy vegan meals that the whole family will enjoy.

This easy vegan pumpkin pie recipe is from the Vegan Thanksgiving Dinner and Pies: All of Your Thanksgiving Dinner and Dessert Classics Made Vegan! cookbook by Audrey Dunham. Pumpkin pie photos by Vanessa Stump. Published by Audrey Dunham Celebrations. Article written with support from Hannah Kaminsky and Amanda Meth. Please note that this article may contain affiliate links which supports our work at World of Vegan.