Vegan at Five Guys — How To Order Vegetarian & Your Options & Fries

share this post
This vegan fast food guide outlines everything you can order on the Five Guys menu that's vegan. All of the food listed is also vegetarian, plant-based, and dairy-free! 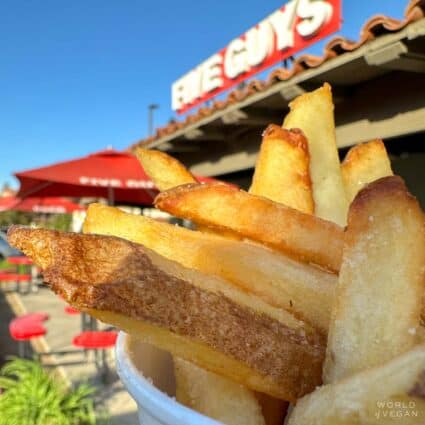 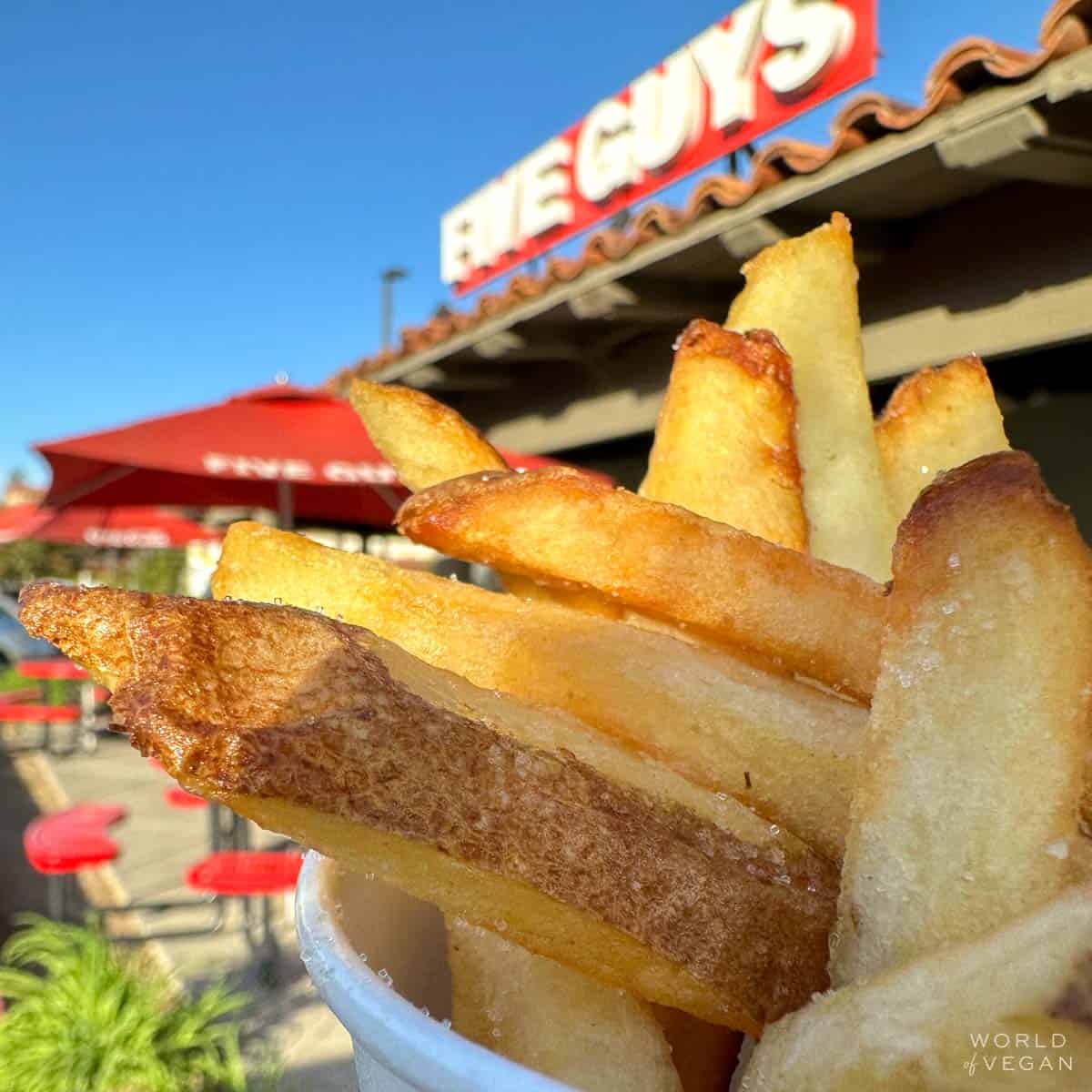 What’s vegan at Five Guys? Do they offer a plant-based burger or vegan-friendly fries for the animal-free eaters that are on the rise? It may come as no surprise that they have a pretty scanty selections of vegetarian and vegan menu options for vegans.

So, what can you get at this family-owned, fast food grill? Are there any safe options in sight? Do you need to arrive with your hunger already assuaged? Fear not, vegan friends, this guide is here to fill in the facts.

It Sucks, But Your Only Real Options Are Fries, Peanuts, and Soda.

We hope you like fries, because there’s not much else on the menu for vegans.

We’ll take you step-by-step through any and all menu items offered at Five Guys Burger and Fries. If you’ve always wondered what you could nosh or nibble on at this rowdy restaurant, keep reading. It’s up to you to decide if it’s a ‘yay,’ ‘nay,’ or may-be-worth-trying.

Both flavors of Five Guys fries are made with 100% peanut oil. You can choose from the Five Guys Style or Cajun Style fries. Both are vegan-friendly. Yay!

Here’s what the company says about their fries:

How to Navigate the Menu at Five Guys

Lucky (or unlucky!) for us, the menu at Five Guys is pretty straightforward. They offer burgers, hot dogs, grilled cheese, fries, and milkshakes. Because there is only one main menu item that is vegan-friendly, there isn’t much to consider.

Here’s what we suggest:

NOTE: If you know that you’ll be visiting Five Guys ahead of time, you can also bring your own plant-based bun (for the veggies) and your own vegan dessert, like a homemade vegan cookie or super fudgy brownie.

Does Five Guys Offer Any Vegetables?

They do, but all of the cooked vegetables are grilled on the same cooktop as the burgers and hot dogs. The cooks wipe off the grill after each order, but they don’t have a separate non-meat grilling area. So, it’s a personal decision and totally up to you.

Another option would be to add fresh veggies to a lettuce “bun”. Not too exciting, but it might be a tad more filling (and more nutritious) than just a side of fries.

Is the Veggie Burger Vegan at Five Guys?

Nope. The Five Guys veggie sandwich (not burger), is basically a bun filled with grilled vegetables.

Since we already know that the grilled veggies are cooked alongside animal foods, that might be out of the question for some of you already. But, the bun itself is not even vegan, only vegetarian. Sadly, the Five Guys regular bun has both eggs and dairy in the ingredients, so it’s a no-go.

It’s really sad that there are multiple options for sauces and condiments at Five Guys, but no vegan burger to add them to! What’s up with that, Five Guys? We’re keeping our hopes up for a Beyond Meat or Impossible Burger option!

What Other Vegan Options Are There at Five Guys?

Peanuts! As long as you don’t have a peanut allergy, this high-fiber, whole-food appetizer is incredibly appealing. They’re not on the menu, but anyone coming into the restaurant can take a cardboard carton and fill it up.

It’s actually pretty fun shelling them yourself. At least there’s one food you can feast upon other than french fries.

Whats about drinks? Five Guys offers Coca-Cola products at all of their locations.

NOT Vegan at Five Guys

Besides the very obvious animal-based burgers and hot dogs, there a couple of things that you might think could be plant-based.

NOTE: If you are a vegetarian eating at Five Guys, there are a number of menu items for you to choose from such as the grilled cheese, the veggie sandwich, and the cheese veggie sandwich.

Although it may be a miracle for Five Guys to offer a plant-based burger or vegan grilled cheese, but if Burger King gave it a go, anything is possible! There’s nothing stopping this popular fry franchise from featuring a veggie option to for us to feast upon. In the meantime, we can always write to, call, or contact the managers of any location to make our requests.

We have a ton of super helpful vegan restaurant guides and vegan fast food guides to help you find the best eat-in or take-out options at each location. If you’re in need of a quick vegan meal on a road, give our guides a gander. There’s everything from pizza to pasta and burgers to burritos, plus other favorites to fall back on.

Have you found any other options to be veganizable? Did you find something amazing that we missed? Let us know by tagging #worldofvegan and sharing your favorite vegan-at-Five-Guys creations with all of us!

This article is not sponsored and we are in no way affiliated with Five Guys. At the time of this article, the foods mentioned above are vegan. Since restaurants constantly update their menus and add or take away items, please keep this in mind when ordering your food. There may be new items that are vegan at Five Guys and not listed or items listed here as vegan, which are no longer vegan. Take care to double-check.