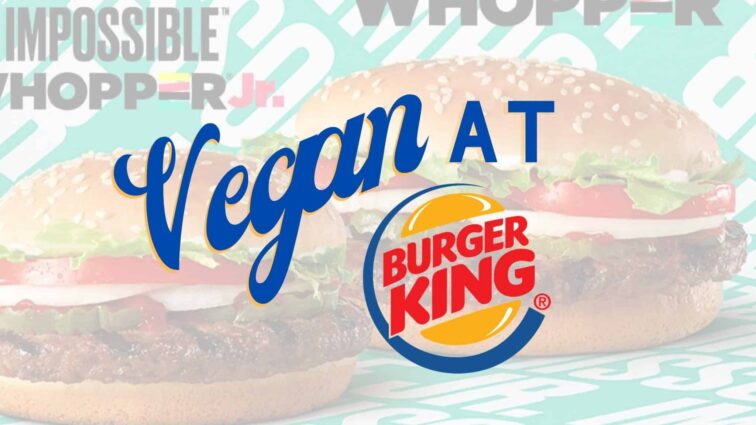 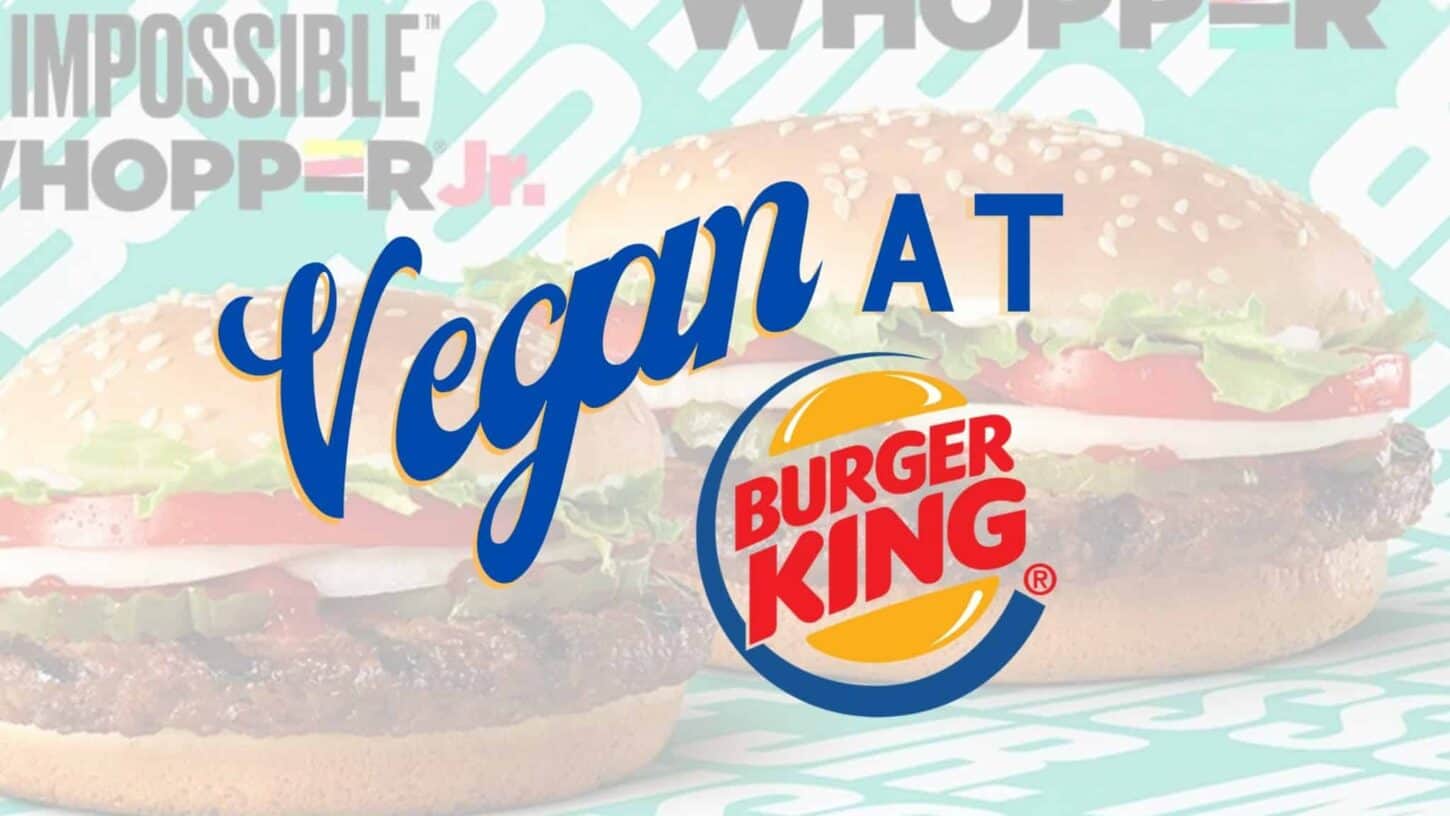 For 50 years, Burger King has been in the business of burgers. After many decades of listening to mainly meat media, they’ve decided to take part in the plant-based territory. Burger King made history when they launched the Impossible Whopper in 2019—a massive step when you consider that Burger King has more than 17,000 locations and serves over 15 million customers per day. That’s billions of burgers every year.

At least we now have one option for burgers on-the-go across the country—and hopefully, we’ll see even more vegan options in the near future. In fact, check our our vegan fast food guide to see what other options are currently available to you at chain restaurants!

And now, if you’re wondering what you can eat that’s vegan at Burger King, read on.

Just note, the vegan whopper is made on the same grill as other meat products, so if this bothers you, it may not be suitable for you. Remember that it has zero impact on animals if it’s cooked on a separate grill, or a shared grill, so this is a personal preference, not an ethical consideration.

Yes! Burger King uses vegetable oil for frying their french fries, so the Burger King fries are vegan! However, they do share a fryer with other non-vegan foods, so if you’re worried about cross-contamination, then skip the fries. Ethically speaking, sharing a fryer with other non-vegan products doesn’t actually impact animals or cause any addition suffering, so ethically speaking, you should be in the clear.

Vegan Breakfast Options (available until 10:30 am)

Breakfast is pretty much the best time to buy at Burger King. You can stuff your belly full of French Toast Sticks (accidentally vegan—woo!), heaps of hash browns and throw in an additional order of oatmeal (made with water). Combine with an ice-cold OJ and you’ve got yourself a very vegan breakfast buffet!

Vegan Lunch & Dinner Options at Burger King (available after 10:30 am)

For lunch and dinner you can turn to the Impossible Whopper, made vegan by holding the mayo. The Impossible Whopper is surprisingly meat-like and has gotten rave reviews. It can be brilliantly bulked up with a substantial side of fries (they use vegetable oil for frying) or an admittedly sad garden side salad (with no cheese or dressing). Invest in the vegan Whopper on your visit and you can discover what all the hype is all about. Encourage the person with you to try a bite too (bonus points if you record their reaction).

Note: they used to offer a vegan PB&J Jamwich for kids, but those seem to have been removed from the menu.

Sadly, Burger King discontinued their only accidentally vegan dessert—the apple pie. It’s no longer sold nationwide, and long-time fans of this sweet hand-held treat are crushed. They have shakes, and soft serve, and cookies, and a Hershey’s Sundae Pie—but sadly none of those are vegan.

Beverages are a quick and simple ordering option, keeping in mind that all of the shakes, soft serve, and sundaes are mostly made with milk. The ICEEs are surprisingly vegan (with only ice and sugar syrup as the main ingredients) if you are searching for a cold, sweet treat. The beverages below are all vegan-friendly.

How Long is Breakfast Served at Burger King?

Burger King breakfast is only served until 10:30 a.m.—so don’t expect to add hash browns or french toast sticks to your order when you’re visiting in the afternoon or for dinner. Most locations open at 6 a.m., but some operate 24-hours a day.

Are the Burger King Buns Vegan?

Yes, the hamburger buns at Burger King are vegan! They are made without any dairy or eggs, so you can absolutely enjoy them with the Burger King veggie burger.

What’s NOT Vegan at Burger King?

The onion rings at Burger King are sadly not vegan — they are made with whey (a milk derivative). Also, if you were hoping for a warm breakfast biscuit, puffy pancake, or a fine, flaky croissant, you will be decidedly disappointed. All are made with milk and/or butter with no savory substitute.

Plea for the Onion Ring

Without all that dreaded whey
You don’t need it anyway

We would buy them day or night
To a vegan, it’s our right

To have a crunchy, savory treat
Without the dairy or the meat!

If you’re concerned about the high-fat content (coconut and sunflower oil) or soy base of the Impossible Whopper, consider ordering a Whopper Junior with no meat or mayo. Yes, it’s just a bun with lettuce and tomato, but you could also heap some heavenly hash browns in the center accented with a hit of hot sauce.

Although there isn’t a large variety on the main menu of this huge hamburger chain, there seems to be a promise of more plant-based options in the future. As always, the more often we ask, the more these ruling restaurants will become aware of the increasing need for non-meat options.

We hope that Burger King’s “Be Your Way” slogan will spread its branches beyond just the individual Impossible Burger.

Are the croissants vegan at Burger King?

No, the croissants sadly aren’t vegan. They’re loaded with butter and dairy.

Are the buns vegan at Burger King?

Yes! The buns are vegan, plant-based, dairy-free, and egg-free. So load those buns up with an Impossible veggie burger and the plant-based fixin’s (minus the mayo) and enjoy!

What’s the Plant-Based Whopper Made From (Ingredients)?

How to Order at Other Chains

Have you found any other options to be veganizable? Did you find something amazing that we missed? Send us a message and let us know and tag #worldofvegan and @vegan on Instagram to share your favorite vegan at Burger King creations with all of us!

Disclaimer: At the time of this vegan and vegetarian Burger King article (last updated in 2022), all of the foods mentioned above are vegan. Since restaurants constantly update their menus, add or take away items, and reformulate menu items, please keep this in mind when ordering your food. There may be new items that are vegan and not listed above or items listed here as vegan, which are no longer vegan. Take care to double-check. Good luck!