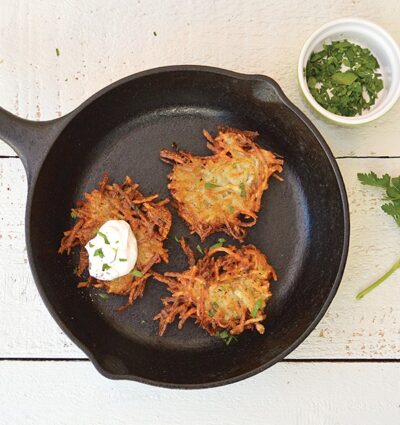 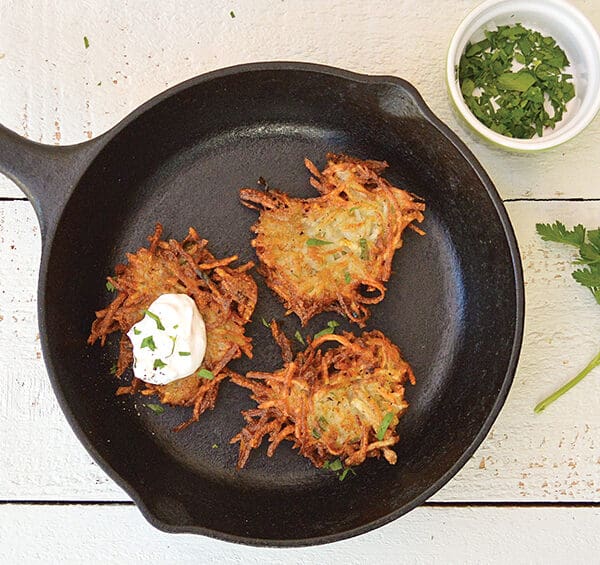 Is there anything better than fried potatoes? These potato pancakes are similar to traditional latkes, but they’re made using aquafaba (chickpea brine) instead of egg! This vegan potato pancake recipe is egg-free, vegetarian, plant-based, dairy-free, and totally delicious.

This recipe comes from Zsu Dever, who hails from a long line of culinary professionals and restaurateurs. The author of Vegan Bowls and Everyday Vegan Eats, she’s the publisher of Zsu’s Vegan Pantry blog. She’s a food writer and photographer who has taught cooking workshops. Enjoy!

How to Serve Up This Vegan Potato Pancake Recipe

Whether you’re serving these latkes during the holidays or simply enjoy the comfort of fried potato pancakes, there are plenty of amazing vegan dishes to have right along side your lovely latkes.

Have a Hanukkah Feast

If you’re preparing these aquafaba latkes for Hanukkah and need some ideas for what to serve alongside them, check out our Ate Nights of Vegan Hanukkah Recipes!

Want to prepare your vegan latke recipe for Passover and want some tips on how to make the most of it? Fear not, dear reader! Our Vegan Passover Guide is filled with plenty of suggestions for having a pleasant vegan Passover.

Who said your vegan latke recipe specifically had to be reserved for dinner? Make a delicious lunch with our Vegan BLT Sandwich With Homemade Eggplant Bacon! Craving a wrap instead? Get lavish with these Rainbow Lavash Wraps or keep it a little raw with our Rainbow Collard Wraps.

Bring on the Burgers

Latkes go perfectly with a good burger! In the mood for bbq? Try our Barbecue Black Bean Burgers & Homemade BBQ Sauce. More of a red bean type of person? We’ve got you covered with these Quick & Easy Red Bean Burgers. Like your burgers to taste like pizza? Then you can’t miss our Vegan Pizza Burgers.

Get a Little Green

If you’re looking to balance your luscious latkes with some greenery, then take a gander at our How to Make A Vegan Superhero Salad guide or Spicy Sesame Sautéed Kale.

So you’ve found yourself with more latkes than you can handle after making this delicious vegan latke recipe. You can keep them in the refrigerator for up to two days or freeze them for up to two weeks. Either way, it’s a good idea to store them in a closed container between some paper towels so they don’t get too soft. Once you’re ready to heat them up, stick them in the oven at 350º until they’re crisp again.

5 from 5 votes
These vegan potato pancakes (aka latkes) are perfectly crisp on the outside and melt-in-your-mouth on the inside. The added potato starch increases their crispiness, but it is not essential. Some russet potatoes tend to be on the drier side, but to be safe, place them in a lint-free kitchen towel, fold up the edges and give them a good wring to remove excess water. Serve this the traditional way, with nondairy sour cream and applesauce. 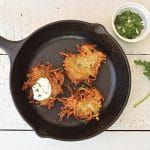 Interview With the Recipe Author

We had a chance to talk with Zsu about her latest book, Aquafaba. After the interview, we hope you enjoy making her delicious and easy vegan latke recipe!

Aquafaba has rocked the world of vegan cooking. In your book, you described your first foray into using aquafaba. Can you briefly share that experience with our readers?

ZD: The experience of draining a can of beans and adding this same liquid to the bowl of a stand mixer represents what I had been taught all my life regarding the discarding of the cooking water of beans. Until then I had, along with most other people, drained my beans, dumping the water down the sink, and rinsed my beans thoroughly before using. Now I found myself adding this amber liquid to my stand mixer and wondered what to expect next. I began to whip it and after about 2 minutes the liquid was beginning to expand, becoming aerated and changing color. After about 8 minutes, the liquid was becoming pure white and had filled half my bowl. I was stunned. And I must say that I am continually amazed each and every time I make meringue. It is such an awe-inspiring experience, watching this happen—and it does! Unless I make the mistake of adding oil to the bowl at some point before the meringue is at stiff peaks, the golden colored liquid metamorphoses into fluffy, pure white, clouds of meringue.

There are surprisingly many applications for using aquafaba. What’s one of your favorites (besides this vegan potato pancake recipe)?

ZD: That is very tough to answer! There are indeed so many applications – from making meringue cookies and Madeleine cakes to quiches and vegan meatloaf, aquafaba has a whole slew of wonderful uses that create amazing dishes. My favorite, however, is making vegan butter.

Vegan butter was originally reverse-engineered by Mattie Hagedorn, of veganbaking.net, back in 2011, and it is such an easy recipe to make using aquafaba that I find myself making it weekly. It tastes awesome and I can personally control the density of the butter. Mattie did us a huge favor back in 2011 and aquafaba is making it even easier to make vegan butter since 2015.

What would you consider the best gateway recipe for novices in the kitchen?

All in all, though, the fact that you can whip aquafaba into meringue, add sugar and vanilla and bake it until crisp, and, most importantly, taste and enjoy an egg-free meringue cookie, is an experience we should all have as aquafaba newbies.

In Aquafaba, you share some tips and tricks. Can you issue a tip or two here for those new to using aquafaba?

When making meringue, it is important to reduce your canned aquafaba by ⅓. Canning companies tend to have about the same ratio of water to beans across the board and by simmering the liquid until it is reduced by ⅓, you are ensuring that the chilled aquafaba (chill before use) will be strong enough to whip into a stable meringue. Once chilled, aquafaba should gel somewhat.

At this point it is ready to whip into meringue or use in any recipe that calls for straight aquafaba. In addition, it is best to use a stand mixer for the whipping, but an electric hand mixer can suffice. It does take a long time (around 10 to 25 minutes) to whip aquafaba into meringue, so a stand mixer is the best option. Make sure your bowl is impeccably clean (don’t use plastic bowls because they trap grease and fat will prevent the aquafaba from whipping).

Follow a recipe when using aquafaba to make cookies (check out my book or the Facebook group Aquafaba—formerly Vegan Meringue (Hits and Misses) for a recipe). Pipe your meringue only onto parchment paper or silicone mats. Wax paper or straight onto a baking pan will cause the meringue to deflate. Once whipped, meringue will last a few hours before completely deflating. Bake only on very low temperature, around 200 degrees F. Anything hotter and the meringue will deflate. My book has more tips and tricks for a successful aquafaba experience.

You’re so generously sharing your aquafaba latke recipe with our readers, which looks amazing by the way. From where do you draw inspiration when you’re creating recipes?

For this book, my inspiration was the hens. I wrote this book with them in mind. Hens are the most cruelly treated farm animals and anything I can do to reduce egg consumption can only be a benefit to them. The egg industry, like all industries, relies on supply and demand—if eggs are not in demand, supply will diminish. That is my goal. And for that goal to become real, eggs need to become less and less in demand.

Aquafaba is a wonderful beginning to that end. I create recipes based on a few things, one being the animals and a second being classic recipes that have become so traditionally ingrained in our society that they have become fabric of ourselves. Replacing animal ingredients such as eggs, but keeping the integrity of the recipe itself, helps us leave eggs behind in favor of a more compassionate and ethical mealtime.

Vegan Latke Recipe shared with permission from Aquafaba, © 2016 by Zsu Dever. Article written by Kristie Middleton and edited by Amanda Meth. Please note that this article may contain affiliate links which supports our work at World of Vegan.