share this post
Welcome to Eight Ate Nights of Veganukkah! Here you will find a hearty helping of comforting and classic vegan Hanukkah recipes in celebration of the Jewish Festival of Lights. 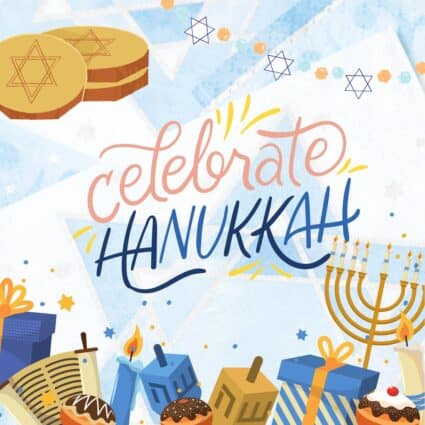 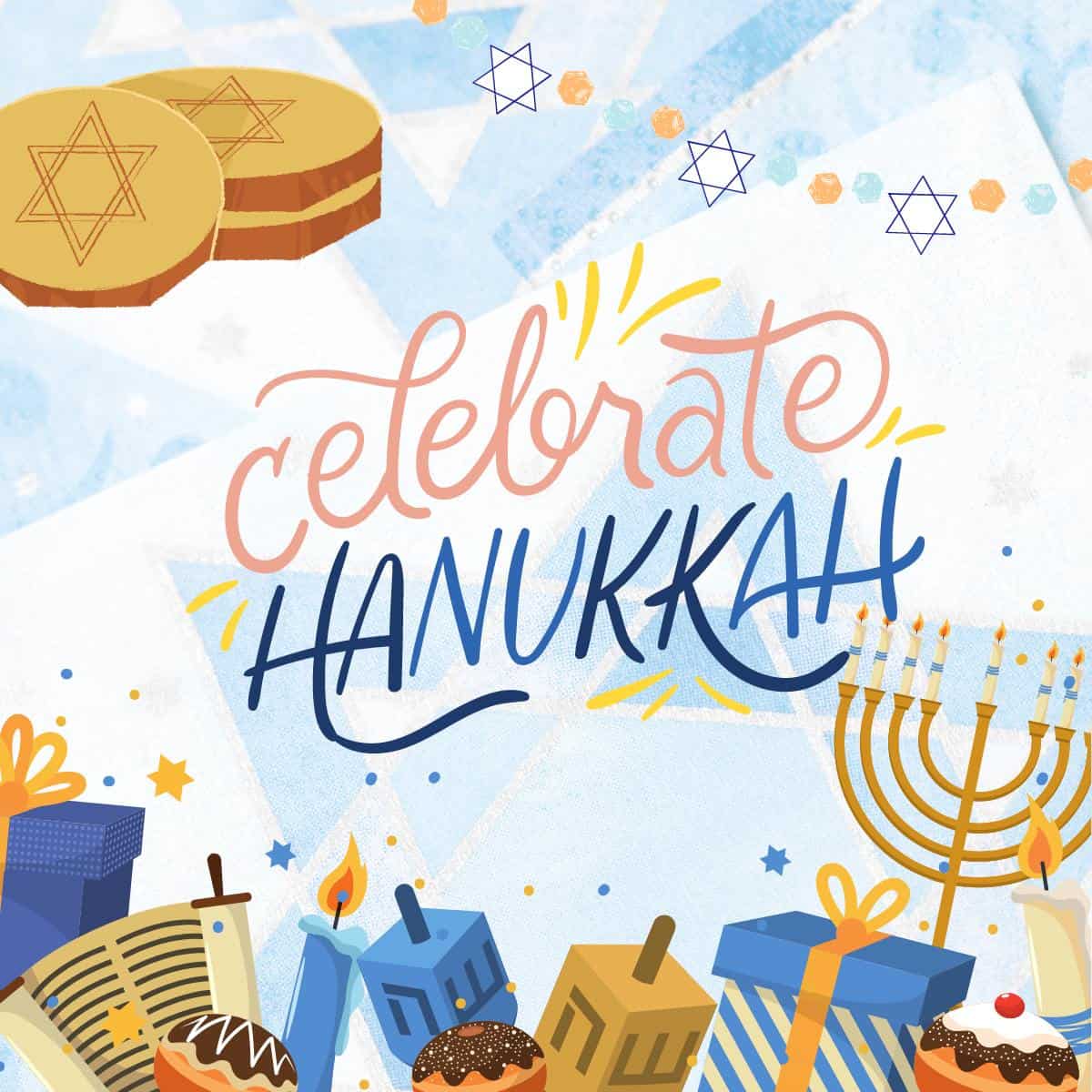 Hanukkah is a joyous holiday commemorating the resistance of the Jews against the Maccabees and the miracle of a small jar of oil that supposedly lasted for eight whole days. While it’s actually considered to be a minor Jewish holiday, it has become a highlight of Jewish culture over the past century and is celebrated with an array of delicious, decadent dishes.

So get your vegan Hanukkah candles lit and your stovetop warm—it’s about to get chozy in here.

No Hanukkah celebration would be complete without candles, a dreidel and some chocolate gelt! But wait—most gelt isn’t vegan.

For the first night of Hanukkah, let’s spark things off with some grate golden potato latkes! How could you say “no” to such perfect pancakes? Easy to make and simple to modify, latkes are a Jewish staple and a great way to draw your loved ones to the table.

Did you know the earliest versions of latkes were made from curd cheese? Potatoes weren’t introduced to Europe until the late 16th century but once they were, they became wildly popular due to their affordability. While you’re welcome to try your hand at a vegan cheese latke, we’re sticking with this classic potato version with a carmelized onion dip here at World of Vegan.

And here’s another version of vegan latkes made with aquafaba!

The second night of the Festival of Lights calls for a warm bowl of our Vegan Matzo Ball Soup! A delectable dish heavy with fall flavors, this matzo ball soup will keep you cozy as you spin the dreidel with your loved ones and watch the menorah flicker from the window.

Commonly consumed during Passover, this soup is also a perfect vegan Hanukkah recipe, especially since the holiday takes place during a colder part of the year. Be sure to allow yourself an extra day to prep this dish since the matzo ball dough needs to set overnight!

Noodle Kugel was one of my absolute favorite dishes to eat as a kid. Growing up, I loved my mom’s noodle kugel but it was far from vegan—featuring a mixture of cottage cheese, sour cream, butter, and eggs. So, on our seventh night of Hanukkah, I am thrilled to share this insanely delicious vegan noodle kugel recipe, which already has me so hungry.

To make this dairy-free, we turn to vegan cream cheese, vegan yogurt, vegan butter, and silken tofu. This Noodle kugel comes together easily and is a great family meal. But if you’re making this for just yourself, it’s perfect for eating throughout the week!

A round-up of vegan Hanukkah recipes wouldn’t be complete without sufganiyot (pillowy jelly-filled donuts). Since we’d like to end the Festival of Lights with something sweet, we’re leaving you with THREE versions of vegan sufganiyot for the fourth night of Hanukkah.

First up we have the classic vegan jelly donut sufganiyot! If you’re looking to impress your friends and family and want an excuse to throw on your favorite apron, then this recipe is for you.

Not only can you “wow” them with some delicious treats but you can spew cool facts like how these donuts came about after an Israeli trade union called “Histradut” figured out a creative and delicious way to put new Jewish immigrants to work. Lucky us!

Now if deep frying donuts seems like a little too advanced for you in the kitchen, try our super-easy baked vegan chocolate donuts instead! No need to mess with oil or donut dough, just whip up a quick cake-style batter, dollop it into silicone donut molds, and bake them up to perfection!

If you’re not into doughnuts or just want to try something different, may we suggest these jelly donut cupcakes? Crafted by none other than Jewish vegan chef Isa Chandra Moskowitz and Terry Hope Romero, this delicious vegan Hanukkah dessert requires zero frying or kneading but will deliver just as much flavor as a traditional donut. Make sure you still have some gelt or rugelach on hand since these cupcakes need to set overnight!

Alright, we’re halfway through the holiday and you’re looking for a slight break in the kitchen. Not only is this Fresh Israeli Couscous Salad a fresh addition to your Hanukkah menu but it’s pretty darn easy to make!

Also known in Hebrew as ptimim, couscous came about in Israel during the 1950’s when rice was scarce. Eugen Proper, a founder of the Osem food company, was asked to devise a wheat-based substitute and couscous was born!

This salad features a variety of fresh veggies and even a simple recipe for vinaigrette. Perfect alongside your brisket, latkes, and matzo ball soup—this salad is too good to pass up!

Grab your Star of David cookie cutters, and maybe some dreidel and menorah shaped cookie cutters too! These basic vegan sugar cookies will be a perfect family-friendly activity for the sixth night. Decorating is the most fun part, so be sure to whip up a batch of this perfected vegan royal icing too!

It’s the seventh night of Hanukkah, you’re raking in all the gelt during dreidel, and you’re having a grand ol’ time. But there’s just one thing you can’t shake off your mind—the nostalgia of a challah. Well, we have just the recipe to meet your kneads by Domestic Gothess.

If you’re intimidated by the prospect of baking a beautiful, braided loaf, fear not, dear reader! This recipe is absolutely gorgeous and features some super easy-to-follow steps. Y-U-M! We’d just advise that you give yourself an extra day for the best results.

Did you know the word “challah” originally meant only the small portion of dough that was put in the oven as a reminder of the destruction of the Temple in Jerusalem? We’re sure glad it’s evolved beyond a little ball of dough and has made its way to kitchens around the world.

Night seven calls for something sweet with vegan rugelach! Pronounced “roo-guh-laak,” this delicious dessert resembles a crescent roll with a dense yet soft texture. Rugelach originated in Poland and are traditionally filled with a variety of ingredients.

This recipe by Rainbow Nourishments is for chocolate lovers but you could also fill your rugelach with raisins, vegan cream cheese, nuts, or jams instead! What could make this dish even more delectable, you ask? Why, serving these treats alongside a glass of fresh almond milk, of course! Mmmmmm.

We hope you’ve enjoyed our Ate Nights of Veganukkah and are able to give these vegan Hanukkah recipes a try. Be sure to check our How to Celebrate a Vegan Hanukkah for additional tips. We wish you a safe and joyful holiday with your loved ones! Happy Veganukkah!

Need some Hanukkah present ideas for your loved ones? Check out our vegan gift guide that includes more than 100 compassionate and useful ideas for everyone in your family. From vegan cookbooks to vegan subscription boxes, fun kitchen essentials to homemade vegan gift baskets, our gift guide will help you spoil your loved ones in a compassionate way.