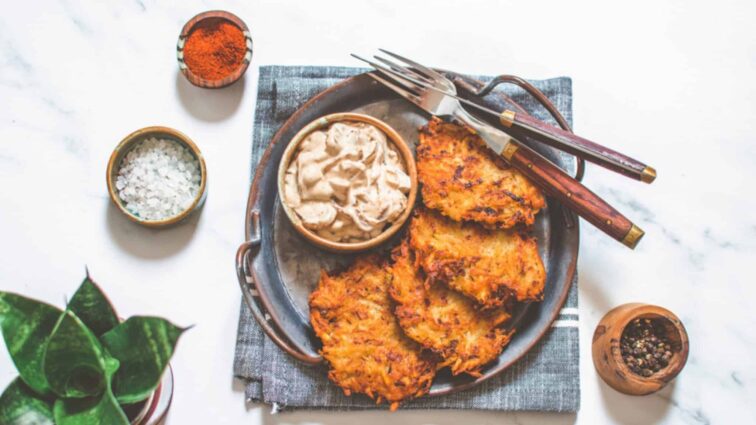 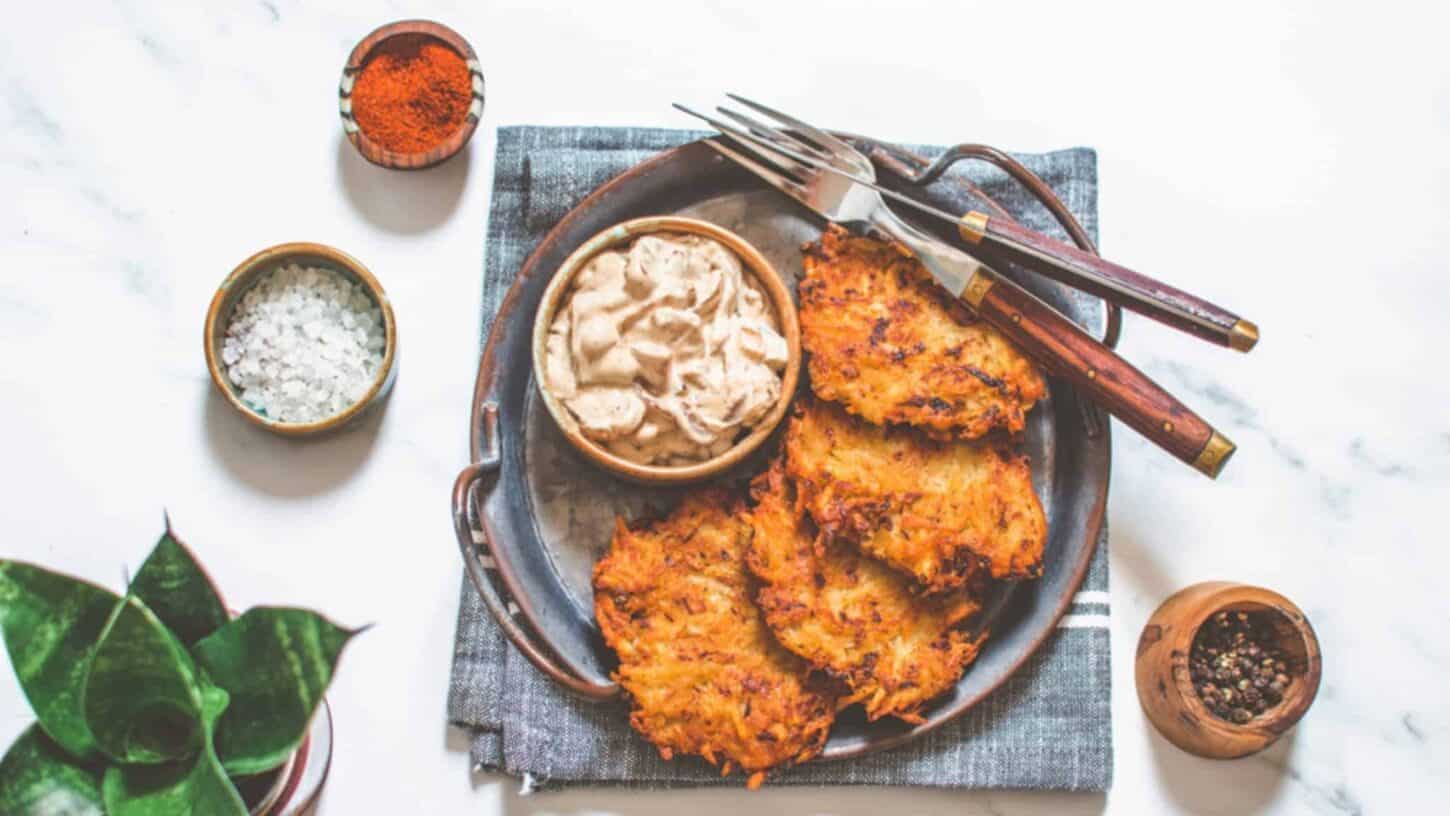 Lover of vegan latkes? We don’t blame you! These scrumptious shredded potato patties are seriously addictive. Super crisp and fried to perfection, these glorious bites are gobbled up as soon as they’re out of the frying pan.

The caramelized onion dip is the icing on the potato pancake. This creamy concoction has just the right balance of sweet, sour, and savory. It’s best made the night before so that the flavors can meld and marinate together. Totally worth your time, though!

If you were ever intimidated by attempting such a recipe, fear no more! With just 5 simple ingredients and a little bit of oil, you’ll have luscious vegan latkes on your plate in less than 10 minutes. We give you permission to be selfish, in case you don’t want to share.

5 from 9 votes
Get ready to veganize your Hanukkah celebrations this year with these delicious vegan latkes! Your family and friends will absolutely love them! 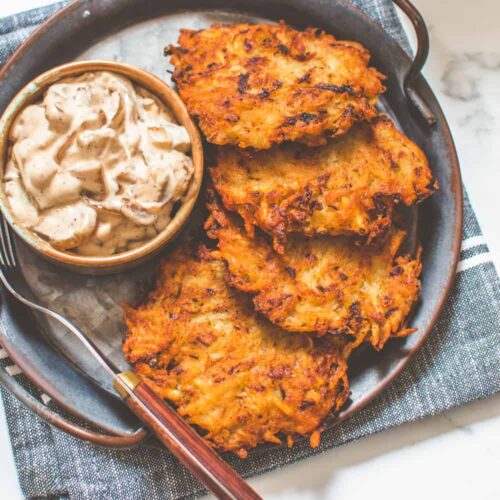 For the potato latkes

For the caramelized onion dip

To prepare the potato latkes

To prepare the caramelized onion dip 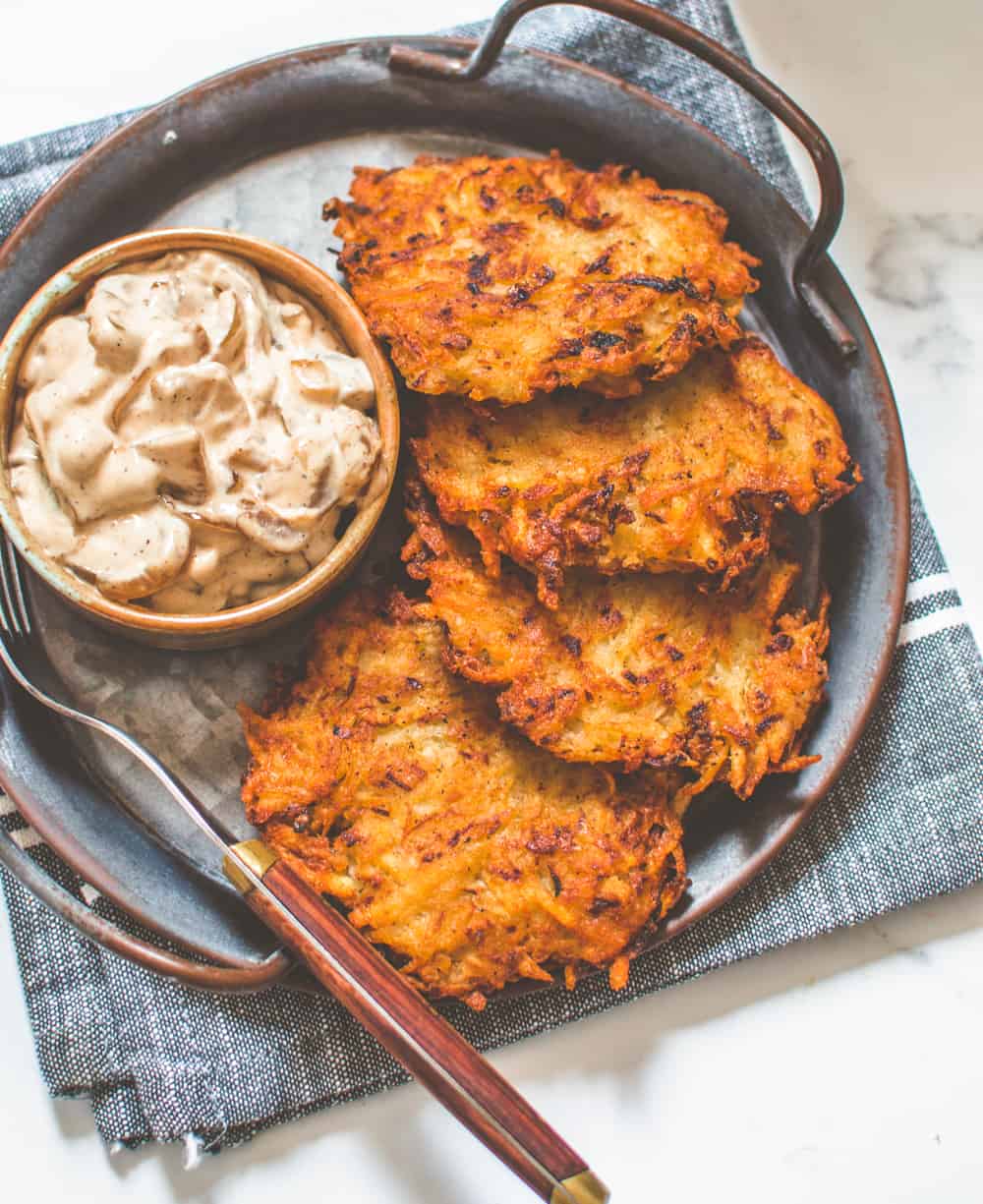 Pronounced “laat kuhz,” this heavenly holiday food is traditionally served at Hanukkah to celebrate the reclaiming of the Temple of Jerusalem by the Jewish community from Syrian-Greek king, Antiochus. The 8 day candle lighting ceremony symbolizes the number of days they received from a single day supply of oil when rededicating their temple. Because this temple was the holiest of Jewish places, the miracle of the eight days was a time of triumph with familiar and festive food for all.

This time-honored recipe usually includes eggs, but our vegan latke version omits this ingredient and is all the better for it! It’s amazing how some ingredients are entirely unnecessary for keeping a fantastic flavor. A tip for keeping your potatoes piping hot is to place them on a baking sheet in the oven on a low temperature (less than 200 degrees F) between batches.

Divine desserts served with latkes at any vegan Hanukkah celebration include:

Pass the Potatoes and Simple Substitutions

Though this potato recipe is perfect on its own, there are a few vegan variations that you can adopt, if you wish.

Stephanie’s Take on this Tradition

Stephanie Dreyer, the creator of this recipe, shares her thoughts on this traditional Hanukkah holiday favorite.

Potato pancakes or latkes are a traditional Hannukah food fried in oil and topped with sour cream or applesauce. Try this “chip and dip” vegan latke recipe for a fun twist on the traditional Jewish holiday favorite, featuring this decadent caramelized onion dip.

The holidays are a time to indulge and this dip does just that. The crispy fried tastiness of the latke makes it’s a natural chip for the onion dip, creating a fun, new way to eat your latkes this year. Of course, if you want to eat them traditionally, they’ll taste equally as well with a dollop of the dip on top instead! 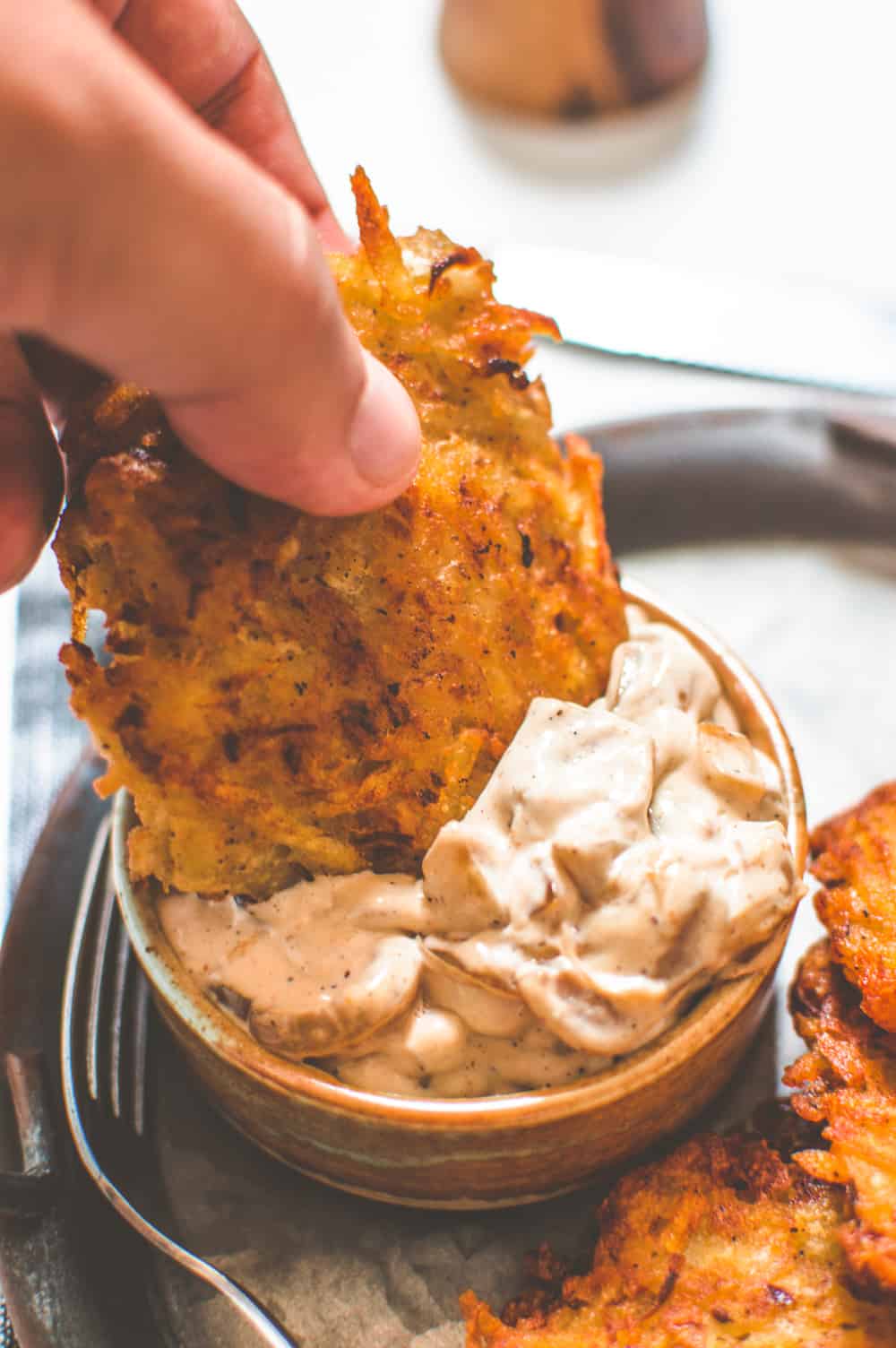 Latkes are always best enjoyed fresh. But any leftover vegan latkes can be stored in a covered container in the fridge for a few days. Longer than that and the potatoes may become sadly soggy and could go bad. If you think you might not be able to eat them soon enough, just pop them in a freezer-safe bag in the freezer for up to a few months.

To reheat out of the fridge, pop them back on the frying pan or place the latkes on a parchment paper lined baking sheet in the oven for 10-15 minutes at 350 degrees. Keep an eye on them, just in case your oven runs on the hot side. If you’d rather do a quick, crispy revival, place them under the broiler for a few minutes until the tops are golden again. If frozen, make sure to thaw overnight in the fridge or microwave on the defrost setting before baking.

Leftover latkes are delicious on their own, but also are delightful along with our Easy Vegan Chili, Vegan Waffles, or Squash & Cauliflower Soup. You could also try dipping them in a bit of Baba Ganoush Dip, Roasted Beetroot Hummus, or Tomatillo Salsa!

We want to thank our amazing recipe tester, Anna Sparks!

Vegan Latkes recipe by Stephanie Dreyer. Photos by Zhoro Apostolov for World of Vegan. Content and photographs copyright of World of Vegan™, all rights reserved. Please note that this article contains affiliate links which support our work at World of Vegan!