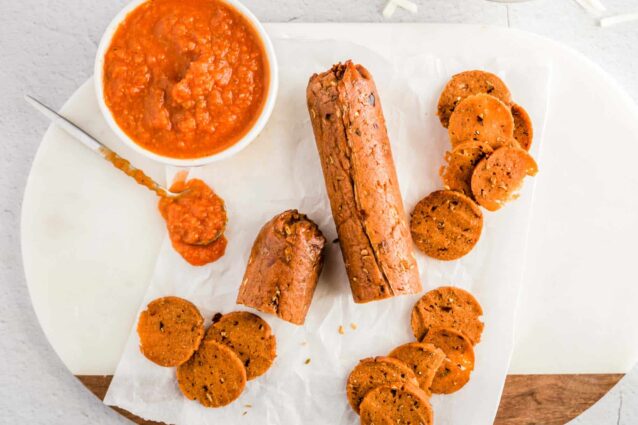 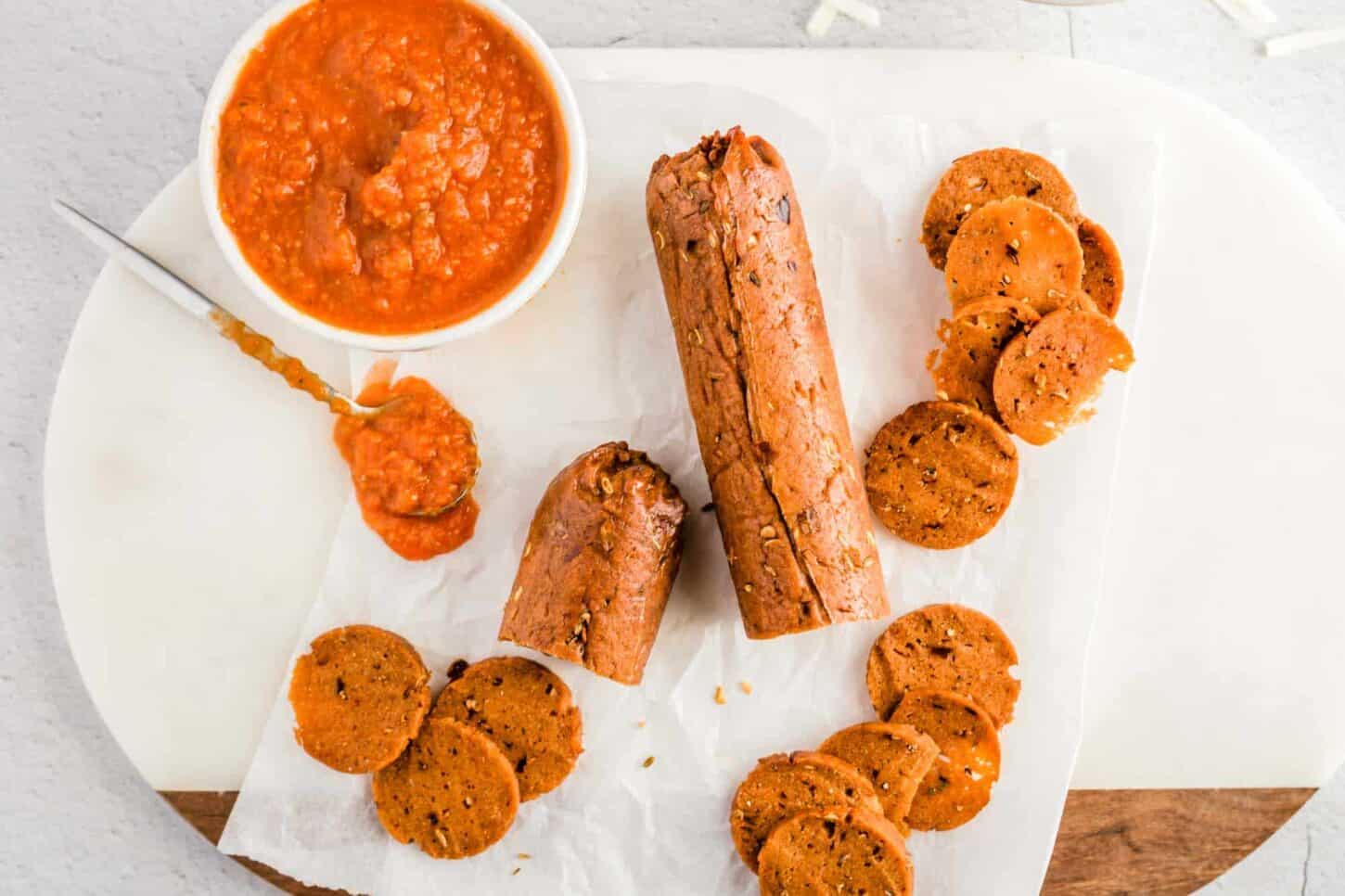 Pepperoni lovers, today is your day! We’re sharing not only a scrumptious take on a popular topping, but also a new cooking technique for you to tackle. This vegan pepperoni recipe is featured in the Crafting Seitan cookbook by Chef Skye Michael Conroy and truly can’t be beat.

We’re so excited about this recipe because we’re usually buying our plant-based meats packaged for us. Making your own at home is such a great opportunity to take a deep dive into the world of wheat gluten. Don’t worry, it’s far easier than you imagine and, if you like kneading, you’ll be even more impressed.

Why You Should Make This Recipe

You might be wondering why you should even learn to work with vital wheat gluten and we don’t blame you. Mastering a new method can seem pretty daunting, but we think you’ll actually find it fun. Imagine saving a ton of money making your own plant-based meats at home and not even have to peel off your pajamas. Fancy the freedom!

Having a little vital wheat gluten experience will not only give you more confidence in the kitchen, but it will bring such a new, delicious dimension to your weekly recipe round-up. Plus, vegan pepperoni is so freaking yummy and you’ll totally impress the heck out of your family and friends. And isn’t that the best reason? 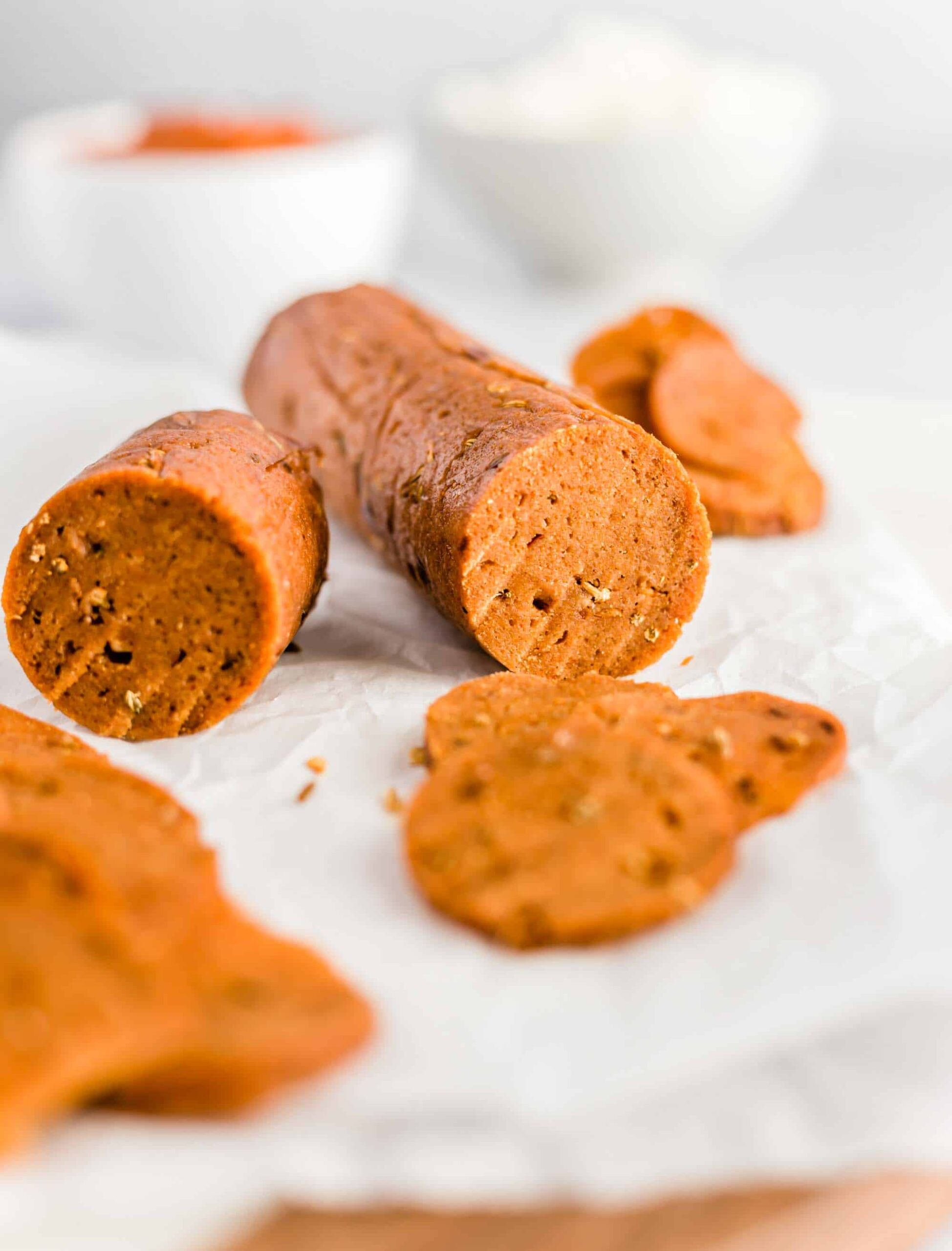 Tips for Serving Up Your Vegan Pepperoni Recipe

If you’re coming up short of ideas for how to serve this recipe, we have a number of tasty tips for you. Vegan pepperoni can add that extra oomph to transform a lackluster lunch or dull dinner into a full-on fancy and super fun feast! 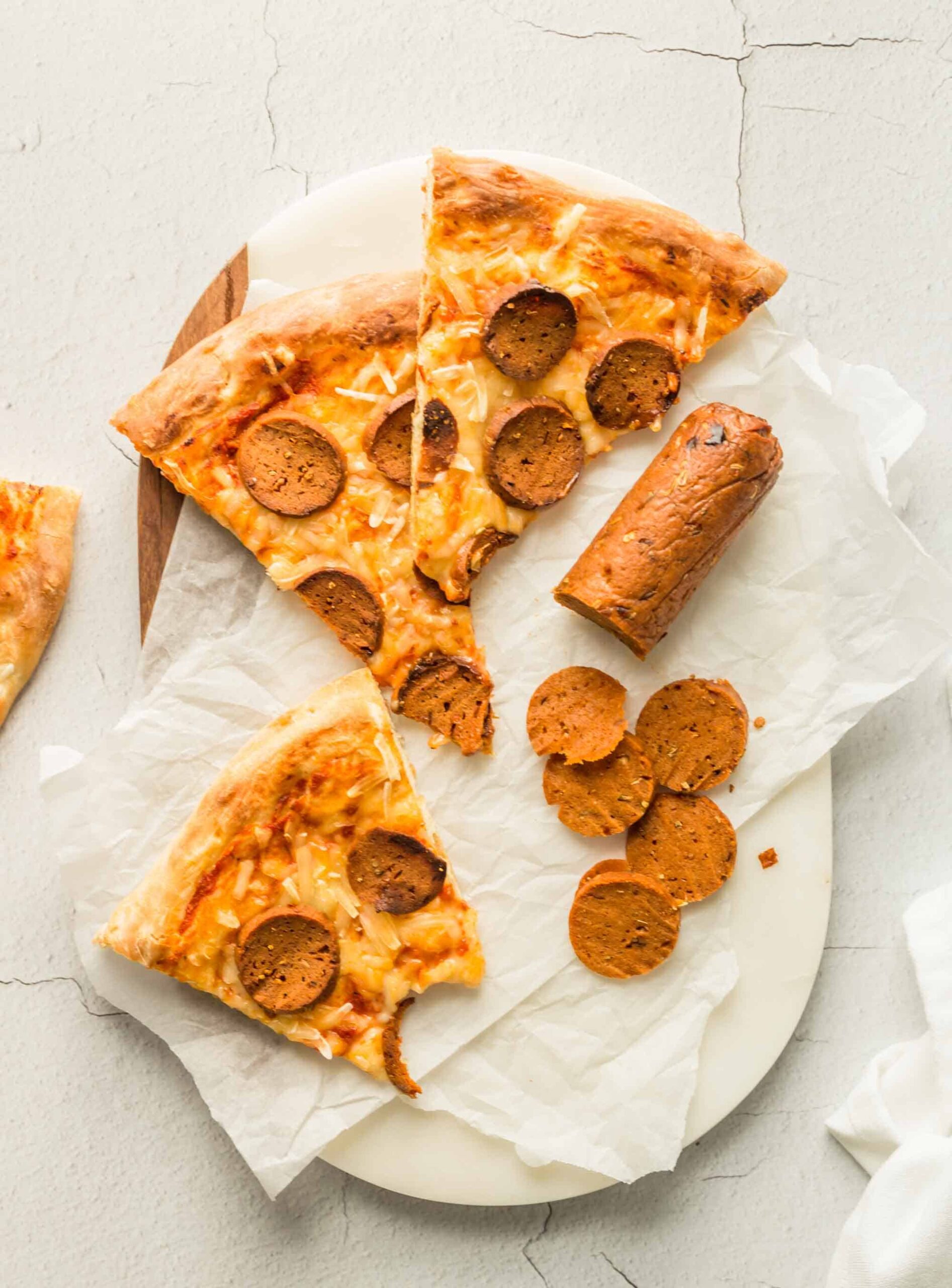 This recipe would be nothing without these items—the fantastic flavor, correct color, and simple savory aftertaste are all due to these incredible ingredients: 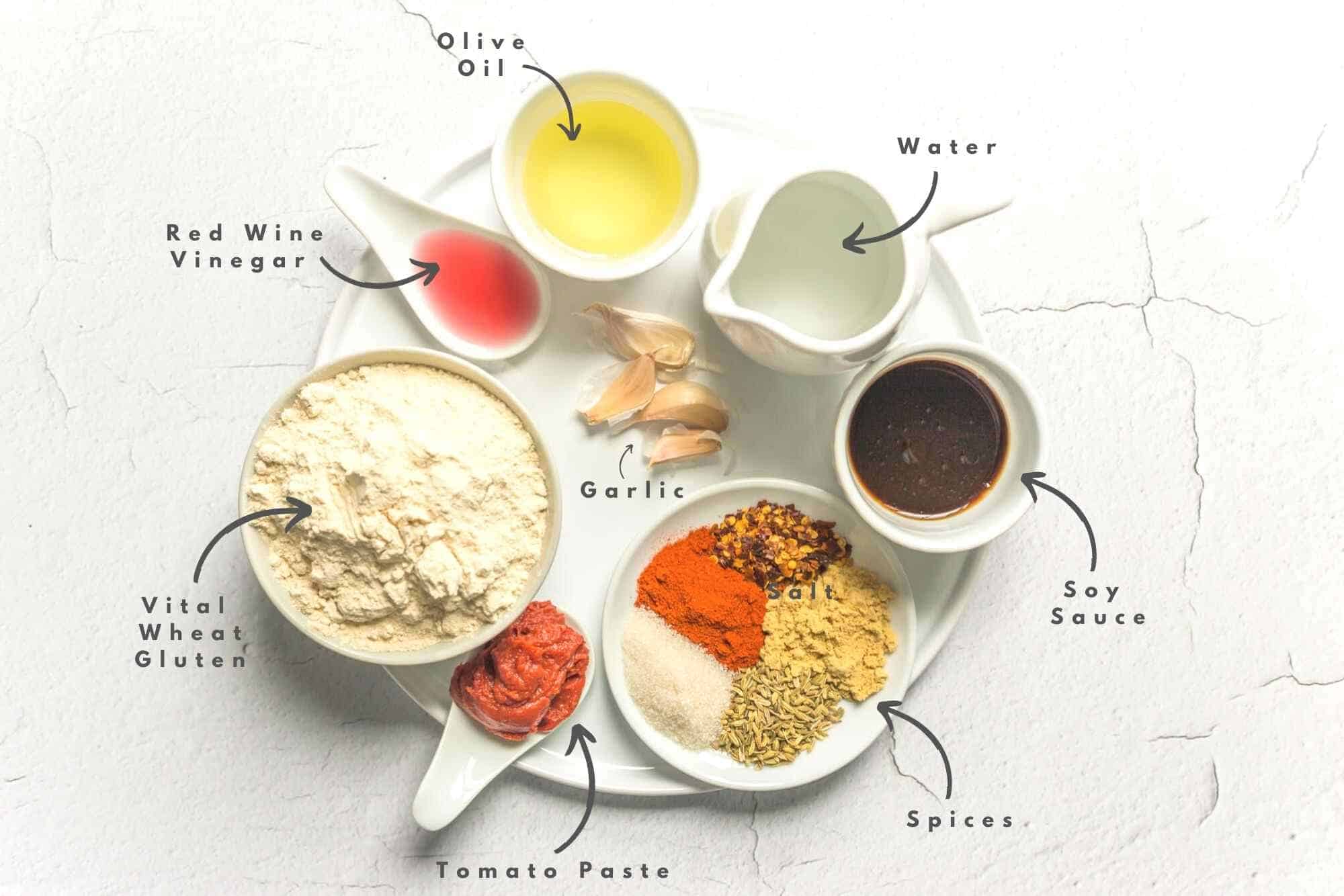 What is Vital Wheat Gluten?

What is this wacky ingredient? Vital Wheat Gluten may have a strange name, but it’s a relatively simple ingredient that is used to make the popular meat substitute: seitan. Seitan is the base of and many mainstream vegan meats on the market, and you can also easily make it at home, as we’ll teach you to do today!

Not a flour in itself, vital wheat gluten is mostly made of wheat flour that has been hydrated and then had pretty much everything taken out except the gluten and a tiny bit of starch. The resulting concoction is then dried and ground back into a flour-like consistency. Using vital wheat gluten in a recipe gives whatever you are creating an elasticity that results in a chewy texture that imitates meat.

How To Make Vegan Pepperoni With Vital Wheat Gluten

First, you’re going to add your vital wheat gluten to a large mixing bowl. This will be the base of the seitan, but of course we need to add all the spices and flavor mix ins, plus the water!

Next you’ll blend all the mix-ins together in a blender. So go ahead and add the water, olive oil, tamari or soy sauce, tomato paste, vinegar, and spices in your blender and blend until smooth. Add this mixture to the vital wheat gluten flour along with the minced garlic, and mix it together to form your seitan pepperoni dough.

Set a one-minute timer and knead away! It’s important to knead your seitan dough until it becomes elastic-y, which will take around a minute.

Cook Your Seitan Pepperoni Logs in the Oven or Pressure Cooker

Then, just follow the recipe below to form it into two 6-inch logs, wrap them in foil, and either oven-bake or pressure cook those beautiful pepperoni logs! Once they’re done and fully cooled, you’ll want to pop them in the fridge for several hours before you slice them up and use them on pizza and beyond. 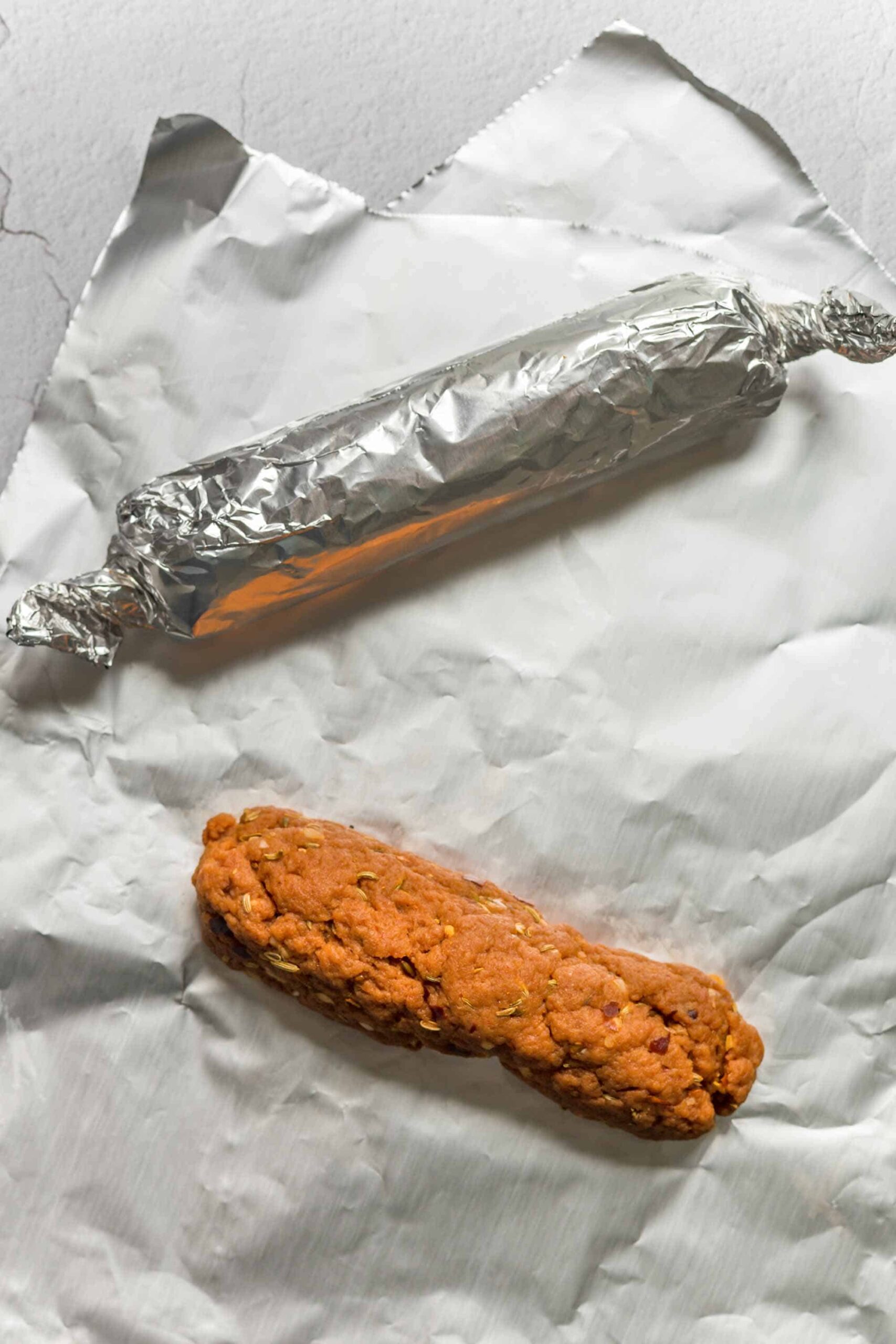 Although the equipment needed might seem a little overwhelming, it’s really not. We promise. Just a blender for mixing, foil for rolling, and either a pressure cooker (like an Instant Pot) or regular oven for cooking. You’ll be amazed at how simple it really is once you get the hang of it!

5 from 6 votes
Vegan pizza lovers rejoice! This recipe for homemade vegan pepperoni will make your dreams of having a Vegan Meat Lover's pie come true! Also great for spicing up a pasta sauce or salad. 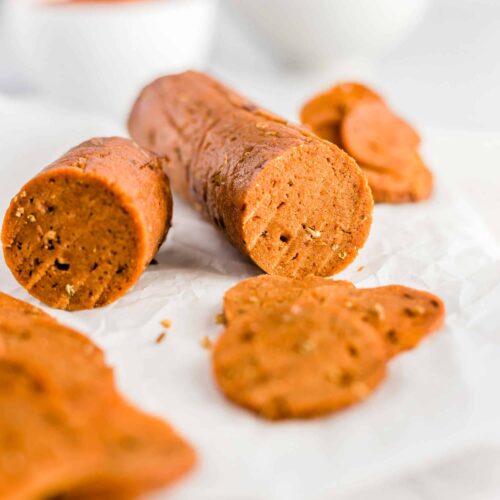 Even though this recipe is pretty straight forward, we’re happy to help answer some of the most frequently asked questions from our readers. 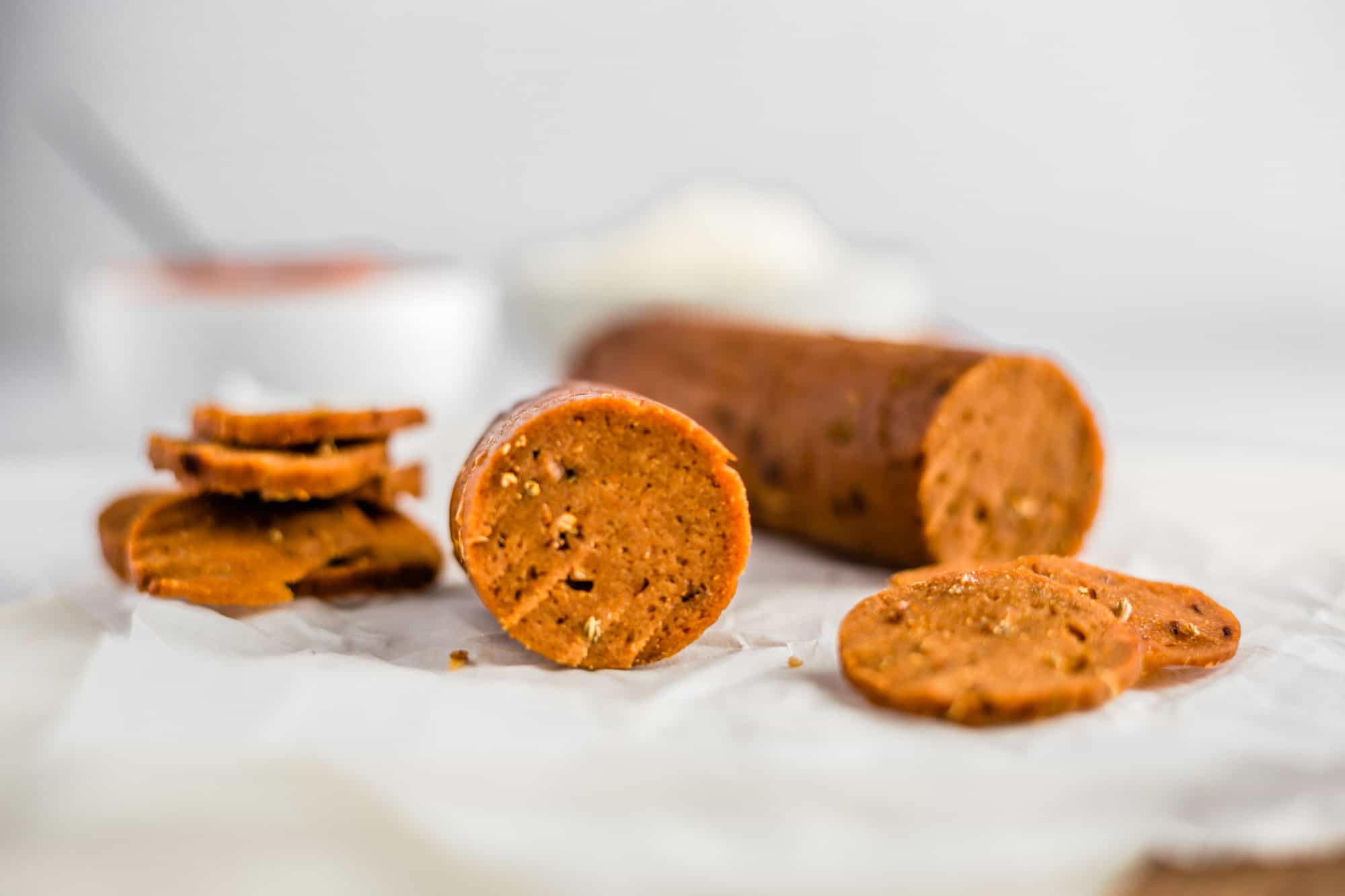 Skye Michael Conroy’s career as a certified Plant-Based Certified chef started with a hobby of creating self-published cookbooks. After training with chef Chad Sarno, he was able to concentrate more on plant-based cooking and food science. His other passions include gardening, landscaping, his partner, and his pets. Find out more about Chef Conroy on his website, The Gentle Chef.

Many thanks to our recipes testers Taylor Gillespie, Sage Konans, Annie Sparks, and Andi Combs for helping to perfect this recipe!

This Vegan Pepperoni recipe was reprinted with permission from the Crafting Seitan by Skye Michael Conroy (Book Publishing Company, March 1, 2021). Vegan pepperoni photos by J.J. Steele for World of Vegan. Article written by Gina House and edited by Amanda Meth. Please note that this article contains affiliate links to help support our work at World of Vegan!