5 from 8 votes
If you're looking for a classic, fudgy brownie made vegan, look no further! These are the best vegan brownies, made extra chewy and chocolatey with simple swaps—even omnivores devour them! 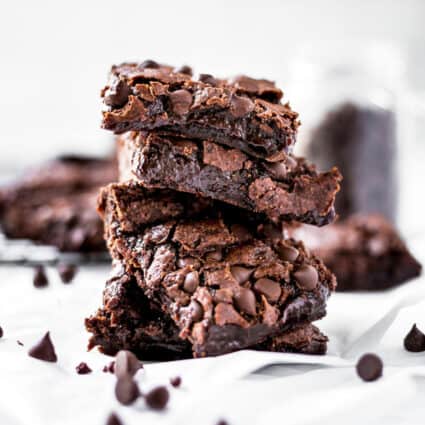 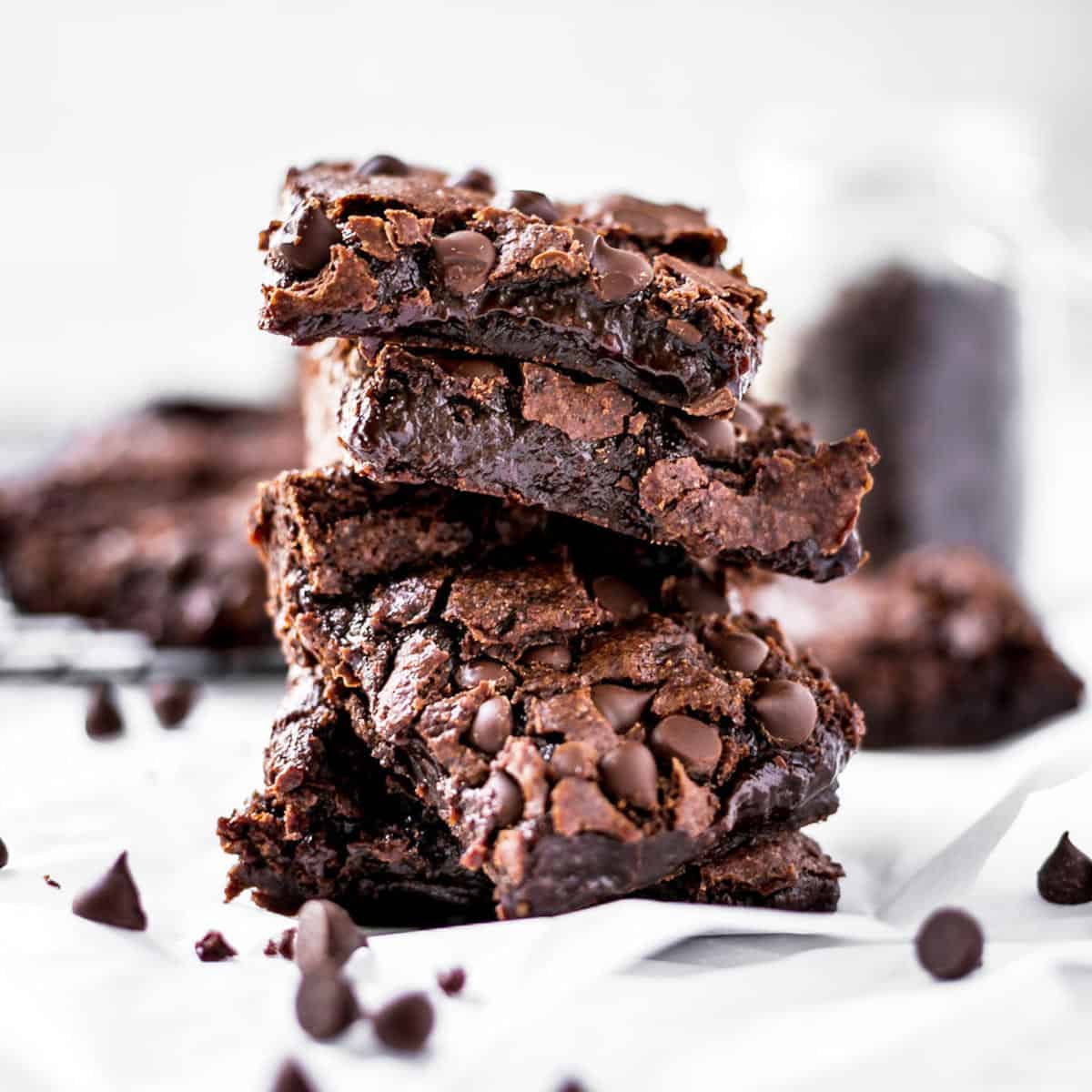 Behold our brand new recipe, Brownie Lovers! When the creamy chocolate craving starts calling to you, these super vegan fudge brownies from The Friendly Vegan Cookbook can (and will) be your best friend. Chewy, sweet, and utterly satisfying, one bite is guaranteed to win you over.

They have the perfect texture with crinkly tops and wonderfully rich flavor to tame the Chocolate Monster within. If you have a little bit of patience, make them the night before and devour them the next day. Our brownies are even better after baking and a night of beauty sleep in the refrigerator.

What are we waiting for? Let’s get baking!

We always recommend following our baking recipes precisely since baking in such a delicate art and our recipes have been rigorously tested as they are. But we totally understand if oil is not an option for you or you might not have ground flaxseed in the house. Though these vegan brownies won’t be entirely the same flavor or consistency, you can still make, bake, and enjoy them by swapping out some of these ingredients:

A quick note: This recipe has been tried and tested by a whole team of recipe testers and our team loved these vegan brownies exactly as-is written, and baking recipes can be very finicky. We haven’t tested the swaps above, so proceed at your own risk! If you give any of these ingredient swaps a try, let us know how it went in the comments below.

How to Make The Best Vegan Brownies

These fudgy vegan brownies are actually quite simple to make and are ready in under an hour with only 15 minutes of active prep time! Here’s the easy process or reference the printable recipe card at the bottom of this post.

How to Serve Up Your Vegan Fudge Brownies

These rich and fudgy squares are out-of-this-world on their own, but there are several ways to bring out the best brownie flavor. Which option activates your appetite the most?

We love that vegan brownies are super easy to store (and eat!). If you’re lucky to have any leftover, you can either keep them on the countertop at room temperature for up to three days or store them in the fridge for up to a week. You can also freeze them in a covered container for up to 3 months.

To thaw from freezing, simply let the brownies sit in the fridge overnight or on the counter for a few hours. Giving them a zap in the microwave for 30 seconds might help, or better yet, throw a few in the toaster oven for a few minutes with extra vegan chocolate chips on top. Yum!

My Brownie Batter is Too Thick—Help!

Don’t fret. This recipe is different from most traditional brownie recipes. Instead of a soup-y batter that you can pour into your baking pan, the batter in this recipe should be very thick, more like a brownie dough than a batter. The dough should be scooped and pressed into the brownie baking tin (as pictured).

Are These Fudgy Brownies a Healthy Snack?

Broccoli is a healthy snack. Air fried tofu is a healthy snack. Our creamy mango smoothie is a healthy snack. These brownies are not what you would consider “healthy” brownies. These are decadent, gooey, chewy, fudgy, you’ll-never-know-they’re-vegan brownies. They have the advantage of being 100% plant-based and also homemade, but they do contain sugar, oil, and chocolate chips. They’re a special treat and great to have on hand when your sweet tooth is tempting you.

They do have some health wins that raise the bar from other brownies. In addition to the calcium and protein from the soy milk, these vegan brownies bring in omega-3s and fiber from the ground flaxseed, and a little bit of theobromine from the cocoa powder. You can boost up the antioxidants by using raw cacao powder, as well.

5 from 8 votes
The most chocolaty, chewy brownies we've ever tasted! Quick to make and perfect for meal prepping. These super fudgy vegan brownies taste even better the next day. You'll be amazed at how wonderfully rich they are—you might be tempted to eat the entire pan yourself!

Yes, you can dive into these right out of the oven. But these brownies are best when enjoyed chilled for 4 hours, straight out of the fridge. Leftovers – Store in an airtight container at room temperature for up to 3 days or up to a week in the refrigerator.