How to Order Vegan at McDonald’s in the USA 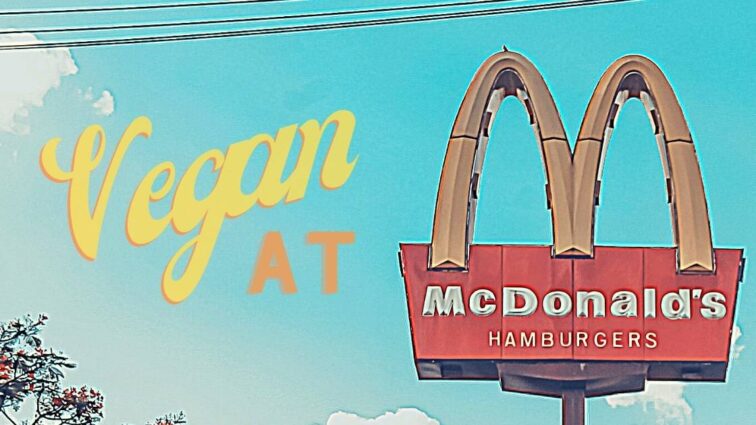 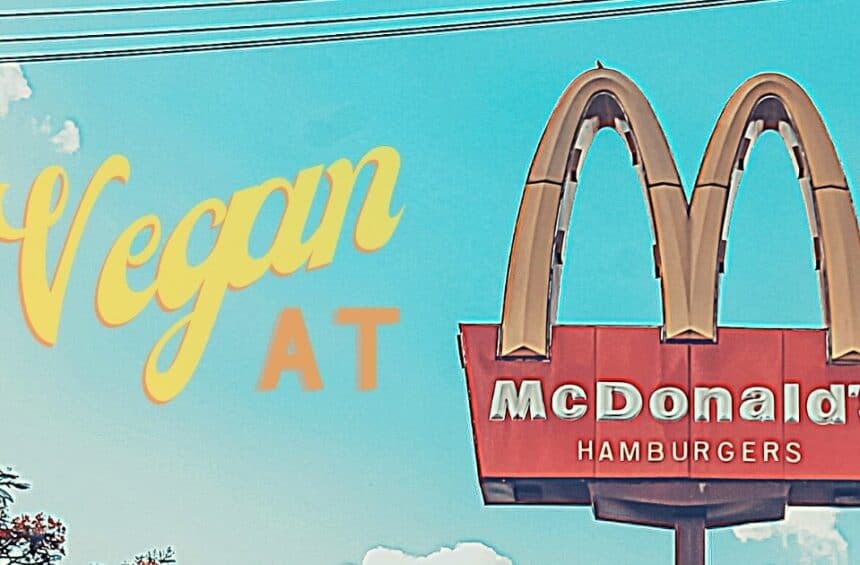 This Vegan McDonald’s Fast Food Guide details everything you can order off the McDonald’s menu that’s vegan in the USA. All the vegan options listed are also plant-based, vegetarian, dairy-free, and cholesterol-free. Read on to see where you can find the new McPlant Vegan McDonald’s Burger, and also get a glimpse of other more exciting vegan specials available abroad. Unfortunately, the current vegan options at McDonald’s in the USA are quite disappointing—but that should be changing soon!

How many times have you been on a long road trip and the only highway food sign points to a McDonald’s? Your omni friend pulls off the highway feeling elated at the thought of a so-called “Happy Meal”—but you only feel pain.

What can a vegan possibly eat at McDonald’s? Do you need to resort to the bruised apple under the seat or to the Larabar that you bought last year?

We’ll be taking you through everything you can eat that’s vegan at McDonald’s, as well as what to avoid.

Be Forewarned: Your Vegan Options at McDonald’s Are Limited

Sadly, at this time the list of vegan-friendly foods you can feel good (but let’s be real—not great) about ordering at McDonald’s is very small. We go into the true vegan options down below, but first, take a look at this list of items that you might have thought were safe, but are sadly not vegan.

Unfortunately NOT Vegan at McDonald’s (in the US):

When Will the Vegan McDonald’s Burger (McPlant) Be Available in the USA?

After decades of offering zero options catered toward vegans, McDonald’s has finally turned a corner with the international launch of the new vegan McPlant Burger! This is essentially a vegan BigMac. They are doing a slow-but-steady rollout of the McPlant burger, and have thus far tested the McPlant burger in Sweden, Denmark, the Netherlands, Austria, and the U.K. It’s gotten rave reviews and is now starting to be tested in select U.S. McDonald’s locations.

According to a meat industry news outlet, the plant-based McPlant burger tests have exceeded expectations, and McDonald’s is expected to continue rolling out the McPlant burger in the US in 2022.

‘Our conversations indicated the McPlant test performed exceptionally well in its handful of locations, with very limited operational challenges.'” 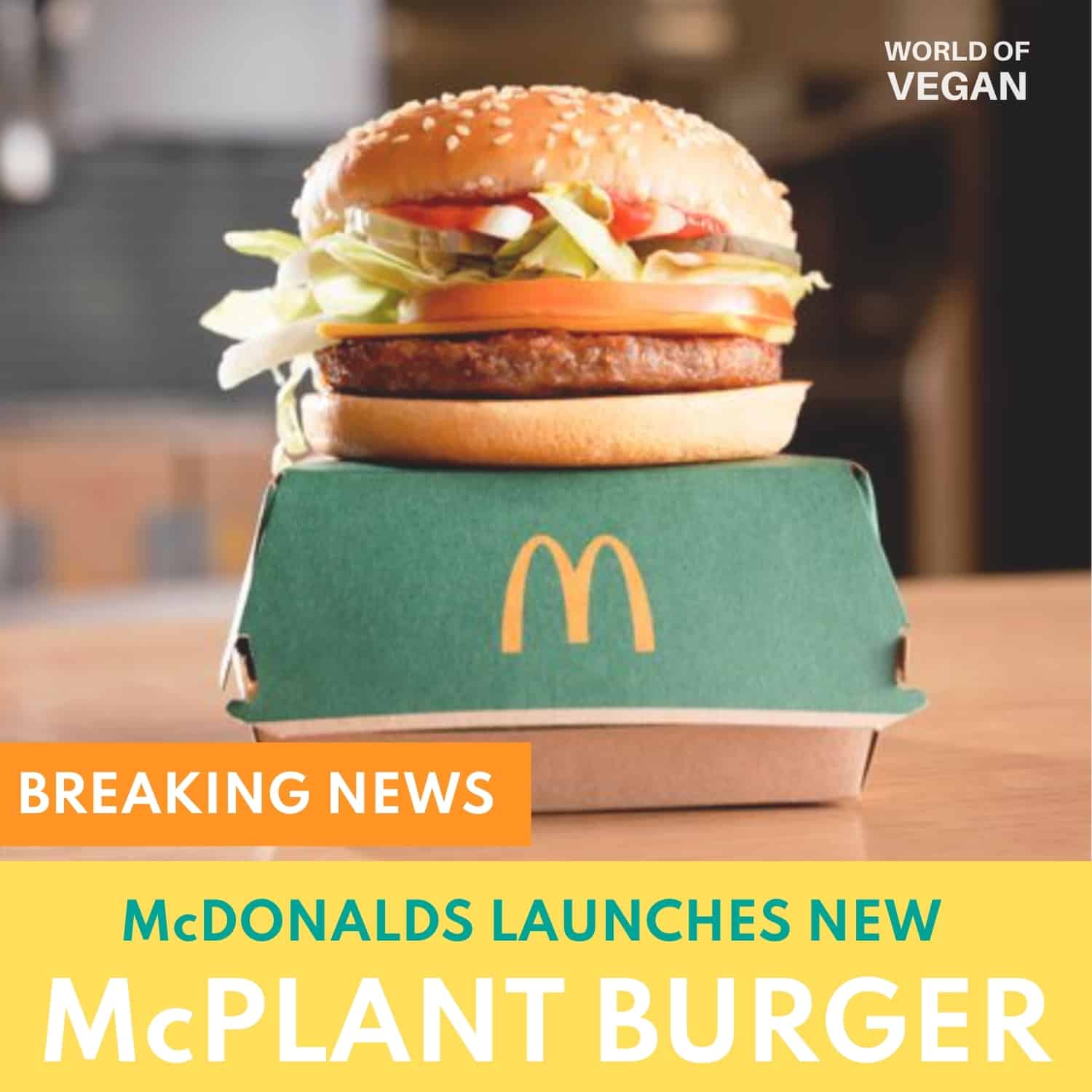 There aren’t any plant-based meat options at most U.S. McDonald’s locations yet, but there have been hints that they may offer a plant-based burger in the near future. And if the fast-growing vegan options at other fast-food restaurants are a sign, it’s only a matter of time for McDonald’s to follow suit. Cross your fingers!

We’ve seen the new vegan options explode in popularity at fast-food giants like Burger King, Carl’s Jr., Taco Bell, Del Taco, and more. So, c’mon McDonald’s…what are you waiting for?

For now, here’s what you can order from the McDonald’s vegan menu for breakfast, lunch, dinner, and snacks—and how you can get creative with these very limited options.

How to Make Meals From The McDonald’s Vegan Menu 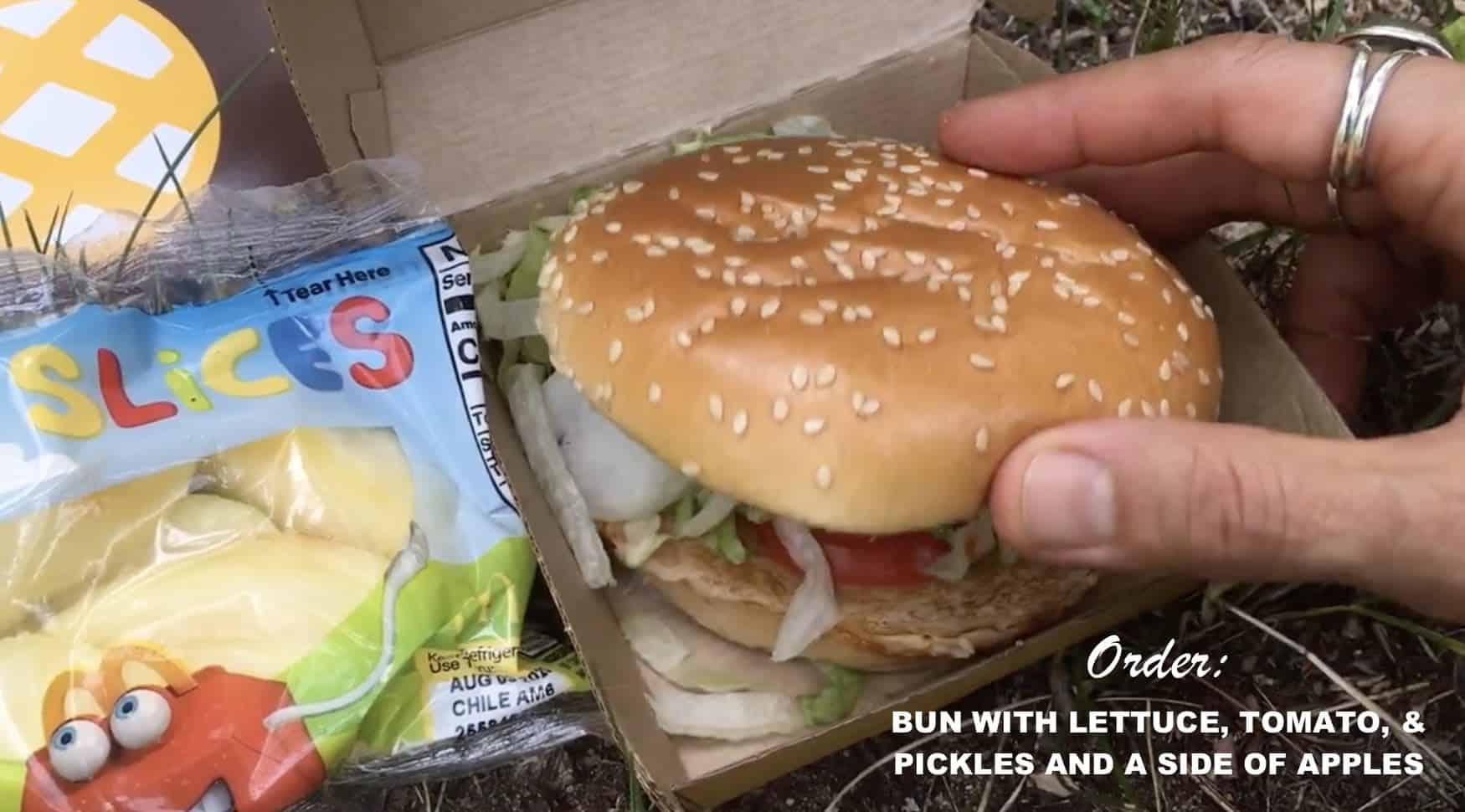 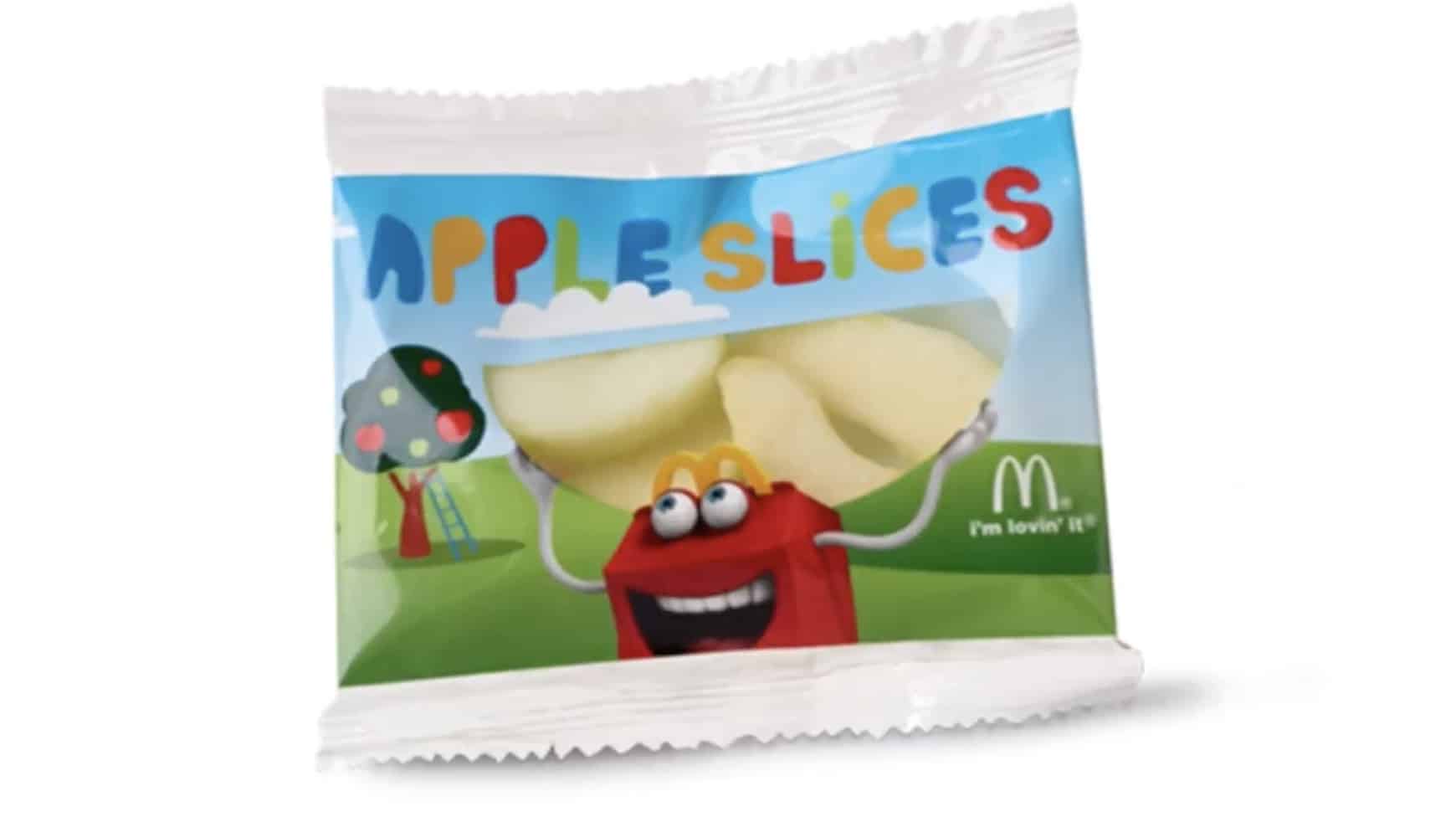 Bring Your Own Extras & Add-Ons

If you’re able to keep some of these in your car, pocket, or purse, you’ll improve your chance of having a satisfying meal when visiting McDonald’s. They’re also perfect snacks on their own!

Sadly, NO. Even the french fries at McDonald’s aren’t vegan—at least not in the United States. Some other countries (such as Canada) do have vegan fries, but if you’re in the US, pass on the fries.

Generally, when vegans swing by burger joints, we can sigh and say, “Well, at least the fries are vegan.” That this is not the case at McDonald’s is a travesty we may never get over.v

Yes, sweet friends! The McDonald’s apple pies are vegan! They are what we call “accidentally vegan.” McDonald’s certainly didn’t design them for specifically vegans, but they don’t happen to include any animal products! No meat, no eggs, no milk, no butter, and no dairy whatsoever.

What about the sugar? Is the sugar in these Apple Pies vegan? It’s not made with vegan-certified sugar, but we still consider it vegan (in the same way that vegetables are considered vegan even if they’re grown in cow manure). If you’d like to learn more about the vegan status of sugar, read our “Is sugar vegan?” article. 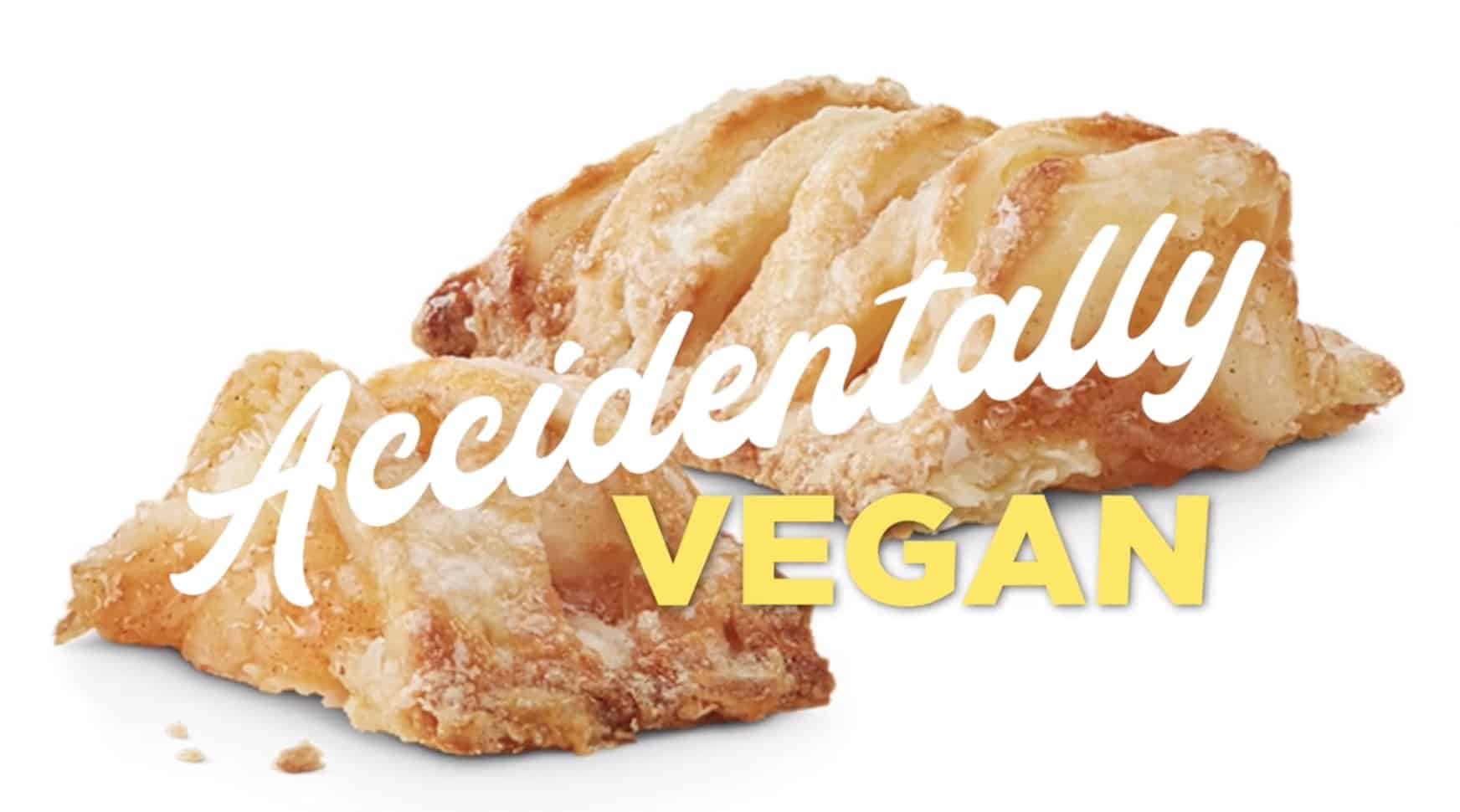 Vegan Dishes at Other McDonald’s Locations (Outside the USA)

What is the McPlant Burger Patty Made From?

The new McPlant is made with a Beyond Meat burger patty that has actually been certified vegan by the UK’s Vegetarian Society. Not only is the McPlant burger completely vegan, but McDonald’s has also made the decision to cook the vegan patties on a separate grill from their other meat and dairy items. While cooking vegan items on a grill that’s not exclusively vegan is acceptable to many (but not all) vegans, it’s still a very nice gesture that we certainly appreciate.

What is on the McPlant Burger, you ask?

The standard fixin’s that come on a McPlant burger—besides the Beyond Meat patty—include vegan sandwich sauce, lettuce, pickles, tomatoes, and the much anticipated McDonald’s vegan cheese! According to McDonald’s, they tested dozens of vegan cheese brands from many different countries before setting on coconut oil-based cheese slices made in collaboration with an Irish company called Kerry. The vegan cheese slices look just like a classic orange slice of American cheese—and many people have said they tastes nearly identical!

It’s only a matter of time before the McPlant burger is available at every McDonald’s location, just as the Burger Kind Impossible Whopper and Carl’s Jr. Beyond Famous Star burgers have become a staple on every menu. The list of McPlant locations is quickly growing and we eagerly await the McPlant burger USA rollout!

When Will There Be Vegan McDonald’s Nuggets?

We know how it goes, sometimes you land at a McDonald’s and have to make it work. However if you’re able to convince your friends to swing by another eatery, fast food chain, or heck—even a gas station instead, you’ll likely have far better luck getting a filling meal. Here are some of the best fast food options for vegans.

Knowing that there are various vegan options at mainstream burger chains makes it much easier when traveling or hanging out with friends. These are tried and true chains which offer more than one choice for a meal. We promise you won’t leave hungry!

Here are some up and coming chains that offer fantastic fast food, including mouth-watering veggie burgers, golden fries and scrumptious shakes!

How to Order Vegan at Other Chains

Don’t miss our comprehensive vegan fast food guide that breaks down what you can get at all the major fast food chains, such as: 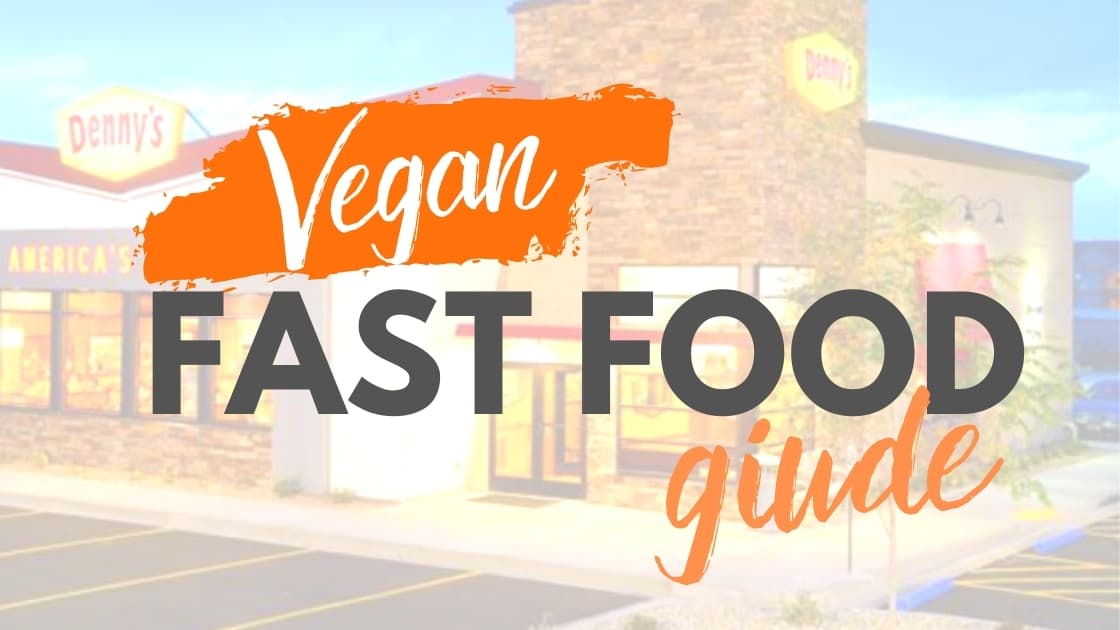 Have you found any other options to be veganizable? Did you find something amazing that we missed? Send us a message and let us know and tag #worldofvegan and @vegan on Instagram to share your favorite vegan at McDonald’s creations with all of us!

Disclaimer: At the time of this vegan McDonalds article (last updated in 2022), all of the foods mentioned above are vegan. Since restaurants constantly update their menus, add or take away items, and reformulate menu items, please keep this in mind when ordering your food. There may be new items that are vegan and not listed above or items listed here as vegan, which are no longer vegan. Take care to double-check. Good luck!