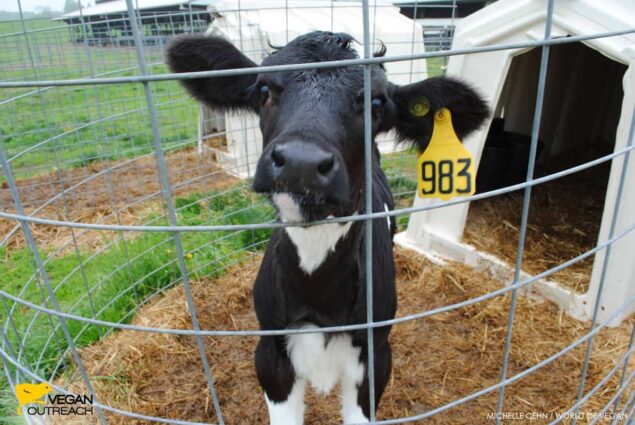 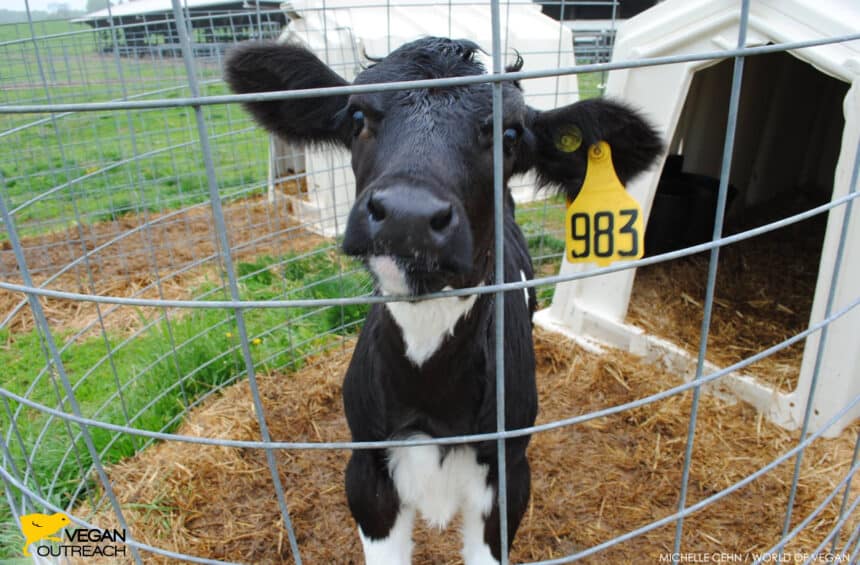 The dairy industry is notoriously one of the most cruel, heartless, and exploitative industries in all of animal agriculture. Cow milk production involves artificial insemination using a “rape rack” (industry term), intensive confinement, separating mothers from babies at birth, and slaughter. Not to mention that the veal industry is a direct byproduct of the dairy industry.

Have You Ever Met a Cow?

Despite the fact that almost all of us grew up drinking milk, few of us have ever met a real live cow.

Magical Milk Machines? Far From It.

As children, we’re taught that cows are magical milk machines that need to be milked, and many people even believe that we’re doing cows a favor by milking them. We see commercials showcasing “Happy Cows” grazing on rolling green hillsides and packaging that reinforces this facade. It’s time for a reality check.

There’s a whole lot more to the story. So, take a deep breath and let’s take a look at how milk—the foundation of all dairy products—is actually produced.

Just like humans (and other mammals), female cows produce milk for the sole purpose or nourishing their young.

The difference on a commercial dairy farm is that cows are impregnated by a human, using artificial insemination—a blatant violation of the female reproductive system. And you don’t even want to know how the semen is collected.

A pregnant cow has a gestation period of nine long months, just like we do. When her calf is born, she’ll usually have no more than one or two days with her baby, and in some cases, her baby is taken from her immediately to prevent the loss of even a drop of valuable milk, which would cut into the profits of the dairy industry.

Like most moms, cows have powerful maternal instincts and are extremely distressed when their babies are taken away from them. Their anguished bellows can be heard for up to a mile away. Some cows are so distraught that they will even stop eating.

You have to ask—is a bite of cheese really worth ripping a baby from his mother?

As soon as her baby is taken away, mama is hooked up to a milking machine to take the milk that her body made for her calf. In nature, a cow produces just 12 to 15 pounds of milk each day and nurses her baby all day long. But in the majority of today’s dairy operations, she will produce a staggering 50 pounds of milk daily and the pressure of her painfully loaded udder will only be relieved by mechanical milking twice a day. As you can see, this is very different from the romanticized vision of a farmer sitting on an overturned pail hand-milking a cow.

Slaughtered As An Adolescent

Once her milk production declines after about a year, the traumatic cycle begins all over again. She will again be forcibly impregnated and suffer the heartbreak of losing another child, and again have to endure mechanical milking. This cycle will continue every year of her life until she is slaughtered as an adolescent, at the age of just 4 to 7 years old. The natural lifespan of a cow is 25 to 30 years. When she is all used up, can no longer produce milk, and is of no further use to the farmer, her body will be butchered for meat, most likely for hamburgers.

The Treatment & Fate of Her Baby Cows

Now let’s talk about what happens to her babies. According to the USDA, 97 percent of calves are taken from their mothers within the first 12 hours after birth.

If the calf is female, she’ll endure the same fate as her mother. Once separated from mama, she’ll be kept in a small isolated pen with barely enough room to move around.

Because her own mother’s milk was taken away, she’s fed a milk replacement formula. She will live like this for 6-8 months until she reaches puberty. In nature, this is the time when she would be running, playing with other cows, and bonding with her mom. But in the dairy industry, she’s denied everything that is natural to her. As soon as she’s fertile, she’ll be impregnated just as her mother was, and will endure the same miserable cycle of birthing, grieving, artificial milking, and eventual slaughter.

Keep in mind that 50 percent of the babies born will be male, and a male calf has little financial value to the dairy industry because he’ll never produce milk. So, he’ll either be kept and raised for beef, slaughtered immediately for cheap veal, or sent to a torturous facility to become higher priced veal. Here, he’ll be fed an iron-poor diet until he becomes severely anemic and can barely move. His muscles will atrophy, and at just a few months of age, he’ll be slaughtered. His tender, pale flesh will be sold as veal.

Yes, cows and humans are different, but cows have very strong maternal instincts just like humans do. Looking through the eyes of a cow, my experience of motherhood seems like a privilege. But it isn’t. It is the birthright of every mother and child.

And yet in the dairy industry, mothers and babies endure this heartbreaking loss over and over again throughout their lives. The exploitation these females and their babies are forced to suffer just to bring a chunk of cheese or a glass of milk to someone’s table displays a depth of cruelty that’s unimaginable to any human mother.

Is Cow’s Milk Really Worth It?

Is so much misery really worth a fleeting moment of pleasure on the palate, especially when there are so many other options that are even more delicious? With a vast and growing number of delectable plant-based choices, we can easily choose both great taste and compassion in every bite.

You may be surprised to learn that these marketing buzzwords you might see on meat, dairy, and egg labels don’t guarantee better lives for the animals. The mechanics remain the same, including the unavoidable separation of baby from mother, painful surgical mutilations without anesthetic, factory-style milking, and premature slaughter.

In this Plant-Powered People Podcast episode co-hosts Michelle Cehn and Toni Okamoto discuss the issue with dairy, and why they went from vegetarian to vegan.

The Dairy Industry & Our Current Food System is Broken

Today’s food system is tragically flawed and is wreaking havoc not only on our own bodies but also on billions of animals who are unwittingly entangled in this industry. It’s time we take a stand for kindness and choose milk made compassionately and sustainably. From plants.

Every dollar we spend at the grocery store is a vote for the kind of world we want to live in. Many people think that their food choices are personal. But remember that a choice is no longer personal the moment it affects someone else. And when you choose dairy, someone else suffers the consequences of your choice, every time.

Even if the mechanics vary slightly—from factory-farmed to family-farmed—for the animals, it’s all just different versions of hell.

When I first learned all this, I felt awful knowing that I contributed to this cruel industry. The thing is that I didn’t know before. And now that I do, I can make kinder choices. When we know better, we can do better.

If you need support, we’ve created The Dairy Detox to help you do just that. The 12-Day Dairy Detox is an online program that teaches you how to thrive without dairy in just 12 days. With daily videos, delicious recipes, a sample meal plan and more, you’ll have the support you need to align your food choices with your values and choose kind food at every meal.

You can also find dairy-free recipes in The Dairy Freedom Cookbook. Enjoy!

We hope you found this article about what’s wrong with dairy informative. Video and written content by Michelle Cehn and Allison Rivers Samson from The Dairy Detox. Photos by Michelle Cehn, Kara Schunk, and Farm Sanctuary.