You Are Here: Home → Sadly, Pig Beach Isn’t Paradise for the Swimming Pigs 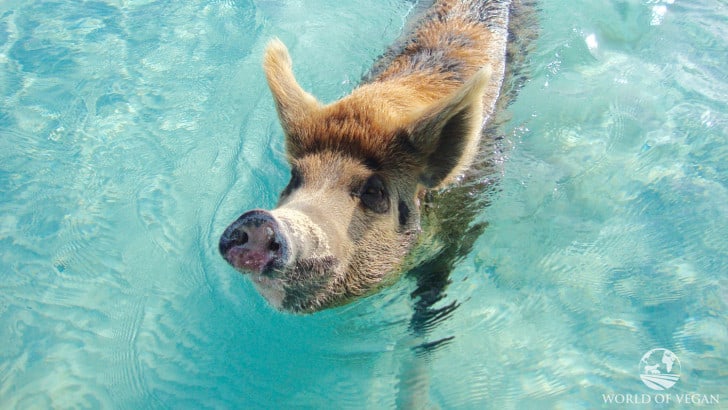 An uninhabited island in the Bahamas, crystal clear waters with tropical fish swimming by, and an endless supply of treats from locals and visitors. Sounds like any pig’s dreamland, right?

That’s what I thought when I stumbled upon photos of the swimming pigs on “Pig Island” and booked my honeymoon trip to the Bahamas. As a long-time lover of pigs, I thought that nothing in the world could top seeing pigs run free on their own island experiencing total liberation. I couldn’t wait.

But when my husband and I anchored our boat at pig beach, my excitement quickly faded as I had a sinking feeling that something wasn’t right. Really, a lot wasn’t right.

Reality Hit—Pig Beach Was Not A Happy Place

As I stepped off our little motor boat I was immediately greeted by a stampede of hungry adult pig snouts desperate for food. I threw my open palms in the air signaling to them that I didn’t have any food on me, and they recognized that and quickly lost interest.

It was then that the babies came running over. “My goodness,” I thought. There were tons of them! 10, maybe 15 piglets. Clearly multiple litters. I kneeled down to greet them. They were so tiny—and dirty! They explored my hands, my shoes, my camera—everything—with their little snouts covered in sand.

After recovering from the glee of fraternizing with little piglets in paradise, I started to notice the abrasions on their skin. I looked closer and saw that the skin on their snouts was peeling, and they had little scabs and marks on their tiny heads.

I thought back to my visits to Farm Sanctuary, and recalled how the staff there would put sunblock on the pigs during the summer because their pale skin is sensitive and can easily burn. I started to worry that all of these pigs were suffering from severe burns from being exposed to the strong Caribbean sunshine day after day.

I spoke with Susie Coston, Farm Sanctuary’s National Shelter Director and the best pig expert I know, and asked her about how the prolonged sun exposure might be affecting the pigs. She said:

“Like anyone, too much sun is not good. Pigs can get skin cancer and other illnesses and likely suffer for a long time without treatment.”

She also reminded me that in nature, pigs coat themselves in mud as natural sun protectant, but on the sandy beach in the Caribbean, they don’t have access to mud.

There Were So Many Piglets…What Would Happen To Them All?

But it gets worse. Before I even arrived, I wondered what would happen when the pigs started overpopulating the infamous “Pig island,” since there were no predators around and the only limiting resource, I imagined, was food. It didn’t take long to find the answer to that. This clearly wasn’t a big, lush island that pigs inhabited. From what I saw during my week in the Exumas, all of the pigs were on the little sandy beach all of the time, because that’s where their food source was.

I counted them. There were maybe 20 or 25 pigs total, and most were babies, adolescents, or young mothers. “Where are all the other pigs?” I asked one tour guide who was boasting about how she named all the piglets, and comes every day to feed them pancakes or veggies. She mumbled something like, “oh, they must be in back.” In back of what? The rocky island, away from their food source? When I pressed further, she quickly changed the subject and no longer had any interest talking with me. Hmm…

I Learned That Pigs on Pig Beach Are Slaughtered…

Finally, I got a more upfront answer from one of the locals who grew up on a neighboring island. With confidence, she said, “oh, they have to kill the pigs or there would be too many—especially when they get aggressive. They can be a danger to the tourists, so they have to go.” She swiped the edge of her hand against her throat as if her words weren’t clear enough. I pressed on, asking, “Wait, so the pigs on Pig Beach are killed?” She replied, “Yeah—but don’t worry, they roast them on a skewer and eat them, and nothing goes to waste. And no, we don’t serve them at the restaurant here—a lot of people ask that!” She giggled.

My heart sank. The entire reason I chose this honeymoon destination was because I wanted to see pigs who had never been exploited, and who got to live out their entire lives in total freedom. Boy, was I naive.

This Tourist Attraction Was No Paradise For The Pigs

The photos and videos I had seen online made it seem like pig paradise—no part of me imagined that Pig Island was a “managed” tourist attraction where the pigs were culled. But suddenly everything made sense.

How else would the number of pigs on this little beach remain in check over the course of decades? I realized that this is an animal tourist attraction not a whole lot different from the orcas imprisoned at SeaWorld or the orangutans at a zoo. The pigs are collectively managed by the locals, and used for profit. Local guides, Caribbean boat tour companies, and nearby resorts are all profiting from travelers who would give anything—and pay anything—to swim and snap a selfie with the Bahamian pigs.

Tourist Safety Was Certainly An Issue

If this doesn’t bother you, consider the safety of the tourists. While I was in the Bahamas for just one week, I heard several first-hand stories from tourists who were bitten by the pigs. One young man was bitten in the butt when he turned away from the pigs while holding food. Even I was bitten when one of the pigs lunged to grab something out of my hand and accidentally caught my finger at the same time in her powerful jaws.

I asked Susie from Farm Sanctuary about this, wondering what safety concerns people should be aware of when interacting with these hungry, feral-domestic hybrid pigs. She said:

“Pig bites can be pretty serious. Pigs have strong jaws and can have a very crushing, bone breaking bite. They also often break skin. They can do serious damage.”

Despite this, most of the tourists I talked with were not aware of any safety precautions they should take when interacting with the pigs. And the things I saw tourists do for the sake of a selfie photo were cringeworthy. It’s amazing there are not already more serious stories circling about serious injuries at Pig Island… but it’s only a matter of time.

So even if you’re not concerned about the wellbeing of the pigs on this island, consider the tourists who come every year to snap a photo with the famous swimming pigs, completely aware of how to interact with pigs and the risk involved.

To sum it up, here are the problems I learned about during my time at Pig Beach:

Bottom line—the pigs are not living out long lives of freedom on a deserted island in the Bahamas. Sure, it’s better than a factory farm, but Pig Island is no paradise for pigs.

Note: There are now several islands in the Bahamas where individuals and tour companies have brought pigs to create additional swimming pig attractions. They all have different degrees of care and oversight. 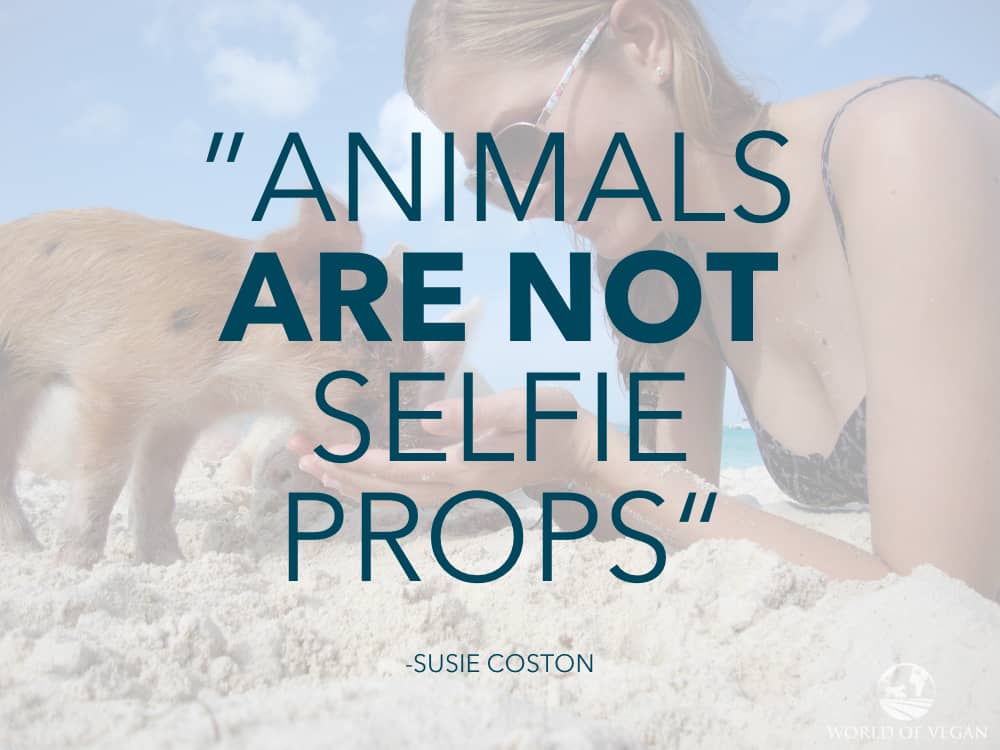 Is Pig Island All Bad?

At this point, you might be thinking, “What’s she so worked up about? At least they’re not locked up on a factory farm!” And that’s a fair point. Life for most pigs in today’s world is heartbreaking, to say the least. Most pigs in existence today are suffering factory farms living a horrendously torturous and sad life. But is that an excuse to lower our standards of care and compassion for the species? Absolutely not.

Of course, it is worth noting that Pig Island has brought incredible positive press for pigs, showing that they are smart, curious, playful, lovable animals not unlike the dogs and cats we adore at home. Presumably, these pigs have inspired countless people to leave pork and bacon of their plate—which is wonderful.

But we don’t need to continue to spread a false story of happiness at the expense of these pigs—especially when there are pigs like Esther the Wonder Pig who is a real-life example of a truly happy, healthy, beloved pig.

There are plenty of other reasons to visit the Bahamas—the beaches are beautiful, and you can enjoy activities like snorkeling, paddle boarding, island hopping, and even swimming near wild sharks. The locals are incredibly friendly and kind, and it really is a beautiful place.

One Bahamian wrote in sharing the following:

The Bahamas recently outlawed the fishing of sea turtles and was declared a shark sanctuary, protecting sharks from commercial fishing. In 1958 The Exuma Cays Land and Sea Park was the first national park of its kind to have both a land and sea component. The 176 square mile park is a ‘no-take’ park where nothing within its boundaries can be removed. Other beautiful, endangered animals like the Flamingo, the Bahama parrot and Rock iguanas are also fully protected and areas of their natural habitat have been set aside and declared as sanctuaries for them. These sanctuaries are The Bahamas National Parks. The parks are speckled throughout the islands and are open to the public so people may witness these animals in their natural habitat. You might have been in search of a pig sanctuary, but the whole time you were sailing past a world of sanctuaries waiting for you to discover them.

What Can You Do to Help the Swimming Pigs?

Despite all these problems, Pig Beach has seen a recent surge in popularity, with tourists visiting from all around the world. While I was there, there was a group who had traveled all the way from Japan to the Bahamas for just one day, just to see the pigs. That’s where you come in.

Please help spread the word to let people know that Pig Island is no paradise for the pigs, but rather a tourist attraction not a whole lot different from Sea World or the Zoo. Instead of planning a trip to visit the swimming pigs, plan a trip to an animal sanctuary like Farm Sanctuary or Animal Place! There are hundreds of sanctuaries all around the world where you can visit pigs, rub their bellies, and support liberation rather than exploitation.

We can also put pressure on the government, tour companies, and local resorts to do better. There is currently no oversight or transparency. We really need to act now to stop this problem from growing (and spreading to more islands), and also urge the government and tour companies to at the very least neuter the male pigs, provide sturdy shelter to protect them from the storms, and assign someone to look out for their care and wellbeing (food, water, sun protection, veterinary care, etc). 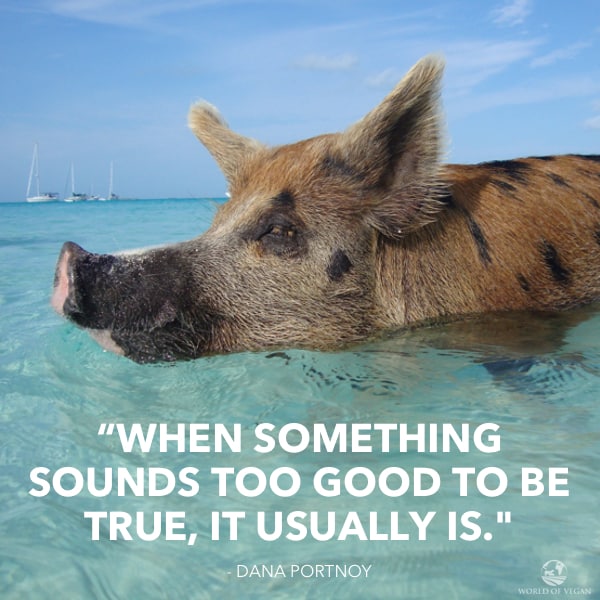 There are so many wonderful places to travel and summer vacation activities to participate in without exploiting animals. Instead of visiting pig beach, how about one of these vegan-friendly travel destinations? Consider a trip to London, or Spain, or Paris, which all have vibrant vegan scenes! Or you could book a getaway to an all vegan resort like The Stanford Inn By The Sea in Northern California.

The sky is the limit—and I promise that when you’re visiting a place that you know is not doing harm you’ll have a much better time.

Have you ever had lentil bolognese? If you're look

What could possibly be wrong with #wool? Sheep nee

Eat all the colors of the rainbow! 🌈 Check out

Have you tried this #vegan fettuccini Alfredo yet?