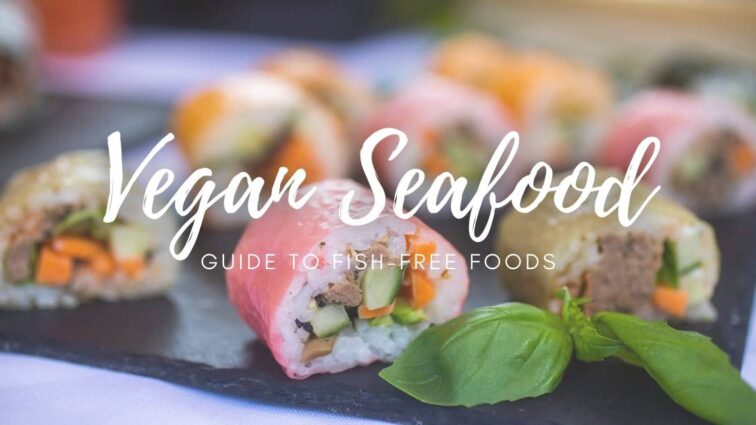 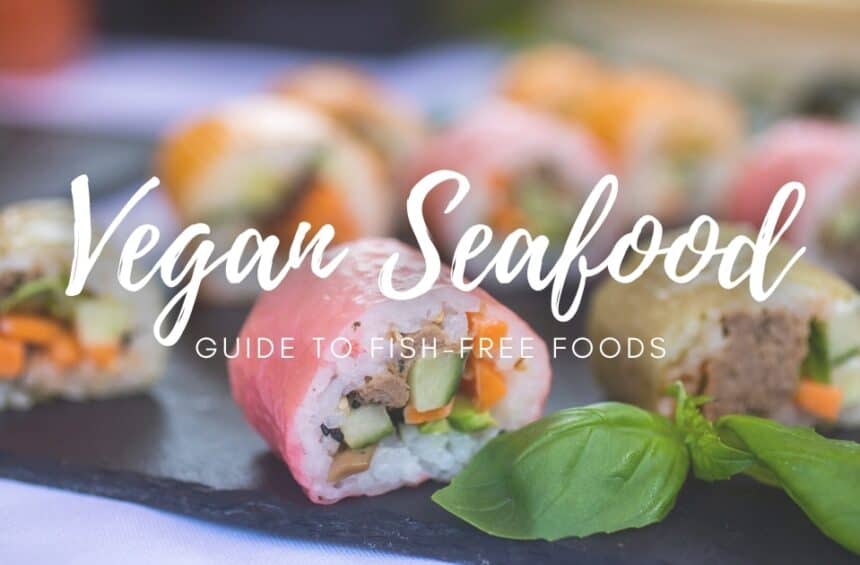 For many of us, the transition to going fully vegan is a gradual one—it’s not always overnight. Many vegans today went pescatarian first, then moved on to vegetarian, and finally made the jump to vegan. That’s why having a plethora of vegan seafood options today is so amazing!

Whether you’re taking it slow and want the chance to move from pescatarian to vegetarian seamlessly, or you’re a long-time vegan hungry for nostalgic flavors from the sea, this guide is for you. We’ll walk you through the many options that exist today for seafood lovers, thanks to the recent explosion of fish-less vegan options.

Let’s get this vegan seafood party started with a round-up of the most popular and widely available brands that offer veganized versions of favorites like: tuna, shrimp, salmon, lox, fish fillets, crab cakes, fish fingers, and even caviar! Let’s dive in (all puns intended).

Created by celebrated vegan chefs Derek Sarno and Chad Sarno, this brand has paved the way for vegan seafood. Realizing that tuna is a huge favorite, they launched their vegan tuna pouches in three different flavors: Naked in Water, Mediterranean, and Oil and Herbs. Good news for us! They have since launched a line of frozen entrees and appetizers which includes: vegan fish burgers, vegan crab cakes, and vegan fish cakes!

These are the real deal. If you have tried the breaded vegan version of shrimps then this is a different story. The resemblance is amazing and the texture is pretty perfect. Did anyone say vegan shrimp tacos?

This brand has many amazing products but we have to give a shout out to their vegan smoked salmon, which is pretty and perfect for a vegan cream cheese bagel, and their crispy golden breaded vegan shrimp, which are best enjoyed with a squeeze of lemon.

This pioneering brand makes fish fillets that are incredibly good and similar to the original version. They’re crunchy and perfect for an indulgent family treat. They have plant-based crab cakes too!

This vegetarian/vegan giant offers very affordable fish-free options. The options, which vary by country, include: battered fish fillets, breaded fish fillets, and some adorable little fish fingers for the kids (or kids at heart!). Quorn originated in the UK but is now sold in 14 countries around the world.

Now, if you thought you’d seen it all, then get ready to be amazed. This brand has managed to emulate caviar only with plant-based ingredients. So get those fancy water crackers ready to get fancy with this artistic vegan caviar. They have four different variations and each of them goes with different vegan foods. Fancy, much?

This beloved brand has a huge range of meat replacement products. From taco fillings to chorizo and canned sausages to an actual can of vegan tuna. Cool, right? Tuno, as they decided to call it, resembles the canned tuna so much you’d have to read the label a few times (although it’s more like tuna chunks). Plus the idea of opening a can of plant-based tuna to prepare your vegan tuna salad is beyond amazing.

This amazing brand is all about unique and revolutionary plant-based seafood, with tastes and textures that perfectly mimic their fishy counterparts. Vegan Zeastar products are mind-bogglingly realistic and ocean-friendly. Think sashimi no tuna, sashimi zalmon, shrimpz, kalamariz, tasty cod, and more!

Another UK-based brand with a range of chilled vegan meat alternative products. Among those are their fish fillets. If you’re looking for a quick vegan fish fillets fix, these would be a great option. They also have a range of chicken-related products and even shawarma.

This brand goes way back! The founder is none other than Linda McCartney (Paul McCartney’s late wife), and she was a pioneer when it comes to animal rights and the vegan lifestyle. This brand has a huge range of vegetarian and vegan products (from sausages and burgers to meat pies) but they have recently launched three sea-themed products.

Vegan goddess Miyoko Schinner brought to life the first mainstream vegan lox cream cheese called “Un-Lox Your Dreams.” This schmear is perfect atop bagels, is a beautiful lox-shade of pink, and tastes smoky and, as Miyoko describes, “seafood-y without the fish.”

Seaweed is the ultimate vegan seafood. Think of it as a sea vegetable! It’s filled with ocean nutrients and is a good source of iodine, magnesium, and iron, and it’s really versatile in cooking. You can add kelp ribbons to your rice bowls, use it like you would any leafy green, and add a sprinkle of seaweed to chickpeas for an extra ocean-y chickpea tuna. It can also be farmed very sustainably, and even regeneratively! It takes zero fertilizers, fresh water, or soil to grow.

Is Fish Healthy for You?

Many people intentionally include fish in their diet because of perceived health benefits. The usual arguments made in defense of eating fish are based on fish as a source of high-quality protein, iodine, and various vitamins and minerals, including Omega-3.

Some people will point out the relationship between Omega-3 and brain development, or between fatty fish and the reduction in the risk of heart attacks and strokes.

But here’s the happy-catch! Fish is not the only source of Omega-3. It’s also found in chia, walnuts, flax seeds, and more. And your risk of heart attack and stroke can greatly be mitigated by following a wholesome plant-based diet.

There are also many risk factors associated with eating fish.

Cholesterol, Mercury, and PCBs in Seafood

The first is cholesterol. Most fish and seafood will contain certain levels of cholesterol. While it seems broadly accepted that eating fish may help you manage your low-density lipoprotein (i.e., “bad” cholesterol) levels, there are certain foods like shrimp that your doctor may advise you to stay away from if trying to manage these levels. In comparison, plant-based foods contain zero cholesterol.

While there is no absolute consensus as to how much mercury or PCBs in fish and ultimately humans should be considered as dangerous, there is a broad understanding that the accumulation of mercury in the body can be very dangerous. Mercury is a heavy metal that is highly toxic and can impact the nervous system. It can even cause severe neurological symptoms and damage.

What About Fish Oil, DHA, and Omega-3s?

Thanks to decades of marketing campaigns from supplement companies, the idea that we need fatty fish in our diets to achieve optimal health are very deeply imprinted in our brains. But have we ever asked ourselves why?

Well, it turns out that the reason why we are “supposed” to eat fish is because of the specific fats they contain—namely DHA and Omega-3 fatty acids. It’s the good fats we’re after—not the fish itself!

And guess what? We can get these DHA and Omega-3 fatty acids without the need to harm any fish or other sea animals. Instead, we can turn to plant-foods like chia seeds, flaxseeds, pumpkin seeds, walnuts, and many more. You can also get vegan Omega-3 supplements and vegan DHA supplements packed with DHA made from algae! We have an entire article written by a registered dietitian about vegan DHA and how to make sure you’re getting enough. We’ve also compiled many of the best vegan vitamins to cover all your needs.

There’s a general misconception that fish cannot feel pain. This is simply not true. The most recent research all points to the fact that fish are capable of suffering just like mammals and birds.

For quite some time it has been understood that fish have nervous systems that comprehend and respond to pain—despite differences in how the brains and nervous systems of fish have evolved over time in comparison with us. Neurobiologists have demonstrated this in a range of experiments. For example, we can see that fish respond to pain when injected with pain-inducing substances. Similarly, it has been shown that fish have neurotransmitters such as endorphins that work—to the best of our scientific knowledge—to provide pain relief.

These findings are further supported by our understanding of pain as an evolutionary adaptation that helps species to survive.

In a similar context, research increasingly indicates that fish are also capable of feeling fear. This is something we may have witnessed in our companion animals when they’re exposed to an earthquake, fireworks, or being chased. In addition to being able to feel fear, research shows that fish also opt to not feel fear if given the choice.

Fish are not only able to feel pain and fear but also go to great lengths to protect their own lives. There’s no doubt that being jabbed with a sharp hook or suffocating is terrifying and painful to fish.

Choosing plant-based foods instead of seafood will prevent suffering and save lives. There’s no better reason than that!

How Does Eating Seafood Affect The Environment?

Commercial capture fishing, especially when controlled poorly and performed unsustainably (as it so often is), can severely impact the ecosystem. It’s estimated that almost 80% of the world’s fisheries are either fully exploited, over-exploited, depleted, or in a state of collapse.

Worse yet, it’s estimated that 90% of the stocks of large predatory fish, such as sharks, tuna, marlin, and swordfish, have already disappeared. At the current rate, unless we make changes fast, our oceans may be void of fish by as soon as 2048.

These numbers are in stark contrast to the worldwide fishing activities and regulatory responses, as the WWF points out:

But the problem goes beyond the shrinking size or existence of a single species or population. The marine and ultimately earth’s ecosystem is heavily intertwined. The stress on (or disappearance of) a single species can eventually impact other species and even an entire ecosystem.

In addition, catching fish is not just catching fish. Depending on fishing techniques—for example, bottom trawling. Huge amounts of by-catch may be caught together with the targeted fish. This can range from other fish and seafood to turtles, sharks, dolphins, and more. These animals, classified as “by-catch,” are typically discarded afterward, frequently dying in the process.

So when you decide to give up fish, you not only help to save that particular species. You also help save turtles, dolphins, and many other species dearly loved by all.

Leaving sea animals off of your plate is a powerful way to protect our ocean and all the creatures that call it home. Now let’s explore all the fun seafood-inspired plant-based options we can turn to instead!

Vegan Seafood Guide copyright of World of Vegan™, all rights reserved. Please note that this article contains affiliate links. Shopping through them helps support our work at World of Vegan.