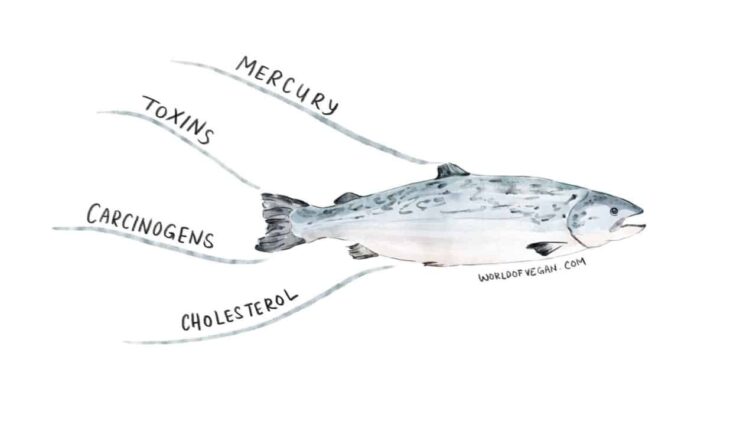 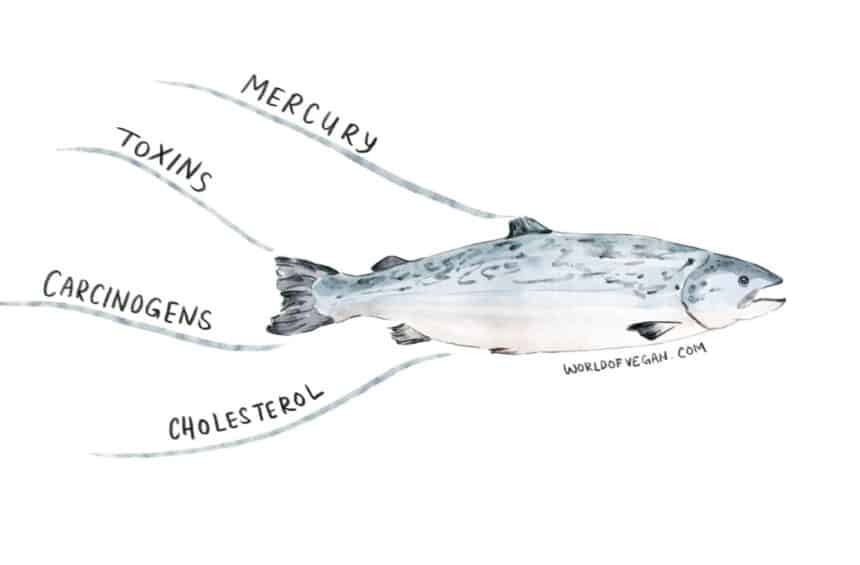 There’s a lot of misinformation about the health impacts of seafood swirling around the internet. It’s time to set the record straight!

I don’t know about you, but when I hear people talk about eating healthy, they tend to go straight for the “lean meat” suggestion. Chicken or fish, they say! But I’ll raise them some plant-based protein any day.

Animal protein has rising costs for us (and our planet), and an ever-growing body of evidence suggests that that meat—even lean meat—is not a healthy protein option. Pick up a copy of the New York Times bestselling book Prevent & Reverse Heart Disease by Dr. Caldwell Esselstyn for more on that.

Today we’re going to focus on one particular type of meat: fish.

What Could Possibly Be Wrong With Fish?

While fish was once praised for its protein and omega-3 fatty acid content, it’s quickly falling from grace. Pregnant women have long been warned about the health-hazard contaminants in fish. But today, from fish raised on farms with horrific conditions to wild fish poisoned by our own plastic pollution problem, seafood has become the opposite of healthy. Not just for pregnant women, but for everyone.

We all want to do what’s best for our bodies, right? Sure, we might down some vegan cupcakes now and again. But in general, we know it’s best to reach for foods that are rich in nutrients and nutritional value, and contain less of the bad stuff (salt, sugar, pesticides, antibiotics, chemicals, microplastics, and beyond).

Fish used to be considered high on the list of healthful foods…but we can give you many critically important reasons why it should be kicked off that list ASAP.

Mercury isn’t Always in Retrograde, But it is in Fish

The U.S. dietary guidelines suggest that people eat up to 12 ounces of seafood per week. But…wait a minute.

A study by the Environmental Working Group reveals that eating 12 ounces of seafood per week could be exposing you to high levels of mercury. Mercury!

Mercury is a neurotoxin that can do serious permanent damage to your body, so any long-term effects resulting from Mercury exposure are…well, they’re not good.

One study even found that 27% of fish tested from 291 U.S. streams contained more mercury than is recommended as safe for us. The dangers of mercury in fish are much higher for pregnant women and children, but ingesting toxic mercury isn’t good for anybody.

Permission to skip the mercury and get right to the good stuff? Granted.

Plastic is everywhere, and it doesn’t break down easily. Also, unfortunately, it looks like a snack to ocean wildlife.

Plastic gets tossed or swept into the ocean, breaks down a bit, collects some algae, and then it smells like the food of choice for marine animals and fish. Not only is this bad news for our health, but it also impacts the biodiversity of the ocean’s ecosystem.

It’s estimated that plastics kill some 100 million marine mammals every single year. A recent study shows that 73% of fish in the Northwest Atlantic Ocean have eaten microplastics, one of the highest rates ever recorded.

Microplastics are tiny pieces of plastic, around 0.2 inches in diameter, that get to oceans or streams through waterways (like our sink) or plastic dumping. Now, up to 8.8 million tons of plastic waste enters the oceans every year. These plastics have been found in beer, honey, and even beef, but the most common source is seafood. And let’s be real, anything full of plastic is not a healthy protein option for you.

Plastics can contain toxins like Phthalates and Bisphenol-A (BPA). These chemicals mess with your hormones. Phthalates have been linked to increased cancer cells and BPA to disrupting reproductive hormones in women.

We try to avoid plastic in our everyday life, so avoiding food sources with plastic also helps avoid those chemicals.

Aquaculture is the Not-So-New Factory Farming, and It’s Super Toxic

Aquaculture, or “fish farming,” provides over 50% of fish products in the United States.

These fish farms are now very large and aren’t the cleanest. They cause many problems for our health and the environment. Fish in these farms are raised on unnatural diets, and in small areas, which leads to diseases that can be passed on to other fish in the farm, and the wild fish nearby.

PCBs and POPs and Dioxins…Oh My!

Another industrial chemical troubling our health is PCBs (polychlorinated biphenys), a type of POP (persistent organic pollutant). The long-term impact of PCBs has been linked to many health problems, including lung problems, difficulties developing, and even cancer.

POP ain’t the way to be, and dioxin is another toxic that proves it.

Dioxin is serious stuff and has been linked to skin lesions, decreased liver function, lowered immune system, and in long-term exposure cases, cancer. Our dioxin contact occurs from animal proteins and dairy over 90% of the time.

Even if we try to limit our contact with it, the fish farms keep it coming. If fish were a healthy protein option, it wouldn’t be anywhere near this stuff.

So we have mercury, plastic, and POPs contaminating fish. But could the benefits of fish outweigh the costs? After all, we need omega-3, and fish has it!

When you choose fish, you expect the healthy fats—omega-3 fatty acids—to be flowing through you. Unfortunately, it turns out fish isn’t even giving enough of the fatty acids you need.

Yes, omega-3 fatty acids are linked to an array of health benefits. But lucky for us (and fish!) there are many plant-based sources of omega-3 that serve up the amount you need without the risk of mercury, antibiotics, and POP exposure.

Good News Though, You Don’t Have To Say Goodbye to the Flavors You Love!

If, like me, you’re now convinced that fish is far from healthy…now what? How are you going to survive without your tuna salad sandwich and crab cakes?

Well, first of all, we have three insanely good vegan tuna salad recipes here at World of Vegan that you can make from scratch using basic ingredients like chickpeas and jackfruit.

But lucky for us, we don’t have to limit ourselves to substituting beans or fruit for meat to get our fish fix. Healthy plant-based protein options are booming, and seafood without the sacrifice has become a reality.

These brands have created innovative and delicious plant-based seafood options that will make you think they’re fresh from the sea (without the mercury, plastic, PCBs, and dioxin, of course!).

The plant-based seafood sector is growing fast, with several new companies stepping into the playing field. The new kid on the block right now is Good Catch. Keep an eye out for their chef-crafted tuna and other products. They’re transforming the seafood landscape, fast!

You know what they say:

Actually, if you really want to do that man a solid, give him some fish-free protein (like this vegan tuna) instead!

Article and cover photo artwork copyright of World of Vegan. Please note that this article contains affiliate links, and shopping through them supports our work here at World of Vegan!