5 from 10 votes
This vegan pozole is incredibly flavorful, full of fresh and wholesome ingredients, making this Mexican soup both healthy and delicious! It's also surprisingly quick to prepare so you can enjoy this soup even on busy nights! 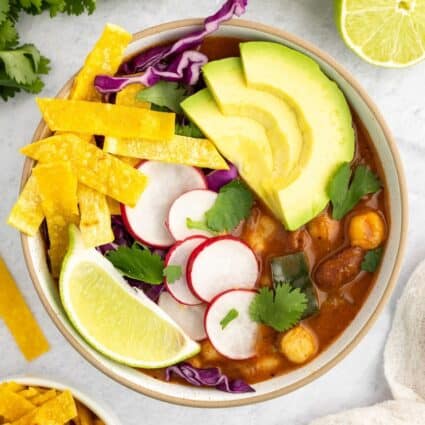 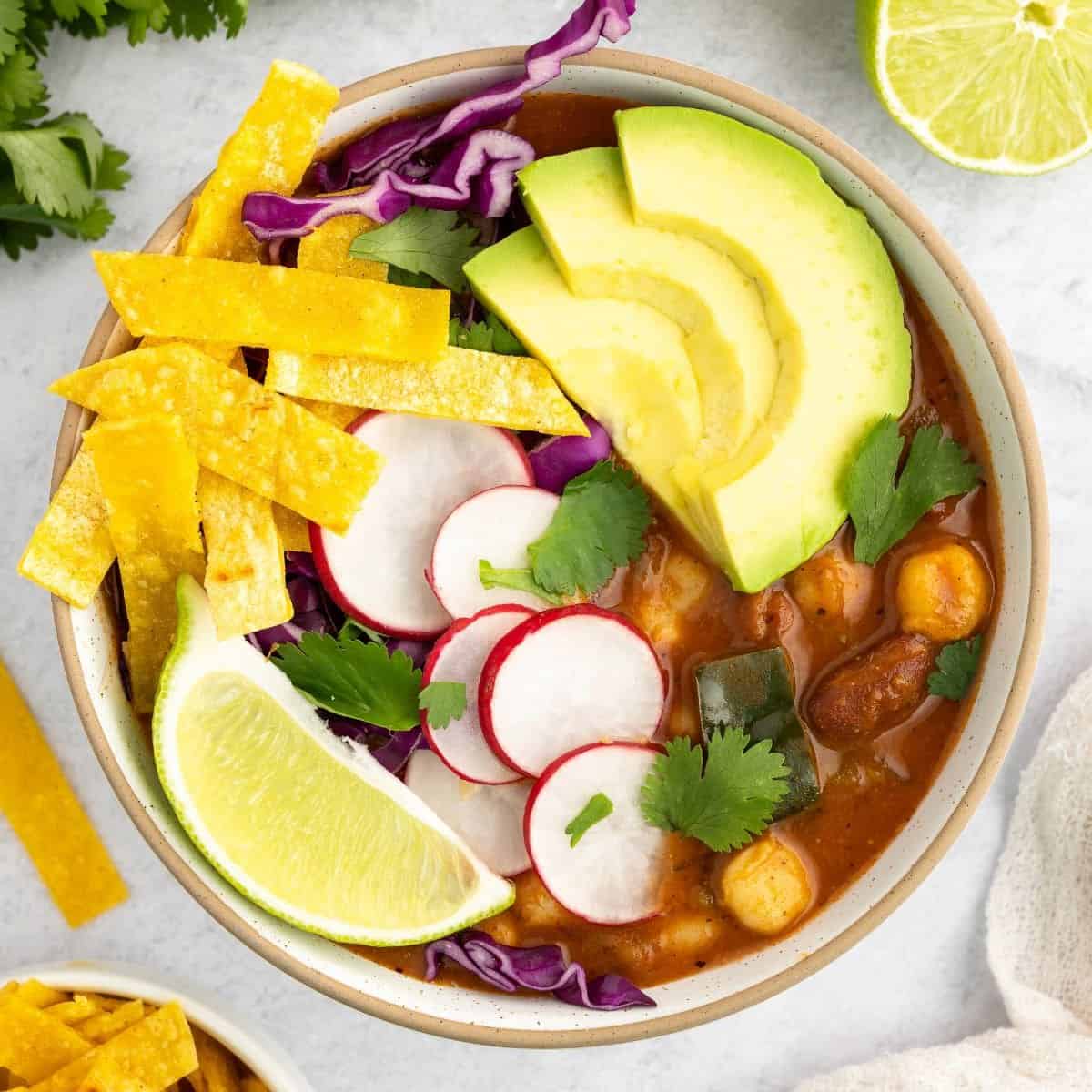 If anyone tells you they don’t like Mexican food, would you even believe them? It would be hard, wouldn’t it? Mexican food is a world favorite! Simple, fresh, and wholesome ingredients turned into the most delicious recipes.

I’m sure many famous recipes come to mind when we think about this amazing cuisine, but soup is not necessarily one of them, right? Well, I’m sure once you try this new recipe, it won’t be easily forgotten. It’s a spicy vegan pozole full of flavorful and fresh ingredients.

This recipe from the 30-Minute Vegan Dinners cookbook carries all those signature Mexican flavors we love like tomatoes (what would Mexican food be without those intense red and sweet tomatoes!), poblano peppers, chilies, kidney beans, cilantro and, of course, avocado. I promise you this soup has it all! The sweet, the spicy, the fresh, and the creaminess. Are you excited to try this vegan pozole yet? I know I am!

Pozole, pronounced po-so-lay, is a Mexican soup or stew made with hominy and typically meat in a white, red or green broth, known as pozole blanco, pozole rojo and pozole verde, respectively. To make it vegan, it’s easy to substitute the meat with beans. In this vegan pozole we’re using kidney beans.

Pozole is garnished with a variety of fresh toppings including shredded cabbage or lettuce, sliced radishes, red onion, garlic, chile peppers, limes, and cilantro. You won’t want to leave out toppings, they’re what makes this dish fresh and delicious with lots of texture and flavor!

It’s quite possible you’ve never heard of hominy. Well, you can learn something new every day, right? Hominy is basically whole dried kernels of corn that have been soaked in a special alkaline solution. This soaking not only enhances the corn nutritional value but it also makes it easier to digest as the skin gets loose (this is what they do to before grinding the corn to make those yummy tortillas later!)

So how do you cook it? Well, the cooking process is very similar to beans. You soak them overnight (with a mix of water and calcium hydroxide) and then cook them for a few hours or less if you do cook them in a pressure cooker. But I’m sure you’ll be very happy to know that you really don’t have to go through this and you can jump ahead and buy the ones in a can and ready to cook with! Pheew, right?

Don’t have hominy or can’t find it anywhere? No worries! You can use 1 cup of frozen corn and 1 can of chickpeas instead! It will taste amazing!

When Is The Best Time To Enjoy Pozole?

We usually associate soup with fall and winter, with cold days and cozying up inside, right? Well, this soup is a bit different. It’s one of those soups that can be enjoyed any time of the year. Is there such a thing as a summer soup? Well, if there isn’t then this pozole could be it!

Ok, I get that in a hot summer day no one wants to be indoors cooking up a steamy hot soup, but this recipe will be worth the effort. First of all, it only takes 30 minutes so don’t stress over the idea of having to stand and stir for a long period of time. It will be quick and easy!

If you wanna skip the steaming and the deseeding of the peppers you could use some store bought ones and save yourself even more time! Wanna make it even quicker? Buy some packaged baked tortilla chips and crumble them on top instead of frying your own.

When it comes to pozole, it’s all about the toppings! You don’t need to have all of these but the more options the better!

How To Make This Vegan Pozole

Here’s a quick step-by-step tutorial to show the process of making this vegan pozole. It may seem like a lot of steps but it’s really just adding everything to one pot and letting it simmer. You can also find these steps in the printable recipe card below.

1. Start by removing the stem and seeds from the peppers and cut into 1-inch pieces.

2. Heat the oil in a medium soup pot over medium heat and add the onions and peppers.

3. Cook for 1 to 2 minutes until softened. Add the garlic, flour, and chili powder and stir well to combine.

Add the cumin, oregano, bay leaf, cayenne, and salt and cook for an additional 1 to 2 minutes.

4. Add the tomato paste, chiles, and 1 cup of broth to the pot to dissolve the tomato paste. Stir well to combine. Then add the kidney beans, hominy, and remaining broth. Reduce the heat to medium and bring the soup to a rolling boil for 10 minutes or so, or until the peppers have softened. Taste then add another pinch of salt and cayenne, if desired.

5. While it’s simmering, prep your toppings. Chop the cilantro and avocados. Slice the radishes and cabbage. Cut the tortillas into thin strips. Toast the tortilla strips in a small oiled pan over medium-high heat until crispy and golden brown.

6. When the vegan pozole is ready, remove the bay leaf and serve with avocado, cilantro, radish, cabbage, tortillas strips, and a squeeze of fresh lime.

Leftover pozole is best stored in an airtight container in the refrigerator for up to a week. Store toppings separately.

For longer storage, allow to cool to room temperature, then place in a freezer-safe container, with a little space left at the top for expansion. Freeze for up to three months.

This vegan pozole is great on its own but can but served alongside many dishes to make it a hearty meal!

If you’re feeling extra hungry, serve it with these Vegan Cheese Quesadillas, Vegan Mollete with Chickpea Chorizo, or some Jackfruit “Pulled Pork” Tostadas.

5 from 10 votes
The next time you’re sick and need a warm, comforting soup, give this quick pozole recipe a try! It’s a spicy Mexican soup made with hominy—delightfully plump, chewy corn kernels that have a mild nutty flavor. Hominy is sold in most grocery stores, but if you aren’t able to find it see Fresh Tips! below.

This book is such a great addition to your vegan cookbook shelf! Full of delicious and quick (obviously! 30 minutes or less!) recipes that are golden for those weekdays when you don’t have time to think about what to make and even less time to prepare it. Still, the recipes have fun twists and use super fun ingredients so you won’t be bored with another simple recipe of vegan mac & cheese!

Megan Saad, the author, is a passionate chef and photographer behind the resourceful blog “Carrots & Flowers” which also has a great facebook page full of dynamic recipe videos aiming to inspire those who feel overwhelmed by cooking vegan meals from scratch.

Megan has made it her mission to help others transition into the plant-based lifestyle with ease and success. Go grab your copy of her book “30-minute vegan meals” here!