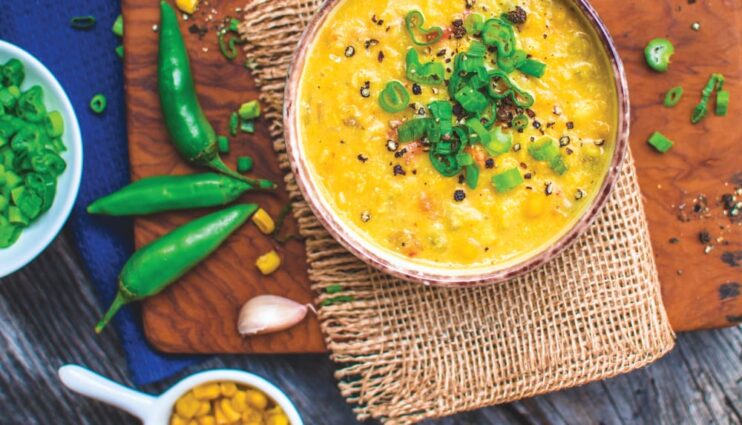 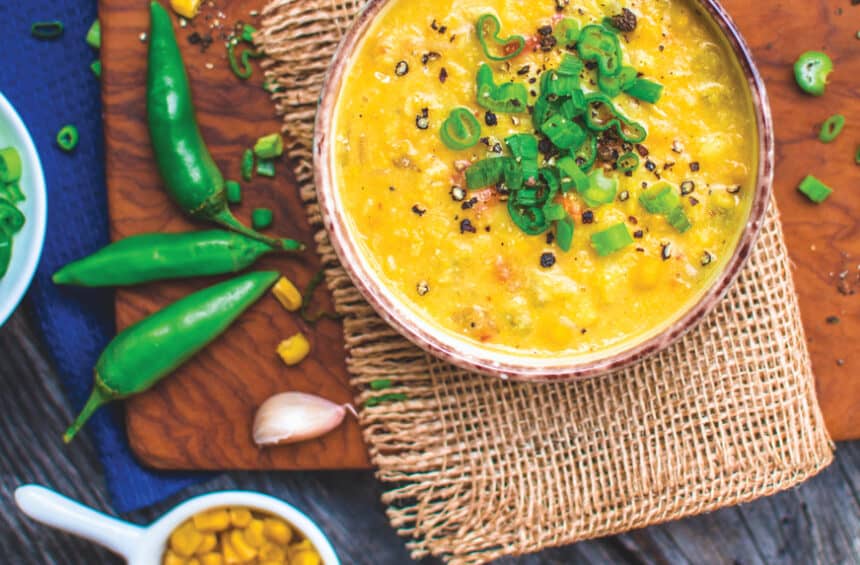 Wrapping your chilly hands around a hot bowl of this vegan corn chowder is like holding sunshine. The brilliant yellow color excites your eyes as your spoon dips into this creamy, nutrient-packed soup speckled with little bits of corn, potatoes, bell pepper, onion, and celery. Your first bite begins to warm you from the inside out. Soup perfection.

This vegan corn chowder recipe comes from my cookbook, The Friendly Vegan Cookbook. While it’s an absolute fall favorite, it can be enjoyed any time of year, as it comes together perfectly with frozen corn.

We made this chowder flavorful by using onion, garlic, jalapeño, and flavorful vegetable broth, and we made it creamy using plant-based milk and pureed potatoes. Unlike most corn chowder recipes, our calls for zero cream or butter, making this recipe extra healthy while still being just as delicious. 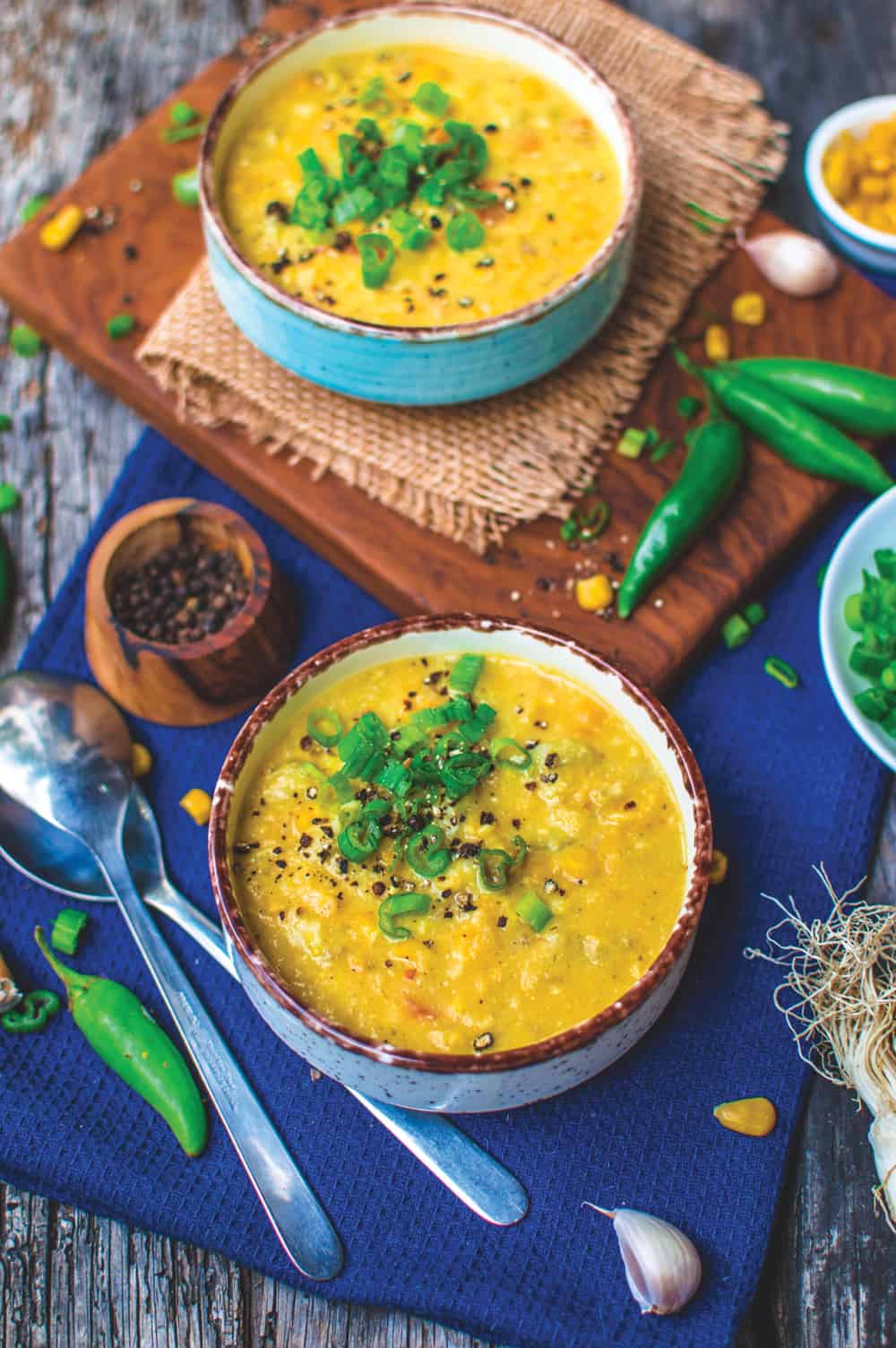 Soup Base: Vegan Broth or Bouillon?

I’m a big fan of using bouillon and have transitioned away from pre-made vegetable broth almost entirely. Let me explain why.

Any soup broth that you buy at the store will come housed in a container, usually a plastic or aseptic container, which is usually not even recyclable. That’s a lot of single-use waste for something that’s 95% water. And that’s where the beauty of bouillon comes in.

Bouillon is essentially condensed soup stock without the water. You can find it in little individually wrapped cubes (like this) or in glass jars (like this). Better Than Bouillon is my personal favorite.

Just add the bouillon to boiling water and voila! You’ve got vegetable broth that works perfectly with any recipe. And save those glass Better Than Bouillon jars—you can reuse them for leftover sauces, dry spices, homemade baby food, and more!

You can use any type of corn in this recipe—fresh corn, canned corn, or frozen corn kernels! We personally like to use frozen corn because it’s already removed from the cob and is super-easy to toss in. Plus, frozen produce is usually picked, harvested, prepared, and frozen at the peak point of ripeness, creating very highest quality produce that’s perfect to cook with.

I’ll be honest, I rarely have leftovers when I make this chowder because my family goes to town when we make this. But when we don’t devour every last bite, it stores beautifully. This vegan chowder recipe is a great one to save—either in the fridge to enjoy throughout the week, or in the freezer to enjoy in the future.

To freeze your leftovers, just ladle portions into glass containers (I love using single-serving containers), secure the lids, and pop them in the freezer. When you’re ready to enjoy more soup, just allow them to thaw in the refrigerator overnight before reheating them in the microwave the next day. You can also microwave them from their frozen state, but it will take longer and require some mixing along the way.

Don’t miss our round-up of the best vegan soup recipes from all around the web! Here are a few of our top favorites:

5 from 17 votes
We can't sing the praises of this vegan corn chowder enough. It's creamy yet chunky, and sings with the fresh flavor of corn. We've already had friends begging us for this recipe, and lucky for them—and you—it's really easy to make. If corn's not in season, don't worry—the frozen variety works just as well. 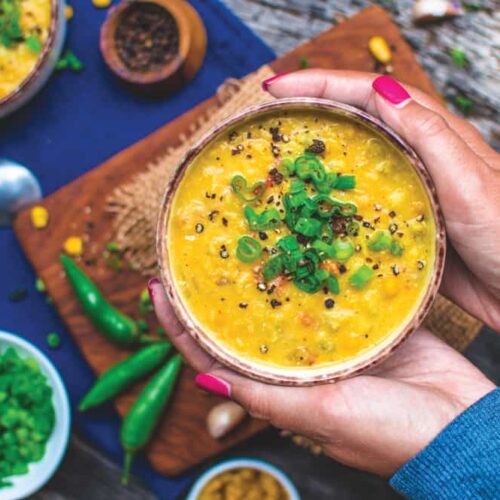 Friendly Suggestion: If you have extra frozen corn kernels, toss them in the soup after blending.

This is just one of our 100 perfected vegan recipes that you’ll find in my new book, The Friendly Vegan Cookbook! I wrote this cookbook with Toni Okamoto, founder of Plant-Based on a Budget, to be the ultimate vegan cookbook for anyone who wants to integrate more plant-based meals into their life, and find rigorously tested versions of favorite dishes. I hope to continue supporting you in your kitchen through this book!

By the way…if you do get this cookbook, this corn chowder pairs beautifully with our vegan cornbread recipe from The Friendly Vegan Cookbook! 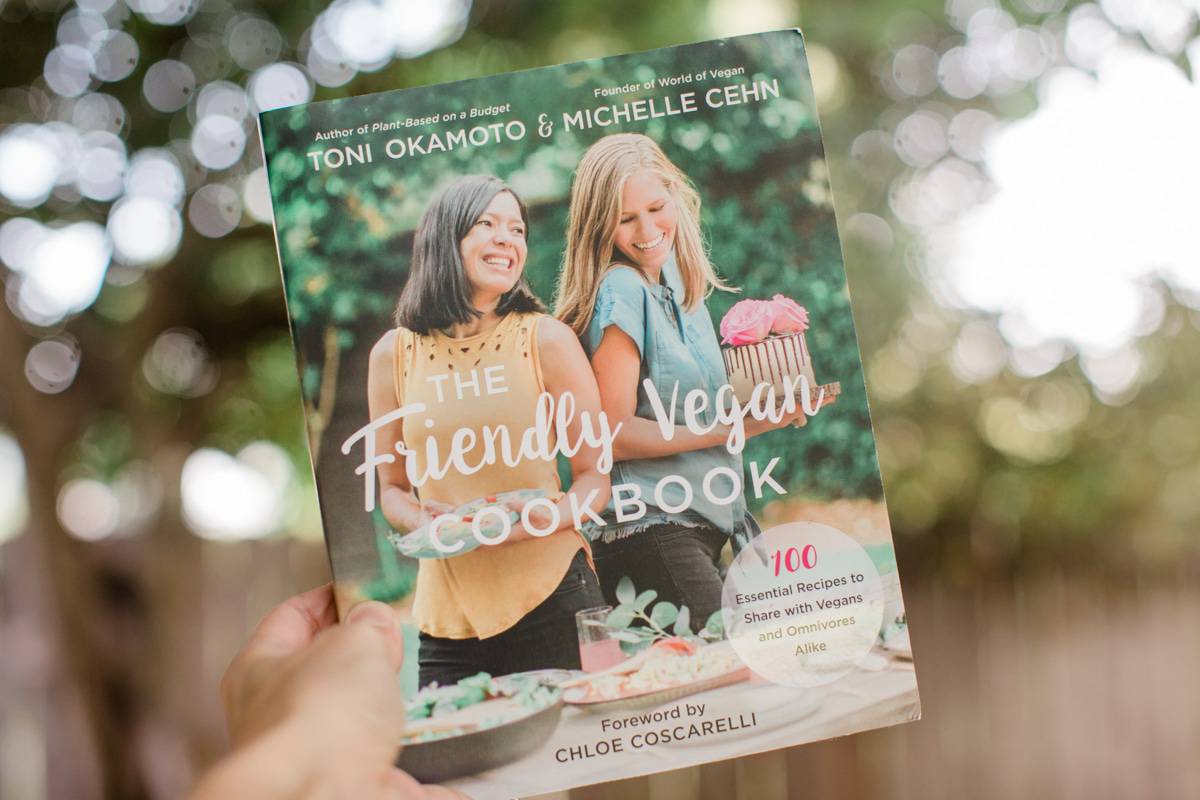 Hungry for more corn-inspired dishes? Check out these delicious recipes!

This creamy vegan corn chowder recipe is from The Friendly Vegan Cookbook by Michelle Cehn and Toni Okamoto. Photos by Zhoro Apostolov. Published with permission from BenBella Books, 2020, all rights reserved. Please note that this article contains affiliate links.