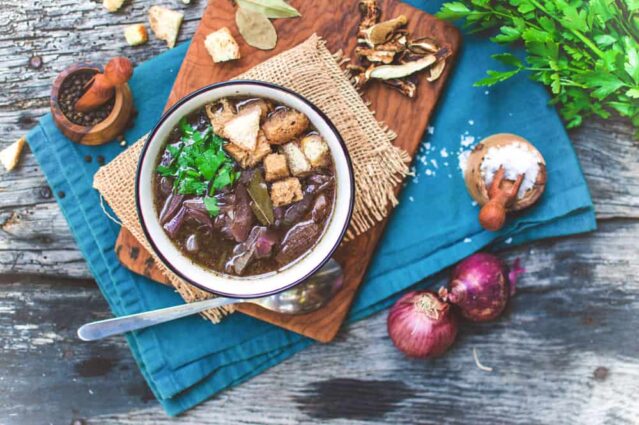 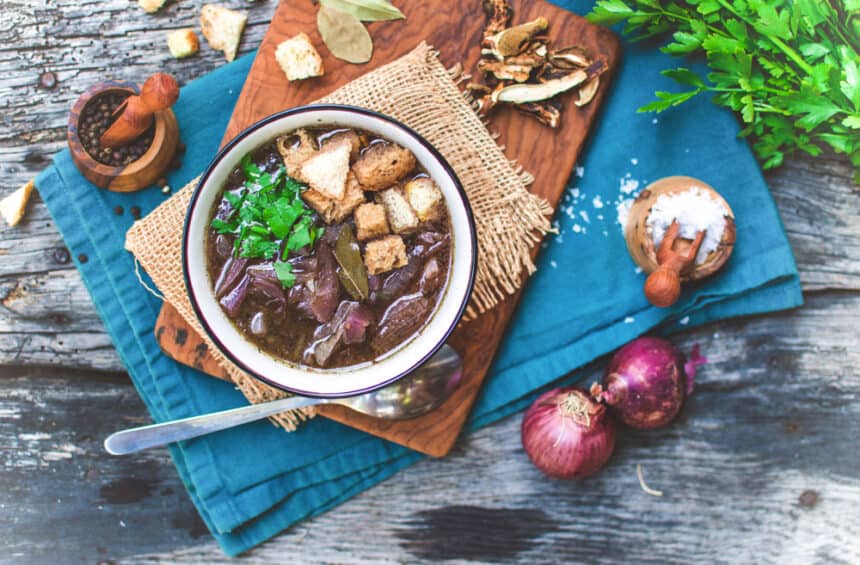 If you’ve been dreaming about roaming the streets of Paris then we might have something to get you into the mood even more! Is there anything more French than onion soup? This classic Vegan French Onion Soup recipe is such a symbol of comfort and French joie de vivre (or the joy of living). Ready to learn the ropes?

If you’re familiar with the classic recipe then you must be aware it usually contains so much cheese and sometimes even cream. It’s a very heavy soup. But this vegan french onion soup recipe goes back to the roots and puts the onion in the spotlight again. You know, before the dairy cheese took over.

If in your eyes, french onion soup just isn’t complete without the melted cheese on top, don’t worry. You can always add some vegan cheese slices on top and broil it for a minute or two to recreate that more decadent feel.

We are on the constant quest for super easy and money-saving recipes! Along this quest, we have realized that soups are the ultimate budget-friendly food, not to mention time-saving. But wait…you also prepare it in one pot!

This soup, in particular, is so easy and affordable to make. Onions are one of the cheapest vegetables and probably one of the most long-lasting ones too! You can score a big bunch of onions for just a few dollars and they will last for weeks if you store them in a dark and dry cupboard. Onions for the win! 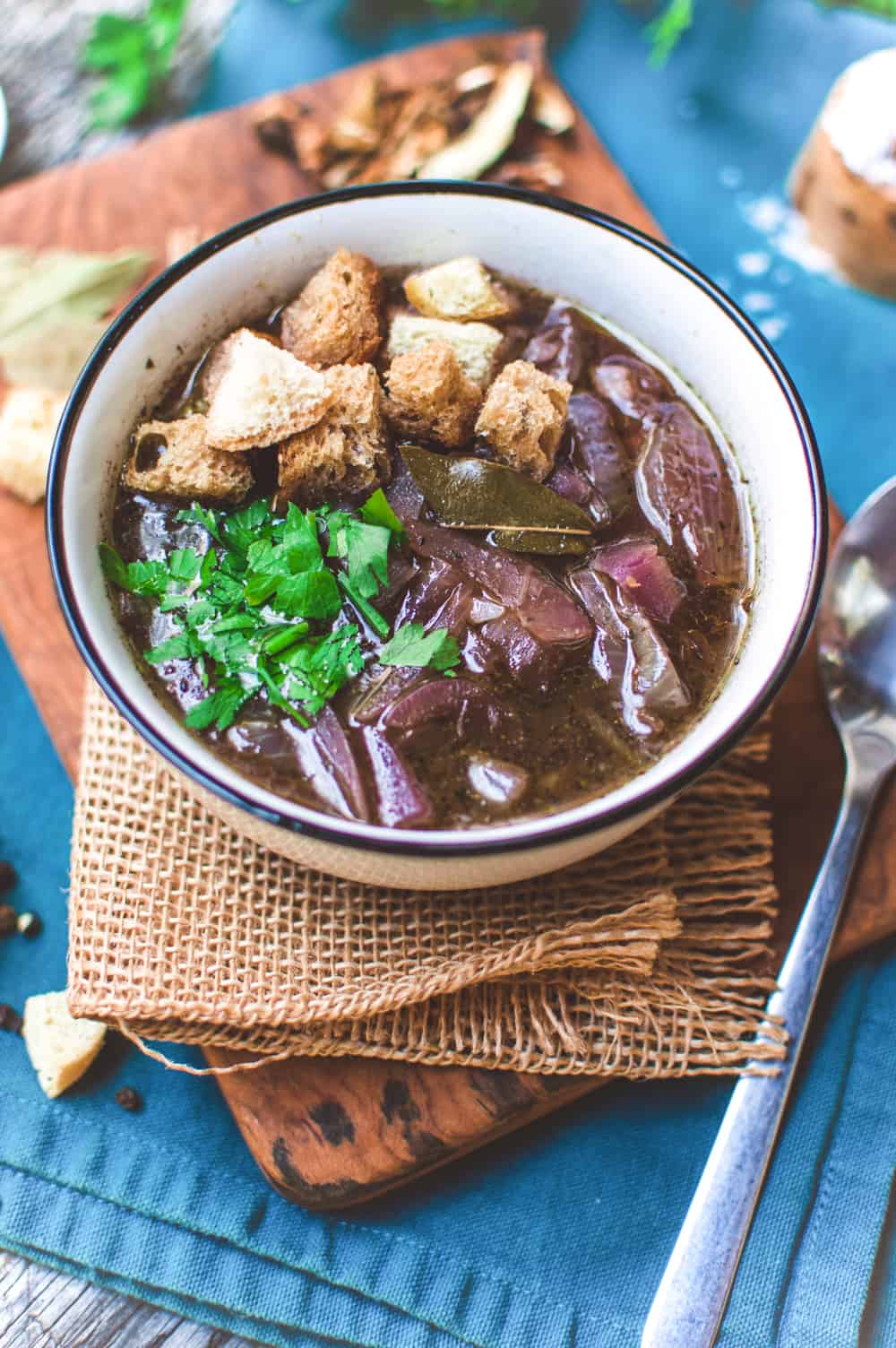 5 from 6 votes
Warm up this season with some delicious vegan french onion soup. This soup is scrumptious as is, but if you have a slice of vegan cheese on hand feel free to melt it on top of the soup for that classic French Onion flair. Just pop it on top of an oven-friendly bowl of the soup and broil for 1-2 minutes until the cheese melts. Yum! 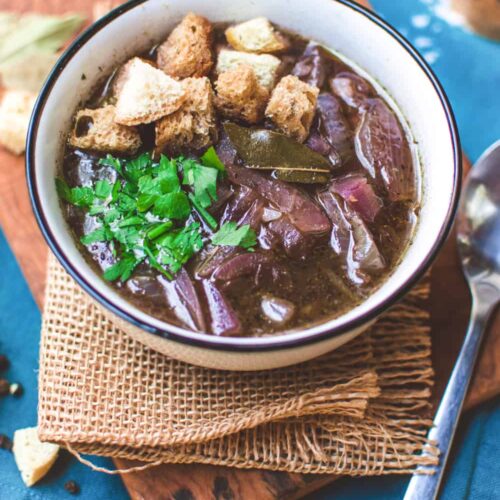 Want to add melted cheese on top, like classic french onion soup? Serve in an oven-proof bowl, top with your favorite vegan cheese slices, and broil for a minute or two just until cheese melts.

This soup is full of goodness. The light consistency and the veggie broth make it such a great option for those days when we are feeling under the weather. A bit like the typical chicken soup we use to have as children but without the saturated fats and cruelty. A much kinder way to heal and find comfort when we need to recover.

Another amazing way to make this soup even more healthy and nutritious is by adding any veggie you like or have on hand. Some chopped carrots or celery would be great!

Same with the toppings. You can go crazy with toppings! From the classic croutons to some more fancy ones like hemp seeds. But we can’t forget the best topping of all, nutritional yeast! It just makes everything better!

In any soup recipe that calls for vegetable broth—this one included—you can always use vegetable bouillon and the equivalent amount of water instead. We’re big fans of bouillon because it is often shelf-stable, and it’s packaged without water so it’s a much more eco-friendly alternative to packaged broths (which are usually in tetra packs that aren’t recyclable). There are tons of varieties of vegan bouillon out there that comes in foil-wrapped cubes and little glass containers. Better Than Bouillon is one of our favorite brands!

If you are keen on making this recipe taste more cheezy but don’t want to add the heaviness of vegan cream or vegan cheese, then (like we mentioned above) nutritional yeast is your best friend! It will give it a delicious cheesy flavor and add even more nutrients If you wanna score some extra points then get the variety with added Vitamin B12.

So are you as excited as I am to prepare this vegan onion soup? I’m convinced you’ll feel comforted and happier after you’ve eaten it. Enjoy and slurp away! The French way.

Excited To Make More Budget-Friendly Soups? Check Out These!

Vegan French Onion Soup photos and recipe by Zhoro Apostolov for World of Vegan. Recipe and photographs copyright of World of Vegan™, all rights reserved. Please note that this article contains affiliate links, which means shopping through them helps lights on at World of Vegan. Thanks so much, and happy cooking!