You Are Here: Home → Guide to Vegan Deodorants That Actually Work 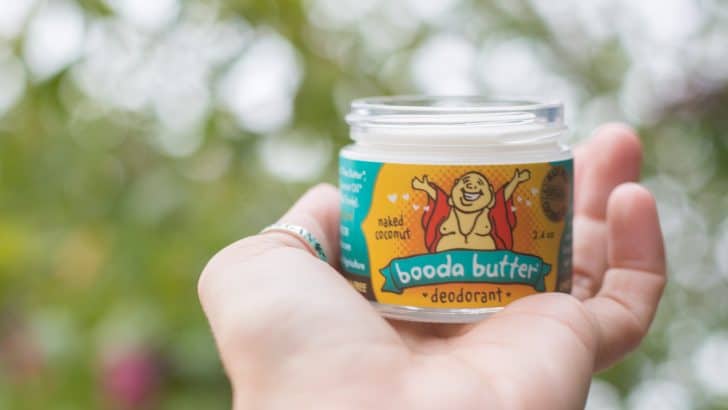 Once you’ve got the vegan food thing down, you may start looking at other parts of your life that aren’t quite aligned. There’s our clothing (goodbye leather and wool), our beauty products (think: red lipstick colored with smashed bugs), and our body care products (like deodorant that has been tested on animals). Today we’re tackling vegan deodorant!

The last thing any of us wants to do it walk about the world with an unpleasant stank wafting around us. So today we’re sharing the best cruelty-free and vegan deodorants out there today.

I’ve been vegan for more than a decade now, and it wasn’t until a few years ago that I really got the deodorant thing down. It can be a little challenging—first because many of the options out there simply don’t work—and second because what works for one person may not work for another. We each have a unique body chemistry so finding a vegan deodorant that works for you may take some trial and error.

That said—I’ve tried a lot of vegan deodorants. I’ve also talked to friends, fellow bloggers, and companies to get a sense of which products I feel the most confident recommending to others. Here are the deodorants that have made the top of my list.

I should also note that these are all deodorants—not antiperspirants. They will prevent smell, not sweat. And for a good reason. Our pits play an important role in our bodies, and when we cake them with aluminum that blocks our pores, we are keeping them from doing their job detoxifying our bodies and beyond.

If you’re switching from a generic brand of deodorant, there will likely be a detox period where it may seem like your new more natural deodorant isn’t working. You should expect to give your pits a chance to acclimate to their newfound freedom, where they can finally breathe and sweat for the first time, perhaps in decades. For me, it took several months, but it’s different for everyone. Don’t give up—it’s worth it. 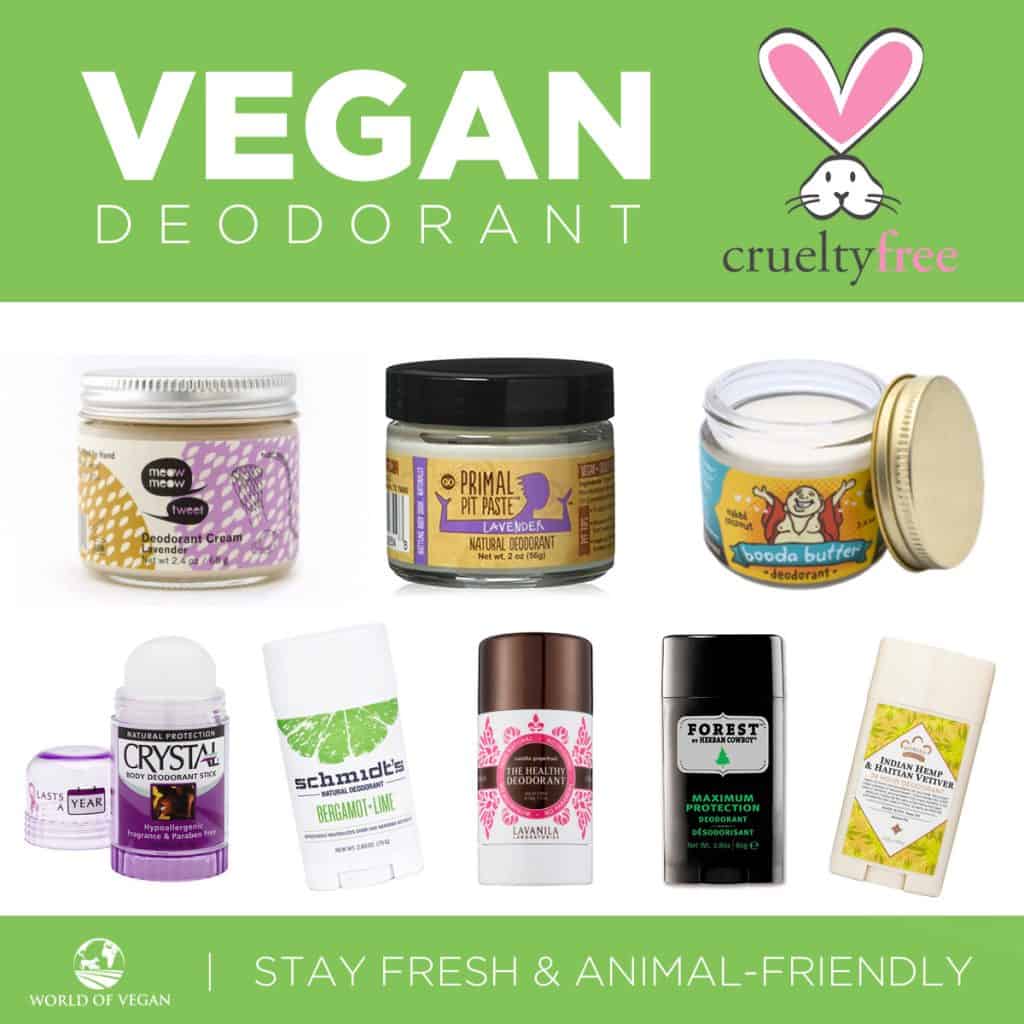 Holy moly. I just recently discovered this deodorant and I’m in love. It’s quickly becoming my favorite. I’ve been wearing it nonstop—and not just on days when I’m lounging around at home. I’ve been turning to this when I’m on-the-go around lots of people and want to feel confident that I’m not gonna stink.

So, if you’ve been looking for a cruelty-free deodorant and you don’t want to leave a distinctly unpleasant waft of odor behind you, give this one a try. The “Sweet Amber” scent is my favorite!

Note: Zion Health also has mini-sized deodorants (pictured below) which are super helpful for travel or tossing in your purse in case you ever need it! 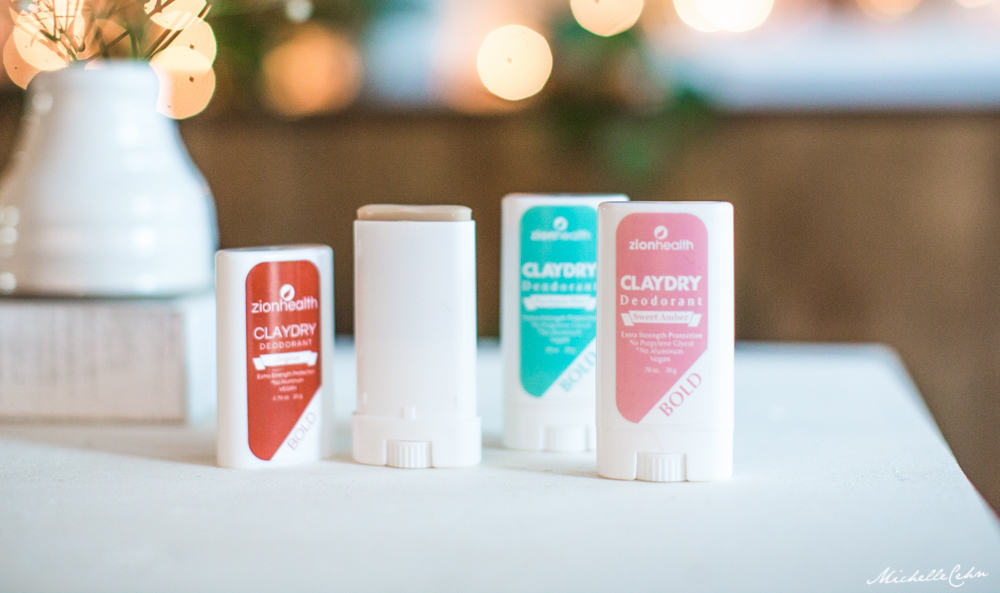 A zero-waste deodorant? Yup—you heard it here first! This deodorant is packaged in fully recyclable cardboard. When I first got my paws on this, I was in awe. Most eco-friendly deodorants come in glass pots (like the one above) that you have to stick your fingers in and smear on your pitties. But Natural Vegan managed to create a zero-waste stick deodorant with incredibly innovative packaging. And it has worked great for me! 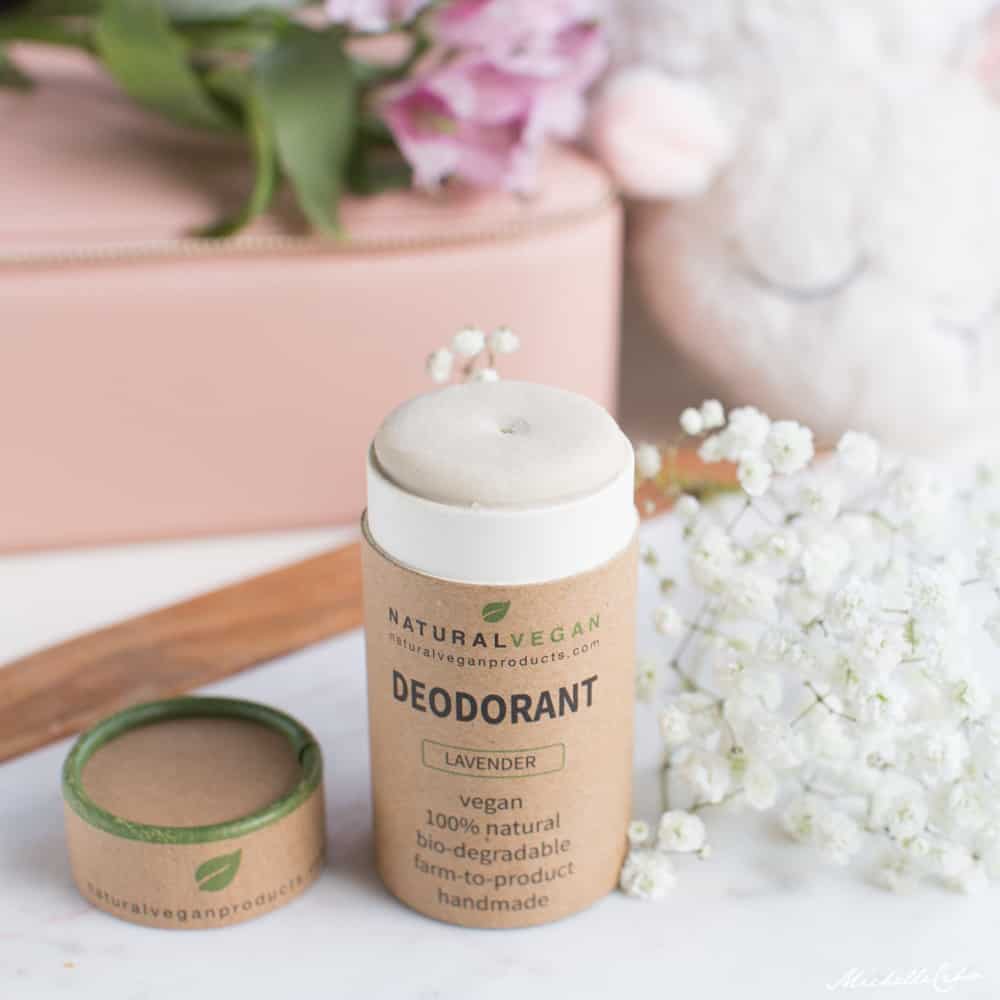 I recently discovered Each & Every and have since fallen in love. It’s a super-smooth formula, easy to apply, and works great (for me, at least)! I’ve gotten many friends to give this a try and have heard great things from them as well. I’ve tried several of their scents, and my personal favorite is their Lavender & Lemon. 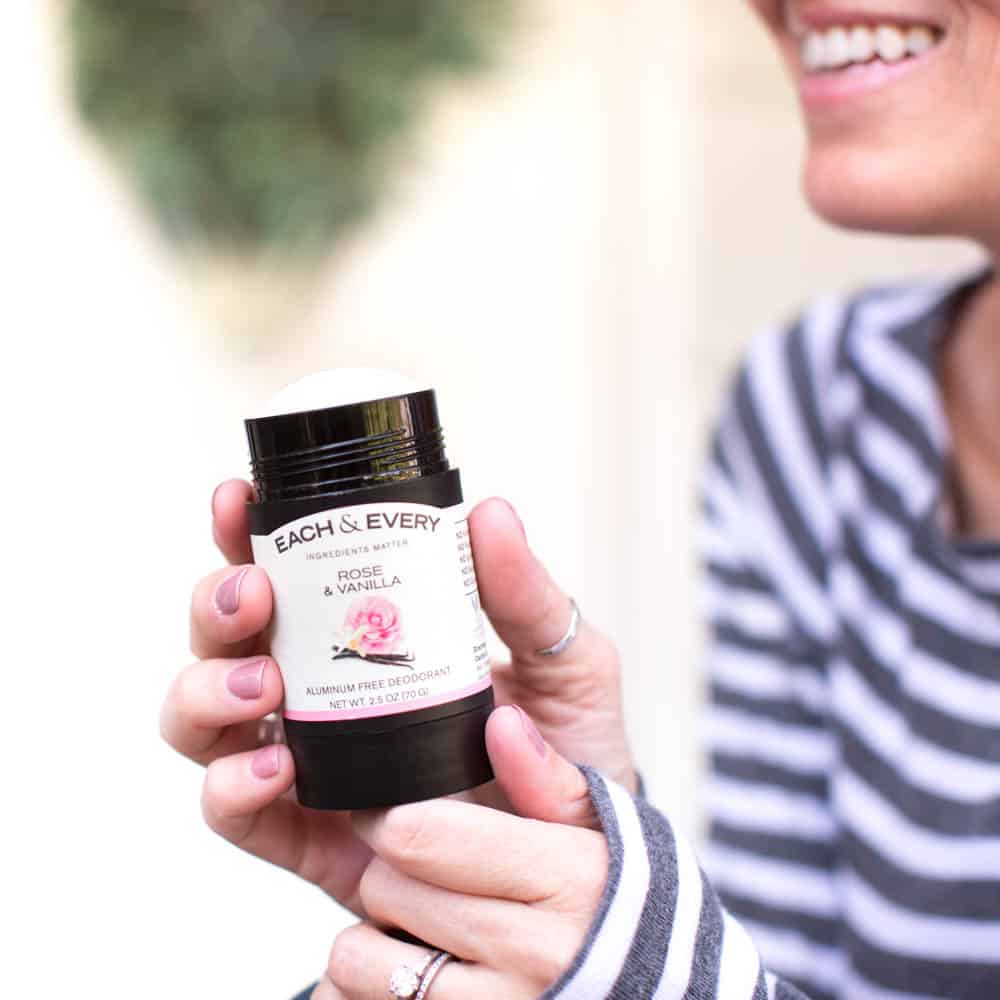 I’ve been focusing on the ladies, but what men’s vegan deodorant? This deodorant gets points because it’s one of my hubby’s favorites. My hubby is vegan and loves animals, but honestly, I was pretty sure he would reject vegan deodorants and stick with his long-loved ‘Old Spice.’ I got him a tube from Herban Cowboy so he could just give it a try, and now he always asks me to get him more! YES! A win for him (it’s way healthier than pore-clogging antiperspirants), for me (it smells divine!), and for animals (who don’t have to die). 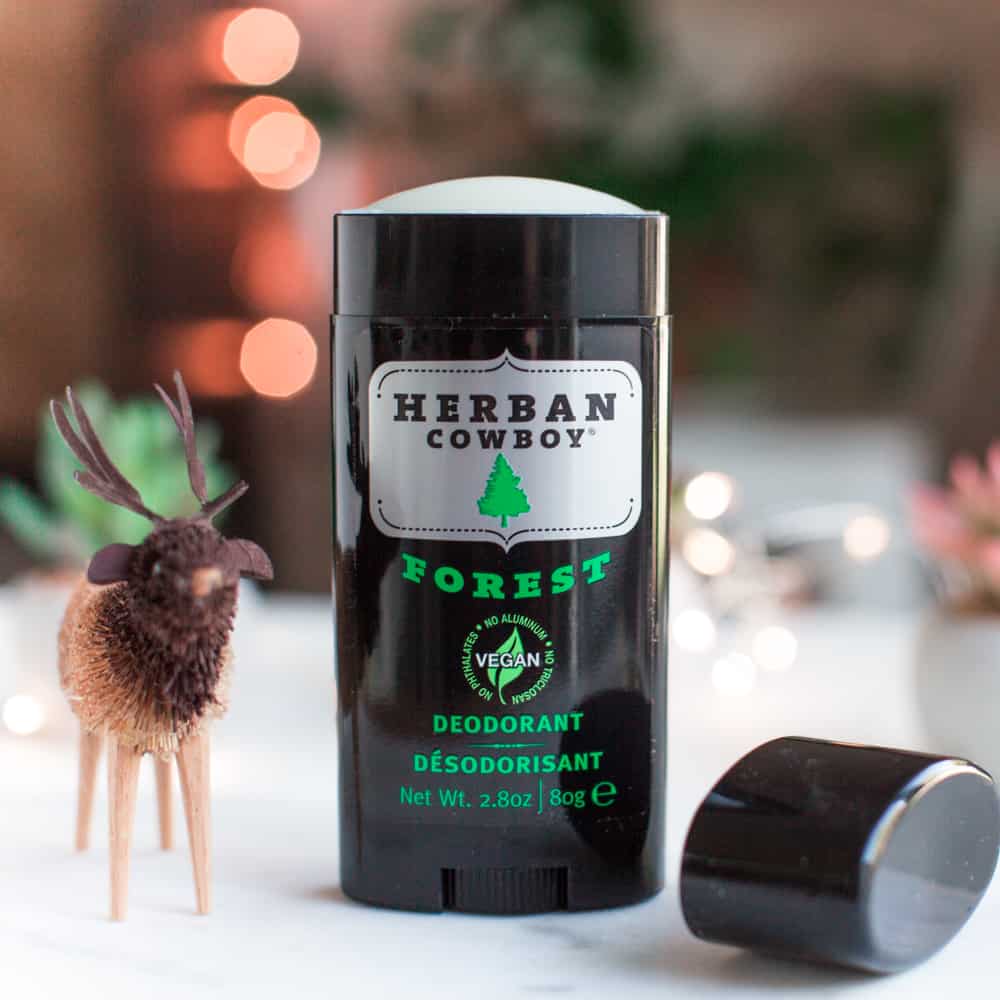 The Healthy Deodorant by Lavanila

The downside: It’s pricey. We’re talkin’ $12+ for a tube. But you guys. If you can afford it, it’s worth the investment. I personally love the Vanilla Grapefruit scent—it smells so good.

Note: Lavanila also sells miniature versions of these deodorants, so if you find these for significantly less money, it’s probably the mini version.

One day my friend Toni and I were at Sprouts sniffing all the cruelty-free deodorants we could find (yes—we are crazy). That’s how we stumbled upon this gem. This vegan deodorant from Nubian Heritage smells amazing, glides on oh-so-easily, and works great (for me and Toni, at least).

This is another hubby-fave. After falling for the Herban Cowboy deodorant, he has branched out and tried some others, and this is another he goes back to again and again.

This is a recent favorite of mine, and it’s what I’m wearing right now! In fact, for the past month, this has been my go-to. It’s a little lower on this list simply because it’s different from the ‘norm.’ It’s a cream deodorant served up in a pot, and to apply it you scoop a little amount on your finger and rub it in to clean pitties. Unlike many of the other deodorants in a jar out there, it’s super soft, not at all greasy, and really easy to rub in. The best part? It smells like white chocolate! I’m actually excited to put this on in the morning. 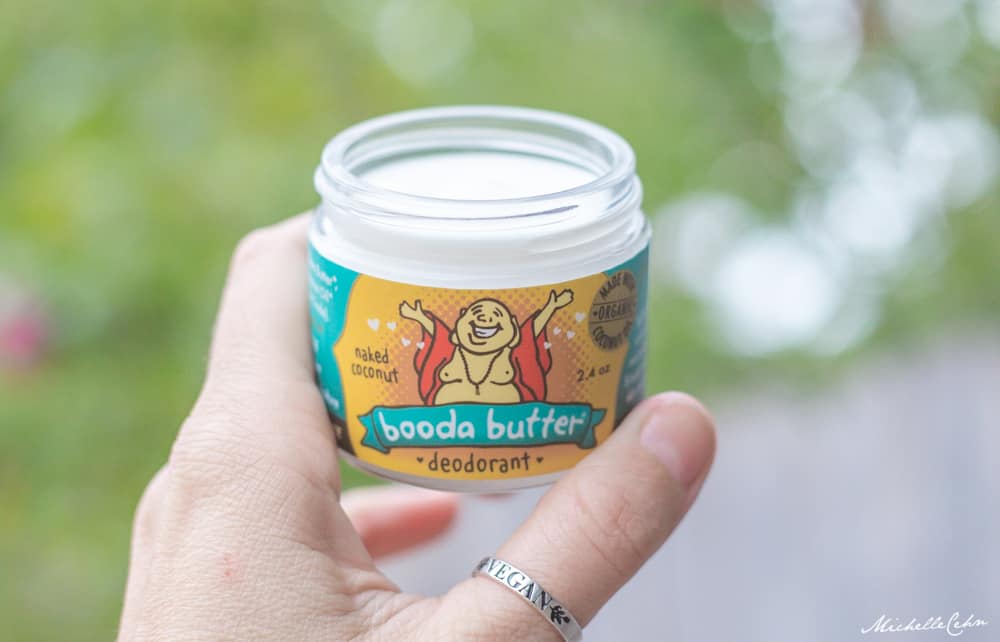 This round-up wouldn’t be complete without a shout-out to Schmidt’s. They are one of the most recognized vegan deodorant brands out there and they are innovating like crazy. When they first launched several years back, they only sold deodorant in little pots. Today, they have a whole range of traditional stick deodorants and they’re even branching out to offer soaps and beyond.

Schmidt’s deodorants have always worked quite well for me, and the only downside is that the application isn’t quite as smooth as the other options listed here. The sticks are a little gritty and get a bit messy over time, and the pots are on the harder side so it’s less elegant to scoop out the product and rub it into your skin. That said, I still use Schmidt’s regularly and love them because they are so natural and smell great! 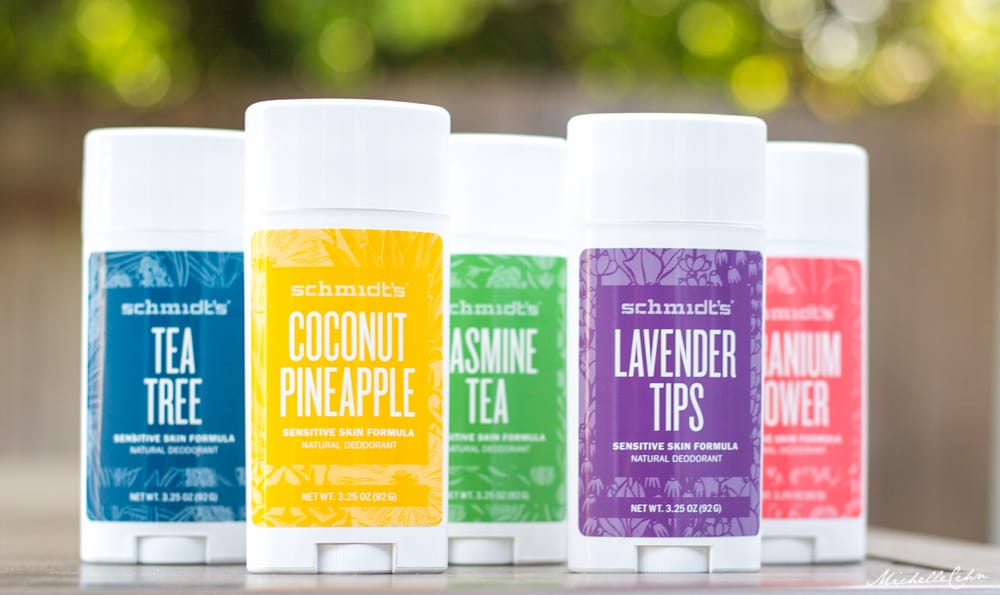 I was introduced to this deodorant by my birthmother who sent it to me as a gift. Hopefully not because I was stinky, but rather because she loved it so much 😉

I have to give a shout out to Crystal for being different, and one of the first natural deodorants on the market, dating back to the 1980s. The concept behind this deodorant is that it’s basically a big hunk of natural mineral salts that prevent bacteria (which is what makes us stink) from growing. You simply wet the crystal and rub it on your pitties. It doesn’t stop you from sweating, but it does keep bacteria at bay! Plus, it’s affordable and lasts seemingly forever.

Make Your Own DIY Deodorant

If you want to get really crafty, you can even make your own vegan deodorant with this recipe from The Compassionate Chick’s Guide to DIY Beauty! 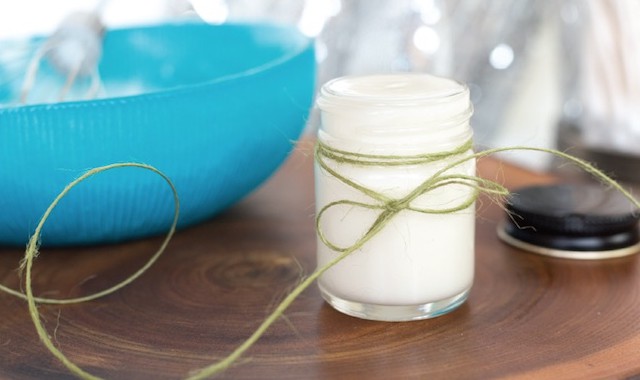 We can make this world a kinder place simply by giving our everyday product choices a little more TLC. I hope this article helps you do just that with your deodorant!

This post is not sponsored and all thoughts are my own. For your convenience, this article contains Amazon affiliate links which help us keep the lights on here at World of Vegan.

Your body will thank you! ☺️

AD • Ready for another veggie-inspired cocktail?

Let’s talk 💩! Did you know constipation 🚽

Have you heard of ratatouille before? No, not the