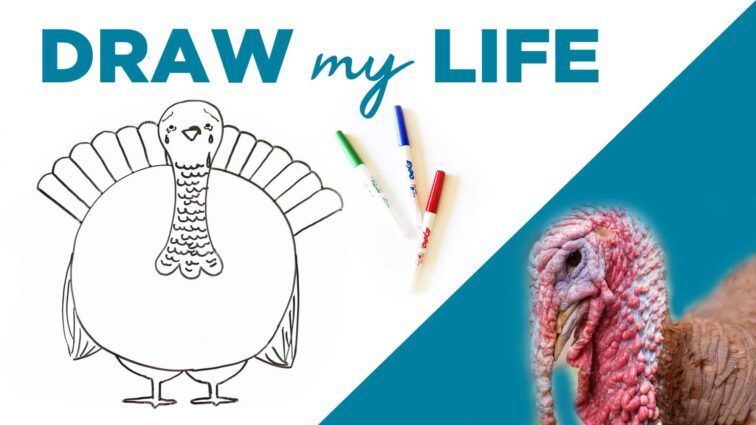 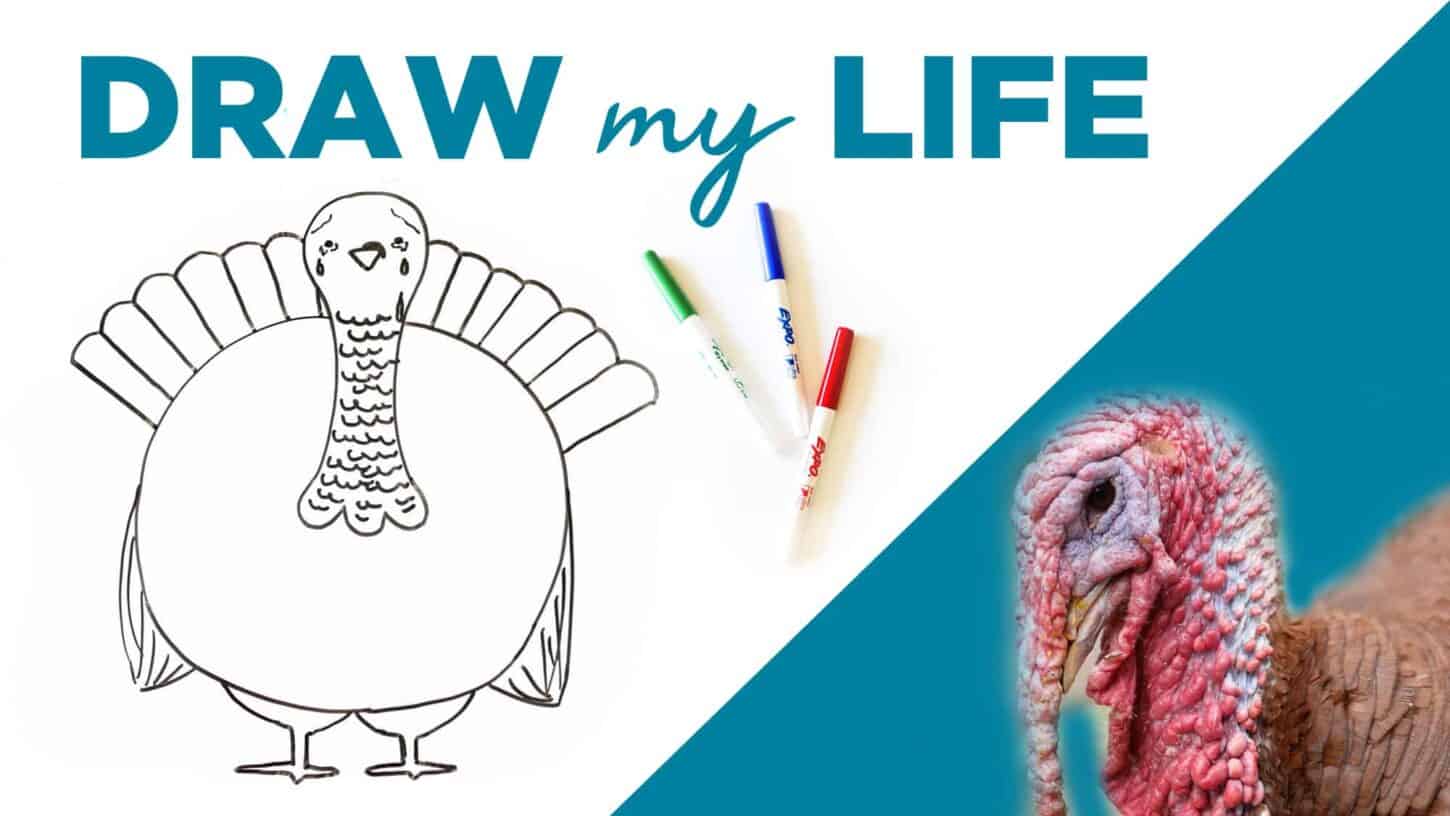 It’s finally here! Artist Sooyeon Jang and I have teamed up yet again to produce another illustrated “Draw My Life” video showcasing the heartbreaking life of a turkey in today’s world.

If you’re anything like me, you turn away when you see graphic undercover footage showing what’s happening behind the closed doors of factory farms. That’s exactly why Soo and I started making these videos. We wanted to find a way for people to see what’s happening to animals without having to watch the traumatizing real-life footage. We were able to do that through illustrated stories told from the perspective of the animal.

That picture in your mind of Old McDonald’s farm? A fairytale. I only wish that was my life. In reality, I’ve never touched grass or seen the sunshine. No, let me tell you what my life has actually been like. I’m going to give you a peek behind closed doors so you can see how that turkey dinner really gets to the table.

The way my life began was nothing like in nature. My mother was artificially inseminated. That’s right, semen violently collected from my father was manually inserted. I don’t want to go into too much detail because it is horrific and violating, but this is the norm in the turkey industry and deserves to be told. To impregnate a turkey a worker grabs her 20-pound body by the legs and holds her down as she beats her wings, struggling. The worker pushes her tail up so that her “vent” opens and forces the tube inside her to deliver a “shot” of semen.

This violating process of forced impregnation is actually a required part of turkey breeding these days because we’ve been genetically modified to grow with breasts so large that we couldn’t even ‘get it on’ the natural way if we were given the chance. So-called ‘commercial’ turkeys (which is what I am) weigh nearly double what our ancestors weighed less than 100 years ago.

My mom was just 8 months old when she laid my egg. But she would never get to meet me. My egg was scooped away from her that same day and sent to a ‘hatchery.’ My mother was denied the basic decency to care for and protect me, and I was denied her protection, love, and guidance. That was stolen from us by this industry.

Things don’t get better from there. My mom continued to be roughly inseminated once or twice a week for about a year until she was finally killed and turned into lunch meat, pot pies, or pet food.

Meanwhile, at the hatchery, my egg was incubated for about a month. As soon as I eagerly pecked my way out of the shell, seeing the world for the first time, big hands came toward me and grabbed my fragile newborn body. I was injected with all kinds of vaccinations because apparently without them I probably wouldn’t have survived the cramped, unsanitary conditions ahead of me.

Then a portion of my beak was seared off with a laser. My beak is sensitive, with many blood vessels and nerve endings, and the pain was unreal.  As if that wasn’t bad enough, my toes were then violently cut off to remove my claws. I would soon be packed so tightly together with other poults and turkeys that they didn’t want me to peck or scratch them and disturb our meat. It hurt—a lot.

This was my welcome to the world. 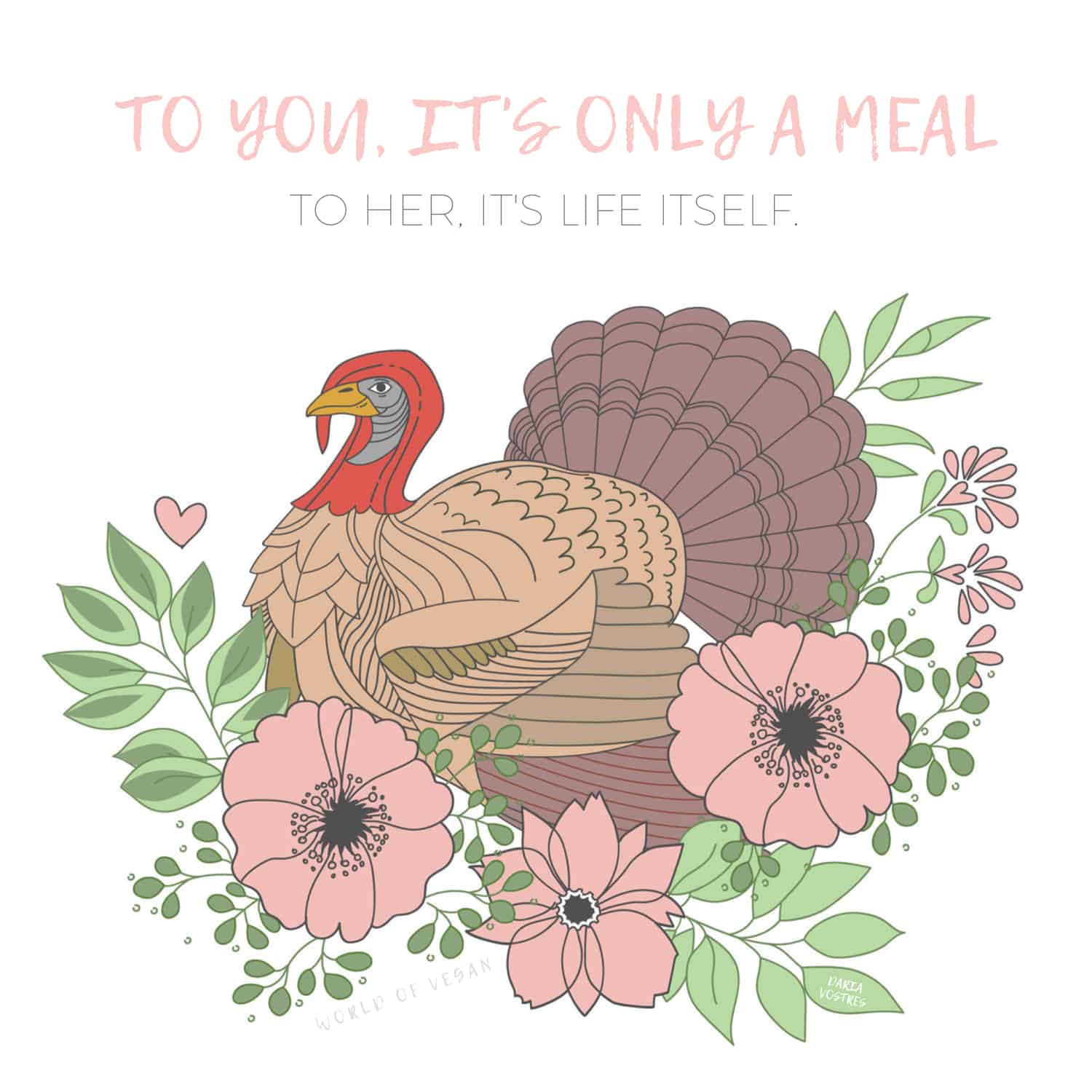 At one day old, I was transported to a turkey farm, where I was dumped into a massive barn with tons of other newborn turkeys. Feathers grew to replace my fuzzy down, and my body grew FAST. At 6 weeks old, I was dumped into another crowded, filthy, poorly ventilated industrial barn with lots of other turkeys. The smell of the putrid air irritated my lungs, poisoned by the buildup of the acidic waste all around us. I was hungry all the time, and my body grew so fast that my legs could barely support my unnatural weight. I languished here for a few months until I reached what they call “market weight.”

I was then snatched up shoved into a crate with the other turkeys—my wing crushed in the process. My body was jammed in so tightly I could barely move. The crate was tossed into a truck. The truck bounced along the road for hours. I felt sick from the motion, and the heat was relentless. There was no water or food. A neighboring turkey in my box stopped moving altogether. I realized he had died. I wouldn’t let that happen to me. I was going to make it. I would survive this. That’s what I told myself—what helped me hold on.

But then, as the truck swerved around a bend and pulled to a stop, I realized that the birds around me who perished in the truck were the lucky ones…because we had just arrived at a slaughterhouse.

The inside of this place is truly haunting—worse than any nightmare. The roaring sound of machines were drowning out the final outcries of my brothers and sisters. The stench of death was everywhere. We were roughly pulled out of the transport crates and shackled upside down one by one on a conveyor belt that was moving so fast the workers could barely keep up. A worker frantically grabbed my legs and flung me up into the shackles.

And that brings me to now. Hanging upside down, I can see the line of turkeys ahead of me flapping frantically, fighting for freedom that I now know will never come. I see the line moving toward electrified water. As the turkeys sink in, I watch as their bodies come out limp—paralyzed. A few somehow made it through still conscious, and I watch as they are dragged over throat-slicing blades, blood gushing out everywhere, as their eyes blink and then remain open—lifeless. The bodies are then dunked into scalding water that loosens their feathers.

She was still conscious when she was drowned alive in scalding hot water. She was then plucked, processed, packaged, and frozen to be shipped out to a grocery store in time for Thanksgiving.

There is no need for this cruelty and violence. Stand for a kinder world by keeping turkeys off your plate this Thanksgiving. There are so many delicious plant-based alternatives that don’t cause this needless suffering. You can find vegan turkey, an endless supply of vegan Thanksgiving recipes, and beyond here at World of Vegan and across the internet. 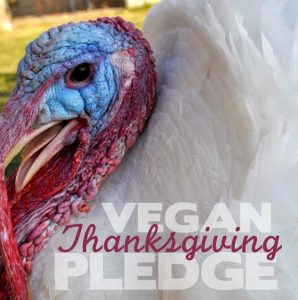 With a little thoughtfulness and creativity, you can enjoy a new kinder, happier, healthier Thanksgiving meal. And I hope you do! Check out our vegan Thanksgiving guide to get started.

About Our “Draw My Life” Videos

This is the fifth in our series of Draw My Life videos. So far, each of these videos has reached at least a million people, with our most recent dairy cow video reaching over 9 million viewers.

Thousands of comments have flooded in from people around the world who decided to go vegan after watching, and more are still coming in every single day. These are without a doubt the most impactful videos I’ve ever made, and I’m so eager to release this new Turkey video to help change the landscape of an American Thanksgiving table.

Many thanks to Harvest Home Sanctuary, Animal Place, and Mercy for Animals, Meaningful Paws, and all of our Patreon supporters for supporting this turkey Draw My Life video. And an extra special thanks to Eddie Plotts who has been supporting our World of Vegan videos through Patreon for years.