Home » All Posts » Holidays » Halloween » Are Sour Patch Kids Vegan? Here’s What You Need To Know!

Are Sour Patch Kids Vegan? Here’s What You Need To Know! 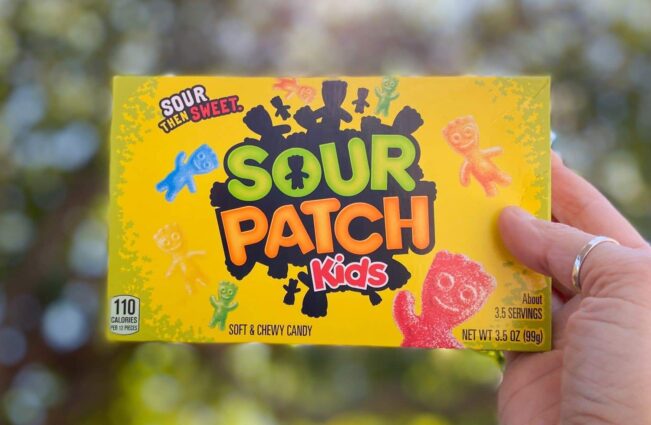 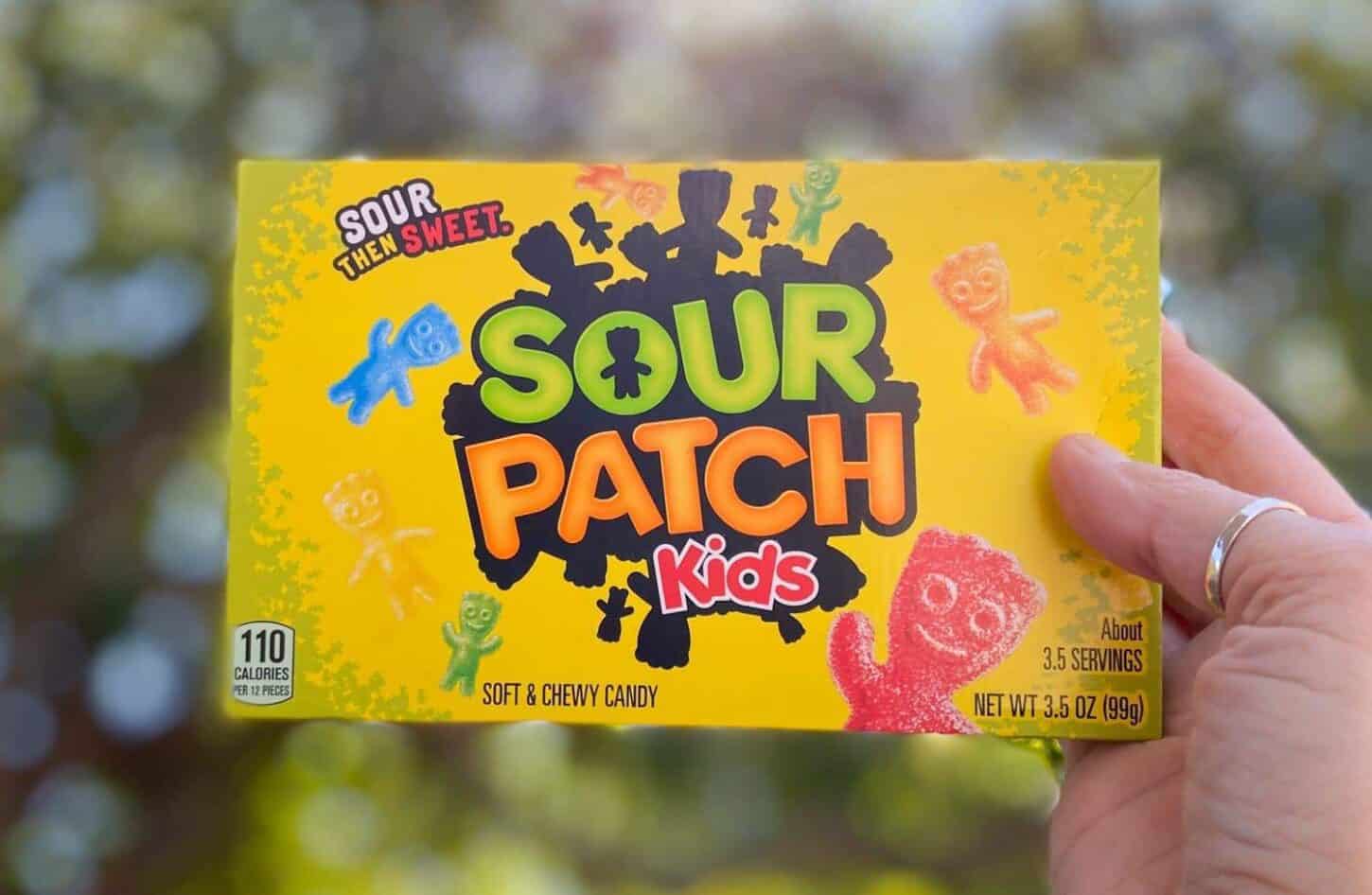 You may be looking for vegan candy to grab at the movie theater, to fill your Halloween needs, or to fill an Easter basket. Either way, you’re wondering: are popular Sour Patch Kids vegan? Most gummy candy contains gelatin, which is not even vegetarian. But Sour Patch Kids are gelatin-free, so are they vegetarian, vegan, and dairy-free? In this article we’ll cover the Sour Patch Kids ingredients. We’ll answer questions like: “Are Sour Patch Kids gluten-free?” And we’ll discuss the vegan status of the most controversial ingredient: sugar.

It’s true that opposites attract, which is what makes the contrasting sweet and sour flavors of Sour Patch Kids so addictive. Tart and tangy on the outside yet sweet and fruity on the inside, each bite is a little bit different, creating a crave-worthy rush that’s entirely unique to this bold candy. They look like tiny humans, but it’s safe to say they aren’t made from people. Have you ever stopped to wonder, what ARE they made of, and are they vegan? Let’s take a big bite out of this sugar-coated question.

What Are Sour Patch Kids?

Originally named “Mars Men” when they launched in the 1970s to capitalize on the space race that captured the imaginations of kids and adults alike, Sour Patch Kids have gone through many revisions over the years. In 1985, they morphed into children following the wild success of Cabbage Patch Kids dolls when they hit US markets. Now owned by parent company Mondelez, makers of Oreos and other snack foods, Sour Patch Kids are sold across the world under a few different names. In France, they’re call “Very Bad Kids,” while they go by the similar but far less catchy name of “Maynards Sour Patch Kids” in the UK and Canada.

Given such wide distribution, it should come as no surprise that Sour Patch Kids are produced in many different factories. Unfortunately, not all factories use precisely the same formula, so the ingredients differ depending on which country you purchase them in. The biggest difference is the use of natural or artificial colors.

What Are Sour Patch Kids Made Of?

With that disparity in mind, let’s take a look at the label of Sour Patch Kids that are produced and sold in the US.

Let’s dive into each.

Sugar: Making up the bulk of this candy, simple granulated sugar is a potentially controversial ingredient. Is sugar vegan? Here’s our perspective on that (we do consider sugar vegan). Though it comes from either sugarcane or sugar beets which are naturally plant-based, the way it’s process may not be. Some manufacturers clarify their sugar through bone char, which comes from ground animal bones. There’s no way of knowing at a glance since this doesn’t need to be disclosed on the label. It can be a bit of a gamble, so whether you’re comfortable with that or not is up to you.

Invert sugar: Combining fructose and dextrose to make a strong, sticky syrup, this ingredient helps prevent crystallization during the candy making process. It’s what makes sugar sculptures come to life in the hands of professional pastry chefs, too.

Corn syrup: Distinctly separate from high fructose corn syrup, plain corn syrup is made by refining the sugars inherent in corn, creating a thick and gooey light golden syrup that helps create the soft, chewy texture in this treat.

Modified corn starch: Don’t worry, “modified” doesn’t meant genetically modified in this case. It just implies that the starch as been further treated, through heat, acids, or electricity, to change the properties to make a better candy structure.

Tartaric acid: This is what gives the candies their distinctive sour bite! Tartaric acid is naturally derived from many plants, especially in grapes and tamarind.

Citric acid: Found in all citrus fruits like lemons and limes, this secondary sour flavor adds more depth and contrast to the outer coating.

Natural and artificial flavor: No, you can’t pretend like you’re eating a serving of fruit with your snack here. These flavors are more like baking extracts rather than whole fruit purees.

Artificial colors (yellow #6, red #40, yellow #5, blue #1): Real fruits can only dream of such wild and bold hues! These colors come from science, not nature.

Titanium dioxide: This fine powder provides a bright, white pigment to a wide range of foods and cosmetics. In this case, it makes the exterior sour coating stand out against the brightly colored gummy centers.

So… Are Sour Patch Kids Vegan or Not?

The final verdict is… Maybe! It largely depends on your judgement whether or not you consider Sour Patch Kids to be “accidentally” vegan friendly. Going by the list of ingredients: Yes, Sour Patch Kids are vegan! Unlike many other soft, chewy candies, there is no gelatin or eggs used to create that bouncy texture.

However, if you take the unknown processing of the sugar into account, in addition to evidence that parent company Mondelez does use bone char in other products: No, Sour Patch Kids are not vegan. As a matter of ethics, it’s up to you to decide what you’re most comfortable with. If it’s an issue of extreme allergies, it’s not ever safe to take such a risk.

In additional to the original rainbow, there have been many spin-off flavors for various holidays, promotions, and different cravings. These different choices may come and go, but the good news is that they all share roughly the same list of accidentally vegan ingredients. Here’s what you can expect to find on shelves in the US when you want a fun change of pace:

Yes, Sour Patch Kids are gluten-free! Gluten is a protein found in wheat and some grains and is not present in the ingredients. However, Sour Patch Kids are not gluten-free certified, meaning they may be made in a facility that also produces gluten products, and trace gluten could be accidentally present in the final product. If you have an extreme sensitivity to gluten or want celiac-approved candy, find a differet vegan candy option with the label guarantee.

Yes! There is zero dairy in the ingredients of Sour Patch Kids. In fact, all vegan products are also dairy-free by default. If a product is vegan, it is also gluten-free.

Yes, technically! Red #40 is a food additive commonly used in candies (like Red Vines) and other processed or packaged foods and drinks. It’s a synthetic coloring dye made in a laboratory from petroleum. It contains no animal ingredients or insect products or byproducts. The ingredients are fully vegan. However, Red #40 is not cruelty-free, as it has been tested on animals (mice, rats, dogs, rabbits, pigs) which is a FDA requirement for all synthetic food additives.

Can You Make Sour Patch Kids At Home?

If you’re a fan of fun DIY projects or simply want a slightly healthier alternative, you’re in luck! It’s quite easy to make your own Sour Patch Kids from scratch. You can use any shapes you like for the molds, or simply pour the mixture into a plain baking pan to cut squares out of once set.

For an incredibly simple 3-ingredient approach, you can’t find a better formula than this recipe that calls for just citrus fruits, sugar, and citric acid. As an added bonus, you get a decent dose of vitamin C along with your treat!

What other popular brands, candies, and foods are vegan? What are some delicious vegan sweets and desserts you can make from scratch to satisfy those sugar cravings? How can you celebrate a totally vegan Halloween? Take a look at our guides below:

If you were wondering — are sour patch kids vegan? — we hope this guide helped you out. This article was written with support from Hannah Kaminsky. Thoughts are our own, and we have no affiliation with the Sour Patch Kids brand. Please note that this article may contain affiliate links which supports our work at World of Vegan.