How to Order Vegan at Domino’s Pizza

share this post
Wondering what you can order that's vegan at Domino's Pizza? This guide outlines everything on the menu that's plant-based at each of their 6,000+ franchises. From the crusts and toppings, to the sauces, dips, pasta, and sandwich––we'll share it all with you. There are a lot of options, they're just all cheese-less and meat-less since Domino's doesn't currently offer vegan cheese or vegan meat. 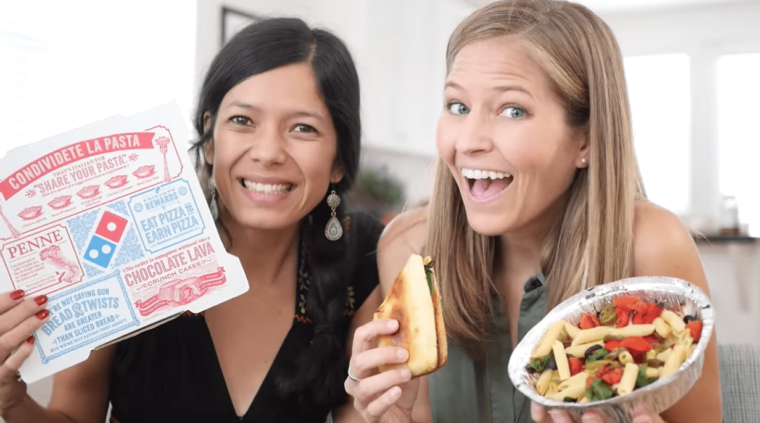 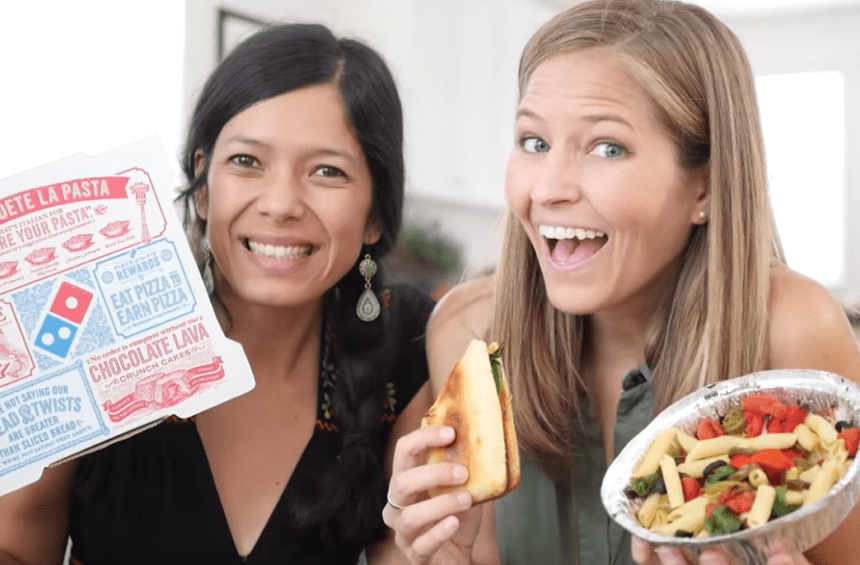 Have you ever been hanging out with friends when they decide to go grab pizza at a notoriously not-vegan-friendly pizzeria? We’ve been there. Or, even worse…have you ever called your local pizza chain to order a veganized pizza only to hear a long silence on the other side of the phone, followed by…

As much as we strive to eat healthy and wholesome meals, sometimes we just gotta order something fast and convenient. You know, those times when life gets busy, or you’re traveling without access to fresh food, or you find yourself on a late-night pizza excursion with friends.

For any number of reasons, you may find yourself at Domino’s one day wondering what the heck you can order that’s vegan. And friends, when that day comes, we’ve got your back.

It may seem like your choices are limited simply because there aren’t any labeled vegan options, but there’s no need to worry! There’s actually quite a lot you can find on the menu that’s vegan at Domino’s.

Domino’s currently has just one vegan-compliant pizza crust (and no vegan meats or cheeses in the US), but they’ve got lots of sauces and toppings. We’ve laid them out for your below. And to take it one step further, Michelle Cehn, Toni Okamoto and Vince Lia, filmed a video taking us through the steps of ordering the best of vegan at Domino’s.

Spoiler alert! It’s not just about eliminating non-vegan ingredients from the menu classics. That would be really boring food! You have to double up on the “accidentally vegan” ones. Their chunky robust tomato sauce, yummy jalapeños, and garlic dipping sauce make any vegan version of their pizzas better.

Menu Items That Are Vegan At Dominos

Note: The Brooklyn, Handmade Pan, Hand Tossed, and Gluten-Free crusts all contain a milk by-product or honey, so they are not vegan.

Note: The Mild Buffalo Wing Sauce contains milk, so make sure to choose the hot version instead.

Note: The Breadstick Seasoning is not vegan-friendly because milk is listed in the ingredients.

Make sure you double check for updated information from the restaurant since they can change their recipes without notice!

With more than 6,500 locations across the U.S alone, it’s likely you may have one near you. So… the next time your friends want to go casual and grab lunch at this pizza chain you’ll be readily prepared to be the “easy going vegan friend.”

How to Order a Vegan Pizza at Dominos

How to Order Vegan Pasta from Dominos

Sample Pasta Order: Choose the Build Your Own Pasta meal with no sauce, and with onions, roasted red peppers, spinach, diced tomatoes, black olives, green peppers, and jalapeno peppers. Add a side of garlic sauce or marinara dipping sauce (not the pizza sauce) for extra flavor. 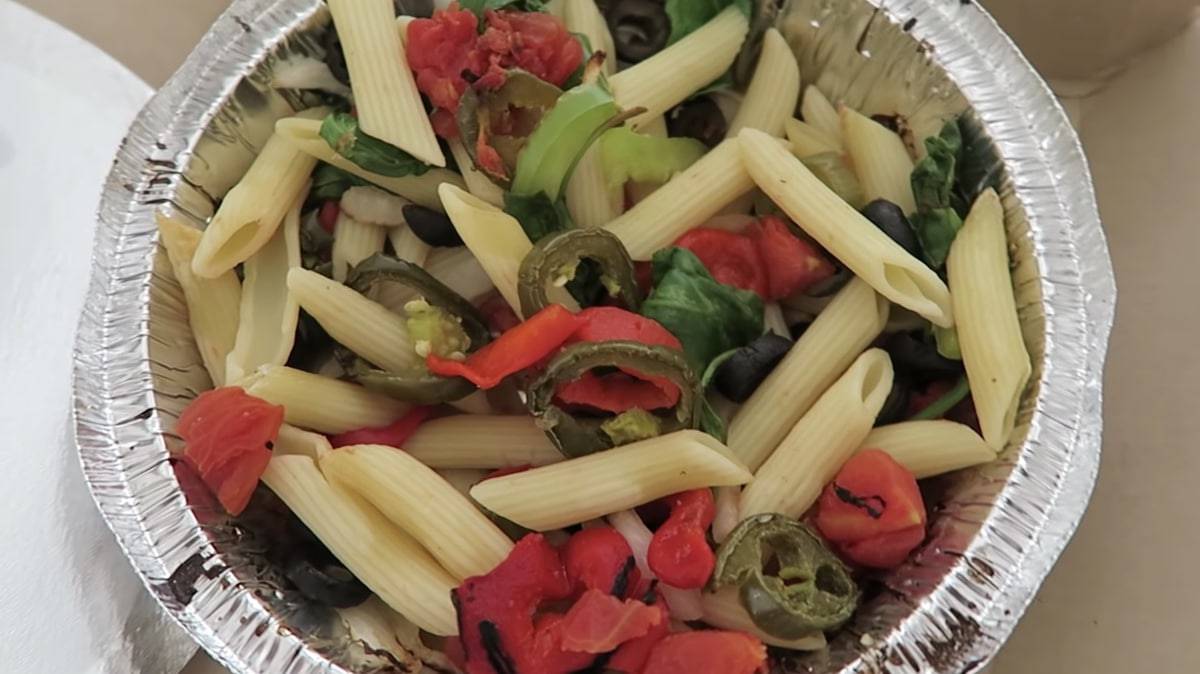 How to Order Vegan Sandwich at Dominos

Sample Sandwich Order: Mediterranean veggie sandwich with no cheese. Make sure to choose the sandwich/artisan bread, which is vegan-friendly. Add a side of garlic sauce, marinara, or barbecue dipping sauce for extra flavor.

Is the gluten-free crust vegan at Domino’s?

We’re sorry to say that it’s not vegan. Usually, gluten-free foods contain eggs. But, in this case, the pizza crust is free of eggs, but includes honey as an ingredient.

Are any of the breads or twists vegan at Domino’s?

Unfortunately, none of them are vegan-friendly. They all include milk in their ingredient lists.

I love the garlic oil at Domino’s Pizza. Is it vegan-friendly?

Nope. The garlic oil blend contains parmesan cheese. Instead, try the garlic and herb seasonings to get a similar flavor.

Which pizza sauces are vegan at Domino’s?

Only the Robust Inspired Tomato Sauce is vegan-friendly. The rest contain milk ingredients, including the Hearty Marinara Sauce, which is disappointing and somewhat misleading.

Are the croutons vegan-friendly at Domino’s Pizza?

The croutons are not vegan. They contain a milk ingredient, so you’ll need to ask for food without them.

Can I order a bread bowl at Domino’s and fill it with veggies and sauce?

No, the bread bowls are made with milk ingredients so they would not be vegan. If the bread bowl was dairy-free, this would be a great option.

All this said, when you have the option to go to a vegan-friendly pizzeria, do it! While Domino’s can save you from starving for a meal or two, it’s never going to knock your socks off. Lucky for you, there are hundreds (maybe even thousands) of vegan-friendly pizza parlors opening up across the globe with incredible vegan options—we’re takin’ vegan cheese, meats, creative sauces, and more.

Here are some growing pizza chains that offer vegan meats and/or cheeses:

Although Domino’s is known for not being very vegan-friendly, we don’t want to give up hope that they will change their mind and make vegan cheese a menu item. There are so many more vegan-friendly pizza places popping up all over the country (and the world!), so we’re going to keep our fingers crossed that Domino’s Pizza will become a part of it all. We’re dreaming of the day when appealing alternatives might be added to their meat-heavy menu – like dairy-free cheese, plant-based meats, and sweet, decadent vegan desserts. Until then, we can always write to, call, or contact the managers of any location to make our requests.

How to Order Vegan At Other Chains

Want to get some guidance on how to order vegan at other fast food places? Check these out!

Have you found any other options to be veganizable? Did you find a winner? Let us know by tagging #worldofvegan and sharing your vegan-at-Dominos creations with all of us!