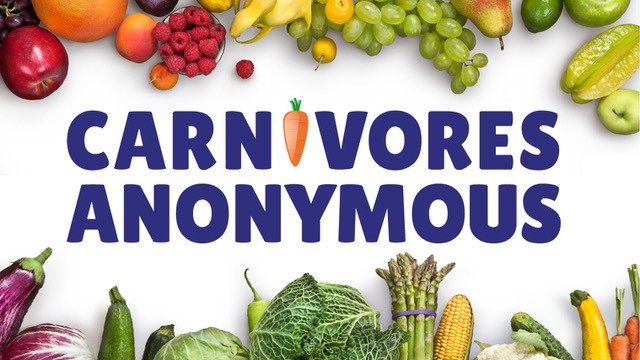 For some people, making the choice to go vegan is as simple as watching “Earthlings” or “What the Health.” For others, it is much more difficult. Food addiction, specifically the addiction to meat and dairy, can keep even the most strong-willed and well-intentioned person from adopting a plant-based lifestyle.

The addictive nature of meat and dairy products is a prime reason why many people simply refuse veganism with statements like “I just can’t live without cheese” or “There’s no way I could give up bacon.”

In Defense of Animals, an international animal protection organization founded in 1983, is tackling meat and dairy addiction head-on with their brand-new group, Carnivores Anonymous. This group is based on the 12-steps, like other successful and longstanding addiction programs such as Alcoholics Anonymous, Narcotics Anonymous, and Overeaters Anonymous.

“Animal products are a huge danger to our health, our environment, and our economy, causing a raft of health problems and early death. Carnivores Anonymous works to raise awareness of the harmful effects of animal products and help people kick the habit,” explains In Defense of Animals’ President Marilyn Kroplick, MD.

Group members also have the opportunity to share their personal experiences with meat and dairy addiction while supporting others facing the same challenges. Dr. Kroplick discusses some of the common obstacles that meat-eaters face when shifting to plant-based eating:

The biggest challenge is the social conditioning through government-funded advertisements that have convinced us that animal products are necessary for a healthy diet. This is so dangerous because even doctors, most with little to no nutritional training, are instructing their patients to consume dairy products to keep their bones strong (to which there is absolutely no evidence of, and in fact evidence that dairy can harm bone health) or to consume fish or chicken for protein, which is harmful for health and is completely unnecessary when protein requirements can be easily met through a plant-based whole-foods diet. This compiled with the food addiction that comes with any processed hyper-palatable food, makes it very challenging to break out of the social norm.

This month’s Carnivores Anonymous speaker is Amy Jean Davis, a prominent and respected voice in the vegan and animal rights community of Los Angeles. Amy has been vegan for the last 15 years and owns a micro sanctuary for animals called Love Always Sanctuary. You may recognize Amy from American Idol, where she made it to the top 24 contestants in 2008.

In 2016, Amy began organizing LA Animal Save, the Los Angeles chapter of The Save Movement, founded by Anita Krajnc. Amy also works for Nation Earth, the production company behind EARTHLINGS and UNITY documentaries. Amy will be sharing her knowledge and experiences to inspire Carnivores Anonymous members to make healthier, compassionate food choices.

“The first Carnivores Anonymous meeting was a big success. The group was a blend of members interested in going plant-based, others that had just started eating plant-based, and plant-based veterans. All participants brought something to the table, whether it being our current struggles with people around us, the health improvements we’re starting to see, or the strategies that have helped us succeed,” says Dr. Marilyn Kroplick.

So, what if you’re interested in attending a meeting, but you don’t live in Woodland Hills area? Not to worry! In Defense of Animals is establishing new Carnivores Anonymous groups throughout the United States. Start a group in your area and keep up to date via the CA Facebook page and website.