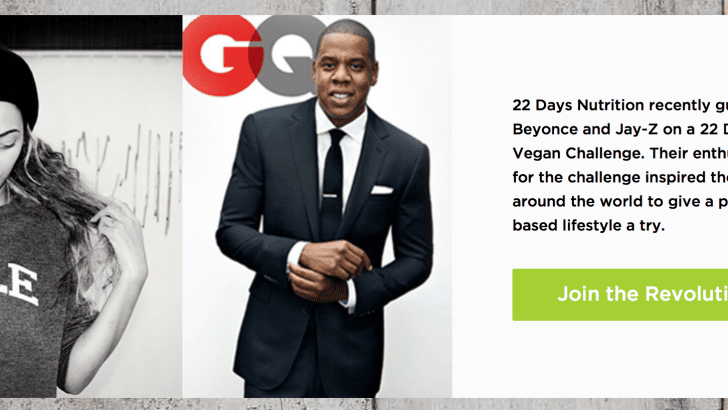 Beyonce and Jay-Z made waves in the news when they embarked on a 22-day vegan challenge back in 2013. Well, just over one year later, Beyonce has teamed with her trainer Marco Borges to launch a completely vegan meal delivery service with the company 22 Days Nutrition.

The concept behind this company is brilliant. The consensus is that it takes 21 days to break a habit, so by 22nd day, the struggle is theoretically over, and the new behavior has been established. And with this vegan meal delivery program, Beyonce is making it as easy as a few clicks of the mouse to get healthy meals during the first 21 challenging days!

Why is this so significant? With more than 67 million followers on Facebook, Beyonce’s influence speaks for itself. Since this news broke in early February 2015, more than 600,000 articles have been published on the topic (via Google). The amount of free positive press that this new initiative has brought forth about veganism is remarkable. It has been covered by Time, The Huffington Post, Business Insider, Yahoo News, and so many more news outlets. It’s precisely this sort of widespread media attention that has made “vegan” a household word.

Beyonce is a strong, beautiful, successful, healthy woman—and while she is not perfect (who is?)—it is inspiring to have her paving a path for more new vegans.

There is no perfect vegan!

Update: There has been some backlash from vegans criticizing Beyonce for her inconsistencies. How could she wear fur while touting veganism? How can she call herself vegan when she does it for health reasons and not for animals? Here is a great live discussion between Whitney Lauritson (Eco-Vegan Gal), Colleen Patrick-Groudreau (Joyful Vegan), and Michelle Cehn (Vegan Break), about this topic:

It is important to remember how we each got where we are today. Except for a very small minority of people who were raised vegan, we started off eating meat, wearing leather, and thinking nothing of it. We all went through a period of transition, and usually an even greater period of learning about the issues before that. At any point along that path, wasn’t it helpful and inspiring to receive support, suggestions, and uplifting encouragement? Try to focus on the positive steps that people are taking to make the world a better place. If we lead by example and providing support to others, the rest will follow.

Can’t even believe 🤯 one year ago I was just

Whenever I want a simple, #vegan, #budget-friendly

“Plant-based diets have long been known to promo

Two of the most common questions I’m asked are:

Cows milk, that is. 🚬🥛 But milk lovers, ther

Have you ever tried hummus pasta? This protein-pac