Draw My Life: A Pig’s Life In Today’s World 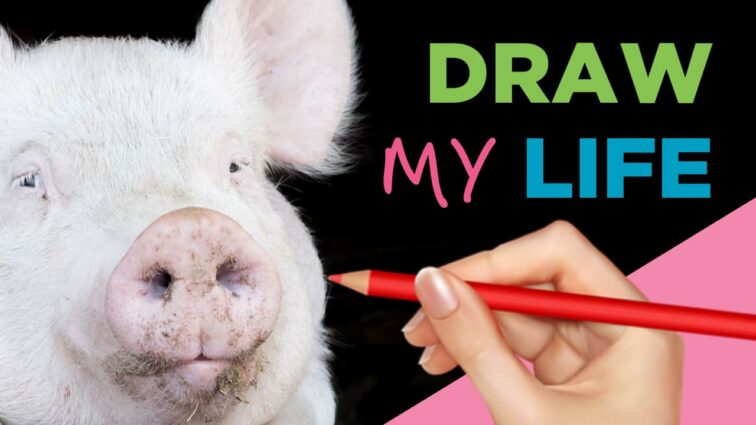 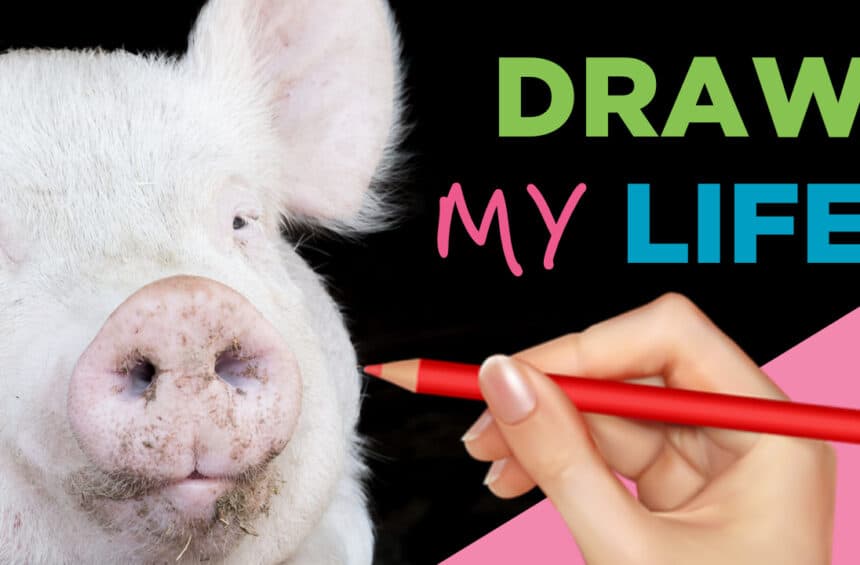 Hi there. I’m a pig and here’s my story. You might expect that my life is like the pig in the movie Babe. Full of playful moments with other animals. But that’s not my story at all.

My life started out rough, and it’s only gotten worse. You see, just like nearly all pigs in the United States, I was raised on a factory farm. I was born on a hard, wet, urine soaked floor with my 9 siblings. My mother was confined in a farrowing crate so tight she that couldn’t even turn around. She’d already gone through 5 pregnancies by the time I was born, and she’s never had a single moment outdoors. 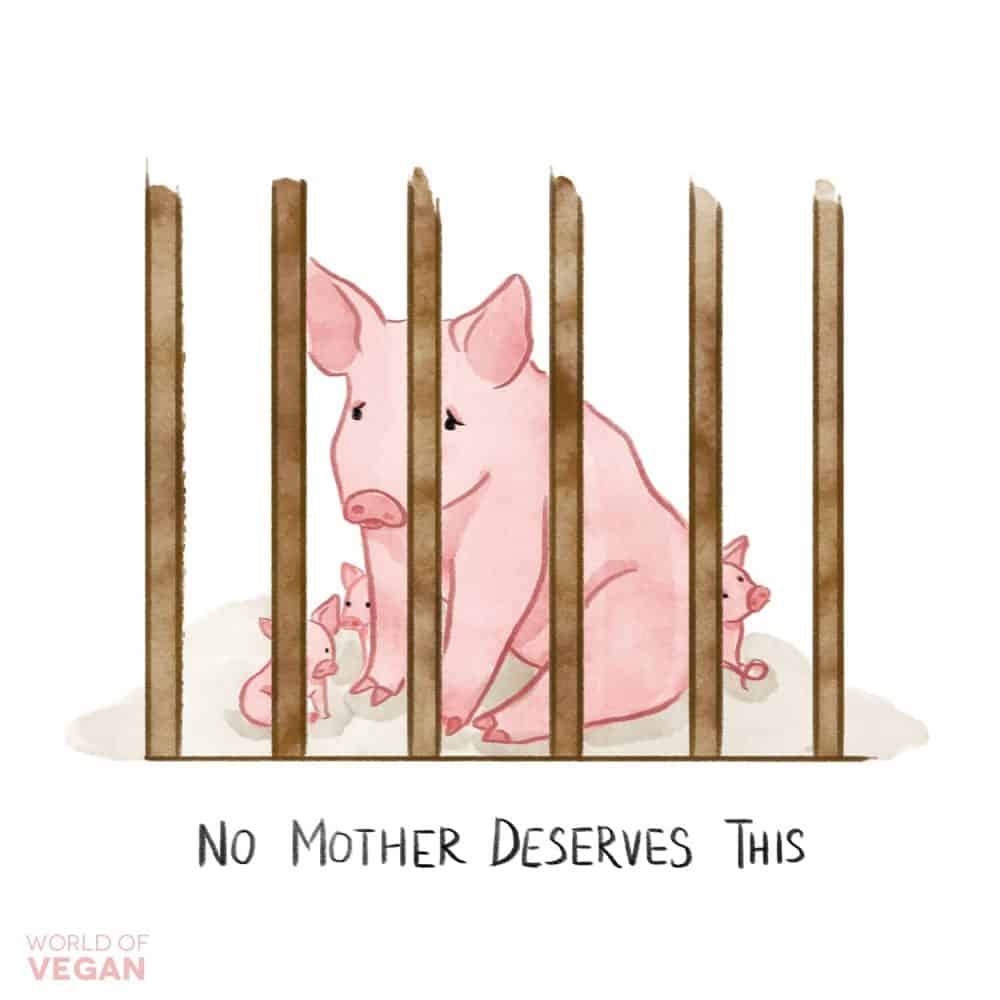 When I was just a few days old I was grabbed up by one of the humans. I squealed and kicked but couldn’t get away. He took some sharp clippers and cut off my tail, leaving only a tiny stub. Then he cut open my scrotum tearing out my testicles. Next, he forced open my mouth and cut the ends off two of my teeth. And then he cut deep notched into my ears. All of this happened without a drop of anesthetic. I felt every agonizing cut and tear. And my case wasn’t the least bit unusual. This is what’s done to every piglet raised on a factory farm.

It wasn’t long after that—when I was only 3 weeks old—that I was taken from my mother. She screamed as I was carried away, but it was no use. That was the last time I saw her.

I was taken to another building, and for the next seven weeks, I was stuck in a terribly crowded pen with more than 20 other pigs. We walked around on slated concrete, and our waste fell through into a huge pit dug under the building. You can imagine the horrible smelling fumes from all this manure and urine.

After a few more traumatic location transfers, I was given a shot of the drug ractopamine which caused my body to start putting on more muscle. After 5 painful months on this earth, I already weighed more than 200 pounds. I was in terrible health. I had trouble breathing because the ammonia choked air had eaten lesions into my lungs.

But I could still walk when the men came, yelling at us and stabbing us with electric prods as we were hurried on to the truck. There were little holes in the sides of the truck, and I had moments when I could see humans, warm in their neighboring cars, peering back into my eyes as we were being trucked through the freezing cold. And that brings me to now.

The truck just pulled up to a building and I’m terrified. Each of us knows we’ve arrived at a bad, bad place. All the pigs around me are panicking. I feel a shock as a man shoves an electric prod into my back and I fumble forward off the truck landing in a pen. The gate opens and I desperately try not to go through it, but the men with prods force us forward into a shoot. I land in a small chamber with several other pigs.

The chamber lowers down and our air turns to noxious gas. I frantically try to climb out and reach fresh air, but the horrible gas is inescapable. It hurts to breathe. We’re all in agony, trying to get our noses up as high as possible to reach breathable air. One by one we collapse in this gas chamber.

After he passes out his body is hoisted into the air by his leg and his throat is cut. The blood and life drain from his body. He’s disemboweled, skinned, and then butchered for bacon and other cuts of meat that soon make its way to the grocery store, neatly packaged in cellophane, with no indication of the life it once was. Too few of us consider the source of our food. But please remember that when we eat bacon, ham, sausages, or other pork products, our food had a face and a story. And that story didn’t have a happy ending, a happy middle, or a happy beginning.

But we can each help create a better story. We can create a story in which humans treat other animals with kindness rather than cruelty. By choosing vegan foods, we can prevent unimaginable amounts of cruelty and suffering, and help build a kinder world for us all.

Help end this unnecessary cruelty by leaving pigs off your plate and choosing vegan food. You can find tons of recipes here at World of Vegan, plant-based meal plans, guides, and hundreds of helpful videos that show you how to healthfully and happily transition to a plant-based diet. Each one of us has a massive power within us to make a difference for animals like this pig—use it! 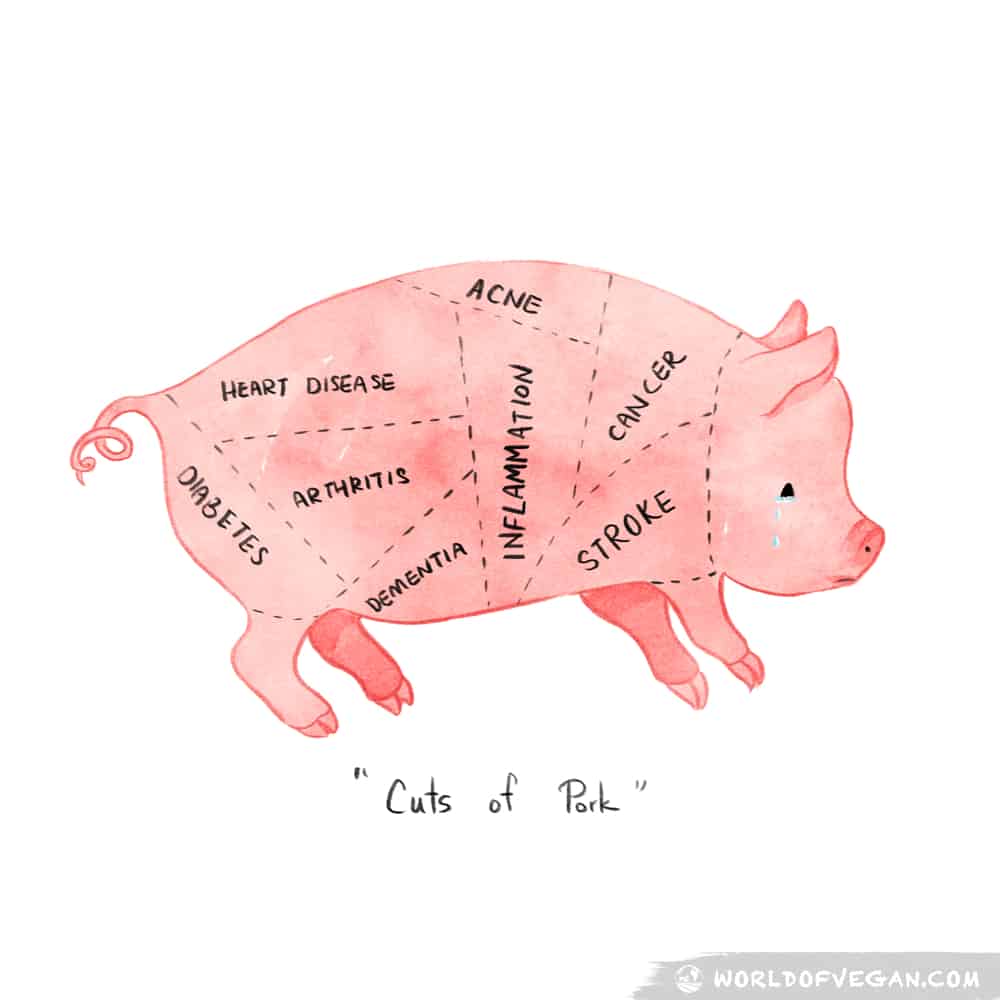 Have you seen our other animal Draw My Life videos? We’ve done illustrated Draw My Life videos featuring a dairy cow, a Thanksgiving turkey, a dog in the South Korean dog meat trade, and more. You can stay tuned for our future videos by subscribing to the World of Vegan channel on YouTube!