You Are Here: Home → Is it Safe to Eat Foods Containing Carrageenan?

Is it Safe to Eat Foods Containing Carrageenan? 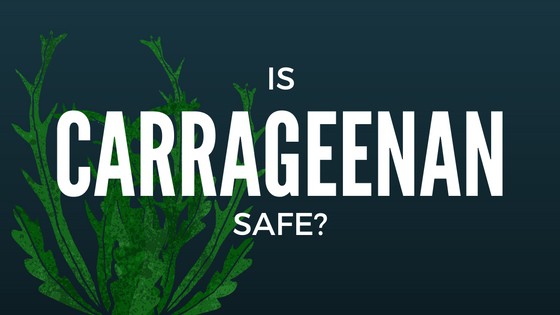 You may have heard that carrageenan, a food additive derived from seaweed that is commonly used as a thickener, is not good for you and you should avoid all foods that contain it (such as plant milks and cheeses). The claim that made headlines a few years ago was that it can exacerbate inflammatory bowel disease and promote inflammation.

These claims were based on limited, weak evidence. The media has a tendency of misinterpreting research, assigning cause-and-effect and inappropriately extrapolating results. Concerns surrounded study results showing an increase of ulcerative colitis risk when guinea pigs were administered large quantities of carrageenan. Turns out humans are not guinea pigs and this outcome was not found in studies including other rodents, pigs, monkeys or humans. In other words, this is a “species-specific phenomenon”. Nonetheless, some suspicious results occurred in petri dishes of human embryonic lung cells as well as liver and intestinal cells. Still, no evidence to tell us the effect of carrageenan in human beings.

In response to mounting concerns, the FDA sought safety committee input on this food additive, which has been “generally recognized as safe” since 1973, and in 2015 concluded, “[w]hile no evidence in the available information on undegraded carrageenan demonstrates a hazard to the public when it is used at levels that are now current and in the manner now practiced, uncertainties exist requiring that additional studies should be conducted.”

The latest buzz surrounds the recent publication of another in vitro study that found not only did carrageenan not promote inflammation or toxicity, but that human intestinal cells didn’t even absorb it. Study authors and the International Food Additives Council take these results very seriously and hope they put the kibosh on fears of carrageenan causing intestinal damage in humans.

So while we still don’t have high-quality human trials to prove the safety of carrageenan consumption, we do know that enjoying a variety of whole plant foods daily and limiting highly refined foods with solid fats and added sugars is best for health. If you have a medical condition such as inflammatory bowel disease and want individualized nutrition information, see a registered dietitian nutritionist.

Disclaimer: The information presented here is not to be construed as medical advice or used to diagnose, treat, cure or prevent any condition or disease.